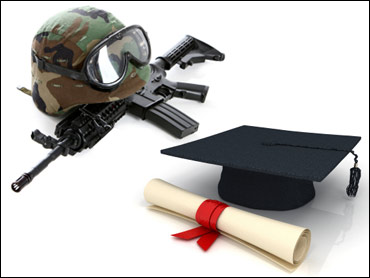 PL 346 was the Congressional designation of a landmark bill signed into law 64 years ago today - legislation designed to smooth the transition to civilian life for millions of World War II servicemen. In the process it changed America for ALL of us. Congress is very close to approving expanded benefits for service men and women of today's Iraq War era. Our Cover Story is reported now by Thalia Assuras.

They returned to a hero's welcome - sixteen million men and women who had served their country during World War II, one out of every nine Americans.

Yet, along with all the smiles and the tears of joy, there were fresh worries: Would returning vets be able to find jobs? A place to live? What was next?

"There was a near certainty that after the war - assuming the allies were victorious - that a depression would follow, just as happened after World War I - that the economy would tank," said author and Pulitzer Prize-winning journalist Ed Humes.

In his book "Over Here," Humes tracks the fate of those returning GIs.

"You had an economy that had been totally retooled to manufacture arms," he said of wartime America. "You had women entering the workforce in record numbers to take the jobs that the men had to leave to go fight. And so suddenly saying, 'Okay, back to normal,' it was gonna hit us like an explosion."

In a display of foresight not often seen in Washington, long before victory was assured, President Franklin Roosevelt put into motion a plan to ease vets back into the fragile economy.

As told in one period newsreel, "When a man gets out of the Army or Navy or Marines he's worried most about a job, an education and a home. And that's why Congress, led by the president, passed a law: The Serviceman's Readjustment Act of 1944, better known as the GI Bill of Rights."

Signed into law 64 years ago today, the bill promised every GI Joe and GI Jane the building blocks of what would become the American dream: low-cost loans to buy a home and, perhaps most important, a free college education.

It was largely the brainchild of the American Legion, a group representing veterans of previous wars.

Peter Gaytan is director of veteran's affairs for the American Legion. He says the bill's humble origins on a sheet of hotel stationery belie its radical premise:

"We didn't wanna just create legislation that would write a monthly check to a veteran who returned from combat. We recognized that they needed a transition into a life, not a payment for service. What the GI Bill originally did was allow them to go to school, to purchase their home, to become part of the work force when they took the uniform off."

Up to that time, America had a lousy track record when it came to taking care of its veterans. Even after the Revolutionary War, vets had to storm Independence Hall in Philadelphia to demand payment they'd been promised.

In 1932, in the depths of the Great Depression, World War I vets marched on the Capitol demanding compensation owed to them. Government troops were called in to disperse them by force.

It was a bleak chapter in American history - and the GI Bill was intended to make sure it would not be repeated.

Jerome Kohlberg, who enrolled in the Navy when he was 17, knew the value of the GI Bill: "I got three different degrees on it.

"I certainly had a lot of friends who never have gone to college and for whom the GI Bill was the difference in life and death, really."

Now 82, Kohlberg is a billionaire businessman, and he's giving away millions to help today's veterans pursue their educations - a way of paying back the investment the country once made in him.

The GI Bill's authors predicted a few hundred thousand vets would take advantage of its education benefits. Instead, nearly eight million did.

"It was phenomenal," Humes said. "There was also this feeling that these veterans, these ordinary, mostly blue-collar guys, aren't really college material. The president of the University of Chicago, [Robert] Hutchins, who was an innovative educator, he said, 'You know, this benefit is gonna turn our campuses into hobo jungles.'"

The veterans proved everyone wrong.

Famous actors, writers and even an astronaut reached new heights thanks to the GI Bill.

"Really, the cold warriors were educated on the GI Bill," Humes said. "They used different weapons. They had the drafting table instead of the draft board. They used their new skills to later on take us to the moon. GI Bill guys were behind that. Same with the Internet, with the invention of computers. You can trace back much of what's good in America today, to the skills and the prosperity that the GI Bill brought to this generation."

… which brings us to the present. GI Bill benefits are still available to returning veterans. But, while the cost of a college education has exploded in recent decades, government assistance has failed to keep pace.

For Todd Bowers it wasn't just a tough decision to just stop going to school: "It was embarrassing."

The 28-year old Marine reservist was almost killed by a sniper while serving in Iraq. The bullet is still lodged in his rifle scope.

Back home, Bowers re-enrolled for classes at George Washington University but had to drop out. Despite his savings and part-time jobs, his benefits simply didn't go far enough.

"I was as surprised as I think all of America is," Bowers said. "I hear from a lot of my friends who have not served and even family and they say, 'Well, you served in the military, your college is paid for.'"

For more than a year, Vietnam veteran and Democratic senator James Webb has been pushing for a new GI Bill comparable to the original. It would guarantee funding to cover a four-year state university tuition, plus living expenses. It also extends benefits to reservists and National Guard troops.

"When you look at today's military, even though people say this is a volunteer military, they forget that the majority of the people who go into the military get out on or before the end of their first enlistment," Webb said. "And they deserve the same opportunity to readjust into civilian life and a first-class shot at the future."

But the Pentagon was initially lukewarm about Senator Webb's proposal.

Cost wasn't the issue: The estimated price-tag for an expanded benefits program, $4 billion a year, is the equivalent of about one week of combat costs in Iraq and Afghanistan.

Still, until this past Thursday, the Bush administration and the Pentagon were balking because of concerns the new bill could encourage forces to leave the military.

"We in the department want to be careful that any changes to benefits don't undercut retention," said Undersecretary of Defense for manpower issues David Chu. "In other words, if you are very generous about post-service education, you're creating a draw away from continued military service, which we would need to counter-act."

But confronted with evidence that Senator Webb's proposal was gaining bipartisan support, on Thursday President Bush withdrew his opposition.

Hoping to encourage skilled forces to stay in the ranks, the compromise version of the bill will allow education funds to be transferred to military family members as well.

"We'll help you while you're in service," Chu said. "Here's our tuition assistance program. You can take this gift from the American public and you can give it to your spouse, your kids, whatever. I think it's a very powerful draw."

Humes believes the new GI Bill proposal is true to the spirit of the original legislation.

"The intent of the GI Bill, as it was written originally, was strictly to benefit the veterans, to help the servicemen readjust," he said. "It's about helping veterans take their place in society and become educated, become professionals. It's about investing in the future of America. That's what the GI Bill has always been about."