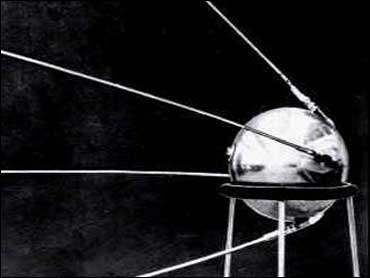 The year was 1957, the date was Oct. 4 and Americans everywhere were looking up. Something new was in the stars, something never before seen.

What they were seeing was Sputnik, a 22-inch, 184-pound, man-made satellite, which the Soviet Union launched into space.

A full-scale replica hangs today at the Smithsonian Air and Space Museum in Washington, where Von Hardesty works as a curator.

"When you think about the context of 1957, for the first time, something created by human beings had been thrust out of this well of gravity and put into orbit," Hardesty told Sunday Morning host Charles Osgood. "And to see that thing streak across the sky, it would just leave you in awe."

But awe was not the only thing Americans felt. With the Cold War in full swing, Russia had succeeded where the United States had only been making plans, and many Americans were appalled.

"We were caught off guard," Hardesty said. "And of course Eisenhower took a lot of the heat for that because although he tried to reassure the country, everything he said seemed to exude complacency, inertia and inactivity."

"Now as far as the satellite itself is concerned, that doesn't raise my apprehensions one iota, except as I pointed out it does definitely prove the possession by the Russian scientists of a very powerful threat," Eisenhower told the American people.

"There was such great uncertainty about the military implications of the launch," Hardesty said. "The '50s was filled with a lot of Cold War mentality and fears. Fear of the bomb."

"I can't think of a time where we were that afraid, even at Pearl Harbor, even at 9/11," he said. "This was a frightening time."

But what was frightening for adults was actually inspiring for many kids. The 1999 film "October Sky" depicts a generation obsessed with launching rockets.

"All over America, boys by the thousands wanted to help America win, beat the Russians," Hoffman said. "How were they going to do it? Launch rockets. And they built effectively pipe bombs with wings."

Back in the classroom, those same kids encountered a school system suddenly in flux, thanks to a growing paranoia that Soviet education was superior.

"When I was in college, I read a Life Magazine account and they made that contrast," Hoffman said. "They went to some high school in Chicago, I believe, and showed my generation out there - dancing and all the frivolity. And then the Soviet student is shown working at his desk on calculus at midnight, with a light bulb over his head. Our entire educational structure changed. There were programs in schools that didn't exist before. There was homework assignments by the hours a night. There were special classes for smart kids."

With science and space travel a new priority, the next American president was quick to make bold promises.

"I believe that this nation should commit itself to achieving the goals before this decade is out of landing a man on the moon and returning him safely to the Earth," President John F. Kennedy told the American people.

Daniel Schorr has a unique perspective on Sputnik. He watched events unfold from Moscow, where he was then reporting for CBS News.

"I very soon realized that it sent a profound shudder through the populace" he said. "The United States has never been caught napping that way again."

David Hoffman agrees. Though the age of Sputnik was dark and fearful, he says, its legacy is one of hope and possibility.

"It's really an impressive story of how we turned a negative into a positive," he said. "We won the space race. We built miniaturized objects that became cell phones and GPS systems. We built the Internet. And at the end of the day, there is no Soviet Union."