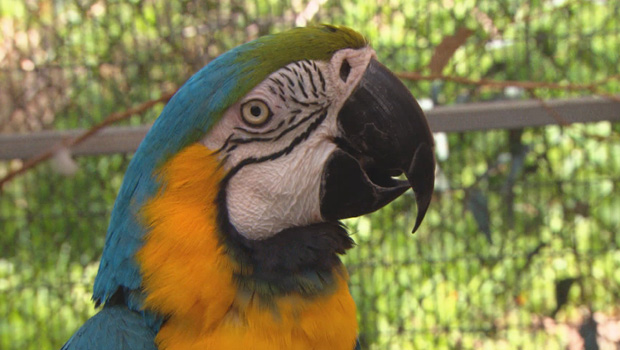 What could a parrot possibly have in common with veterans returning from combat overseas? Turns out they can be BIRDS OF A FEATHER . . . as Tracy Smith now shows us:

You can hear the place before you ever see it. In a lonely corner of Los Angeles is a home for dozens of parrots -- many of them neglected, abandoned, abused.

The people who care for these birds know something about trauma themselves: Most are veterans who still carry the emotional baggage of war. But in this tiny haven of wounded birds and troubled humans, there's a connection that's hard to miss.

Zoe is an African Gray, but to Flennikan, she's more than just a breakfast date. "If you'd-a told me five years ago that I'd be sitting in a cage like this petting a bird, I'd-a told you, 'You're outta your mind!' She adopted me three days after I got here."

"What is this relationship between the two of you?" Smith asked.

"I think she immediately saw something in me that I needed, you know?" Flennikan said. "I mean, she makes me feel like I'm important to her, you know? And I can't explain it because I don't know enough about parrots or birds or anything, but it's just a great feeling."

At Serenity Park, Zoe and three dozen other birds are part of an animal therapy program that pairs them with vets suffering from PTSD. The veterans say that, somehow, the parrots can connect with them in a way that no human therapist ever could.

Lilly Love is a former Coast Guard Rescue swimmer who lost nearly all of her buddies in a chopper crash. Since then, she battled depression and drug abuse, came out as transgender, and spent a lot of time in therapy. Nothing worked, until she started coming to Serenity Park, which she described as "coming back to home for me.

"I like these birds better than people, to tell you the truth," Love said.

"You joke about that, but you get along pretty well with people and that's because of the birds, you think, in part?" Smith asked.

"Definitely. They've taught me patience, they taught me trust. They taught me all about how you can be happy and playful even in the midst of pain."

"You still have the pain?"

Serenity Place was the idea of psychologist Lorin Lindner, who used to take veterans she was working with to another parrot sanctuary she ran north of L.A., and was surprised at how well parrots and vets got along.

"All of a sudden I'd see this transformation come over them," Lindner said. "They'd be holding the birds in their arms and calling them sweet terms, and I hadn't seen that in the group therapy I'd been doing with them."

So ten years ago, Lindner got the V.A. Medical Center to give her enough land to set up a few bird cages, and with a budget based solely on donations Serenity Park was born.

There's no hard scientific evidence to explain why parrots seem to help people suffering from PTSD, said Smith. The thinking is that the traumatized birds and the traumatized vets share a common bond that somehow seems to soothe their souls.

When asked to respond to people who might think a veterans-and-parrots connection "hippy-dippy," Lindner replied, "Do you have a dog? Dogs are domesticated to lie at our feet, but the parrots are not, yet they still want the relationship because they are a flock creature, and they imprint. They have those social neurons that immediately make them say 'You are who I want to follow for life.' And they're monogamous -- pretty rare these days!"

But that loyalty can be a double-edged sword. Parrots need near-constant attention. And some, when left alone, will scream for hours on end, or tear out their own feathers in desperation.

Harvard University researcher Irene Pepperberg says few people are prepared for a parrot in their lives.

"Imagine taking a five-year-old child, putting it in a playpen with a few toys and a few snacks for ten hours a day," she said. "Doesn't work that way."

What's more, a parrot can be a lifetime commitment.

"Because they live forever -- I won't say forever, but 40, 50 years is very common," said Pepperberg.

As a result, parrots can outlive their original owners. And those that do are often abused or discarded.

Most of the Serenity Park birds went through hell at some point in their lives, just like the people who now care for them.

"There is an unspoken communication between one sentient being that has suffered trauma and another," said Serenity Park operations manager Matt Simmons. "And you feel that."

Simmons is a former Navy man whose job it was to keep track of bomb damage and body counts.

Parrots like Phoebe are helping him live with the memories.

"If you go to a shelter and you say, 'Ooh, I love that dog. That dog's gonna go home with me,' that dog is more than likely going to accept that relationship," Simmons said. "But with a parrot who can fly, lives in a huge aviary, has no other reason to be with you other than self-selection -- when they select you -- it's unique. It's special. And that's something that a lot of our veterans and myself coming home didn't feel."

Who'd have ever thought that the most beautiful thing about a parrot is its heart?