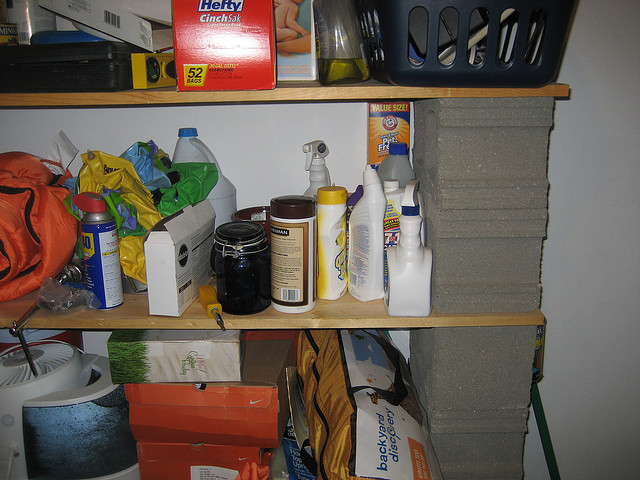 (MoneyWatch) One of the most fascinating books to come out this summer is a photograph-heavy academic tome called "Life at Home in the Twenty-First Century." Produced by researchers at UCLA's Center on Everyday Lives of Families (CELF), the book documents the results of an anthropological study of 32 middle-class dual-income Los Angeles households with children.

The takeaway? American families have a lot of stuff. The pictures in this book -- of rooms almost ridiculously packed -- are worth a thousand words, but the words and numbers say a lot, too. Three-fourths of the families studied had stopped using their garages to park their cars. They had too much stuff crammed in every nook to drive in, and so had to consign their cars to the street or the driveway. They had enough food to survive all manner of natural disasters; 47 percent had second fridges. The families' primary kitchen fridges were decorated with a mean of 52 objects: coupons, photos, magnets.

The families gained 30 percent more possessions with the arrival of each child, with one family owning 165 Beanie Babies. The families owned an average of 212 CDs and 90 DVDs or VHS tapes (The study started in 2001.) These 32 families owned 99 TVs. A few of the families had more TVs than people.

The CELF researchers asked families to narrate tours of their homes; many of the mothers in particular described the stress of too much clutter. They'd spent lots of time and money buying objects, and over time the stuff simply stacked up, almost crowding these families out of their modest homes.

These people aren't on a reality show about hoarding. They're normal families. We overbuy all kinds of things in our consumer culture -- billions of items of clothes per year when most of us have overstuffed closets already. Too much stuff becomes visually bothersome in a house, but it also costs time in these four categories:

2. Time spent hunting for something to wear. Too many clothes make morning choices overwhelming.

3. Time spent hunting for lost items. When you need scissors, tape, or a thermometer, cluttered drawers can render them invisible.

4. Time spent working to pay for food and other items that go bad. Freezer burn, spoilage, and broken items mean money thrown in the trash.

How to claw that time back? Own less stuff. Getting rid of stuff take time, so it's best not to acquire it in the first place. One of the good things about being really busy with kids and work is there's no time to shop. When I found myself in the mall for the first time in about a year the other day, I felt like an anthropologist visiting a foreign culture. Do people really buy T-shirts that fall apart after two washes? Apparently so. But just remember that too much stuff means throwing away time as well as money. And while you can make more money, no one can make more time.

How do you keep stuff from accumulating in your house?