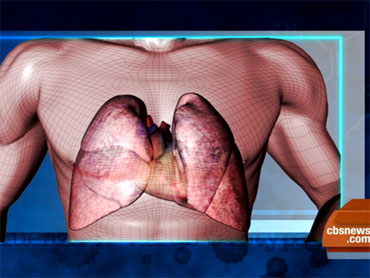 Federal officials said a vaccine to help prevent the new flu is expected to be ready by mid to late October. But still some people are wondering how you can actually die from the H1N1 virus.

CBS News medical correspondent Dr. Jennifer Ashton sat down with Early Show co-anchor Harry Smith and took a closer look at what happens to the body.

Germs are everywhere - in our homes, offices, and schools. While some are harmless, others can be deadly, like the H1N1 virus or swine flu.

It spreads when a carrier coughs or sneezes; another person touches the object or surface with the flu virus on it and then touches his own nose or mouth.

Without air entering the lungs, the amount of oxygen in the blood drops. If diagnosed early, some patients will get extra oxygen supplied by a breathing machine; others may fall into a coma. Patients die from H1N1 because their lungs give out via lack of oxygen or drowned by fluids.

At this time, 50 percent of H1N1 deaths are due to viral pneumonia and half the fatalities have been in people with pre-existing medical conditions like obesity, diabetes, and pregnancy.

An animation was shown that demonstrated the affects of ARDS (acute respiratory distress syndrome).

"Is that flu or is that pneumonia?" Smith asked after viewing the animation.

"Well, what that described is a situation we referred to as ARDS where the lungs literally become like sponges and can't exchange oxygen. That can happen with the viral pneumonia, a bacterial pneumonia, but half of the deaths due to H1N1 have been due to this viral pneumonia leading to that kind of pulmonary failure," Ashton explained.

Last week, the Centers for Disease Control and Prevention (CDC) reported to Ashton that it has studied the autopsy results of the people who have succumbed to the H1N1 virus, and found that about half of the cases are in people who were either obese, had diabetes, or were pregnant and suppressed their immune system.

According to Ashton, there's a "variable time course," where sometimes it happens over hours, days, or weeks. But Ashton stressed that once ARDS sets into the lungs and the patient is put on a ventilator, multiple organ systems then begin to fail and the mortality rate can be as high as 30 percent to 50 percent.