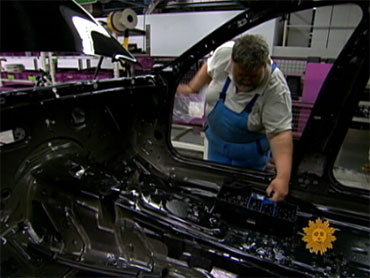 BMW's work force is getting older. But as Richard Roth reports, it's also maybe getting better.

In a world where the route's always scenic and the road's always open, automaker BMW was worried it could be losing a race against time.

That's catching up with the 18,000 workers who build the brand's luxury cars in Dingolfing, Germany.

Production manager Helmut Mauermann was crunching the numbers, and found that BMW's workers are getting older.

"No surprise," Mauermann said. "It's part of the demographic development of the German country as a whole, or even Europe as a whole."

Demographers call it the "Silver Tsunami": a rising tide of grey hair.

Older workers have more patience and skill that comes from experience, the studies say, but less flexibility, strength and vision - real liabilities on a production line that depends on precision engineering and a lot of hard work to turn out more than 1,200 cars a day.

BMW could force its aging workers to retire, or even fire them. But Mauermann said that's not the solution.

"That might be the simple way to solve the problem, but we have a social contract within Germany, or at the BMW group, where we say, that's not the solution we will look for - especially since we don't have enough younger people to replace [them with], so it wouldn't work even if we wanted to," he said.

In what the Harvard Business Review called "an experiment defusing its demographic time bomb," BMW decided to look ahead.

Management have tinkered with one assembly line in one division of a huge auto plant, and turned it older overnight. They staffed it so that the average age of workers would be 47 - exactly what it's projected to be seven years from now.

They then asked the workers how to make things better.

When workers said their feet hurt, the company made them special shoes, and put in wooden floors. Some got a place to sit: a hairdresser's chair, modified for the assembly line.

Rudolph Mohr, 56, has been working here for 35 years. He finally got a chance to stretch - right on the factory floor. "When I go home, I have more energy," Mohr said.

Some tools were improved, and new computer screens were introduced, with bigger type.

In all, the company says it made 70 small changes in the workplace, to cut the chance of errors and reduce physical strain.

BMW says the project only cost about $50,000, including lost time.

"All these changes are extremely obvious, but you won't come to these ideas sitting somewhere in an office and then thinking, 'How can I change the working place of a worker who is half a mile away?'" Mauermann said.

And this assembly line's defect rate dropped to zero.

"It's so simple, but it seems to work," Mauermann said.

Not all of auto manufacturing can be re-engineered for an older workforce. But BMW says enough can that it's testing and refining the experiment in other plants, including in the U.S.

Except managers no longer call it a project to aid the elderly; it's simply BMW's fresh new plan to improve productivity.