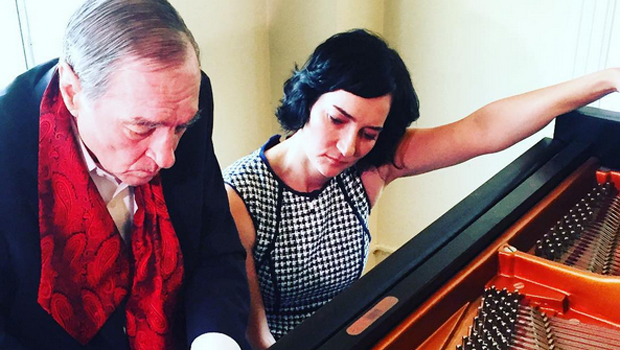 A father's eye for a colorful photograph ... and his ear for music ... are the threads that tie him to his daughter with an eye and a talent of her own. Anthony Mason has paid both of them a visit:

William Eggleston is one of the giants of color photography -- among the most influential artists of his time.

"My entire life I have been approached at his openings: 'Well, what's it like to be the daughter of William Eggleston?'" said Andra Eggleston. "I wanted to turn around to people and say, 'What was it like? Do you want to trade places with me? Please!' I spent my entire life just wanting to be normal!"

Eggleston's subjects can seem hauntingly ordinary. Most people "want something obvious," the renowned photographer has said. "I am at war with the obvious."

Even for his daughter Andra, Eggleston's images have not been easy to decipher. "What does this man see? What are these photographs?" she said.

But his music has always reached her:

"When I was little, and he was a total stranger to me, and a total enigma, I would hear him playing the piano and it would just stop me in my tracks," she recalled. "Like it was just like my song."

His drawings have touched her, too -- colorful abstract sketches Eggleston has been making for decades. He's filled countless notebooks.

When asked how many drawings he'd done, Eggleston suggested, "Thousands." He didn't know where they end up.

"We find them in very strange places," Andra said.

Two years ago, Andra, who studied textile design, suddenly had an inspiration: to turn her father's drawings into fabrics. He loved the idea.

That new partnership between the 76-year-old artist and his 44-year-old daughter has changed the fabric of their relationship.

Andra said, "The drawings were like our language, where we could communicate. I had never had that with him in his photography. I just didn't."

In the 1960s, Eggleston ignored the prevailing wisdom that color photography was commercial, even vulgar. "Fine art photography didn't exist in color," he said.

"Why did you want to see more in color?"

"Everything is in color out there!"

Raised on the family farm in Tallahatchie County, Mississippi, Eggleston shot pictures across the American South. 'They focus on the mundane world," Eudora Welty would write, "but no subject is fuller of implications."

People have described Eggleston's photographs as something "slightly unsettling."

"They should," he said. "That's not a conscious thing with me."

"Why do you think it's there?"

In 1976, Eggleston had his first major one-man show, at the Museum of Modern Art in New York. He was late to his own opening.

Critics at the time were unmoved. The New York Times called the Eggleston exhibition "perfectly boring."

Mason said, "People would have been pretty devastated by the initial response to your work."

"No. I just couldn't understand why they didn't make sense to them."

Eggleston's life has been as unconventional as his art. He cut a dashing figure in Memphis: "Like a count" a friend once said, "dashing and corrupt."

While he was close to his wife Rosa, he also lived with other women: Growing up, Andra said, she was confused by their parents' living arrangements.

She remembers one night a brick flew through the window at home: "I have a mom. My dad has a girlfriend. They're still married. But the ex-girlfriend threw a brick threw the window. And all I was thinking is, 'God, this is gonna end up in the papers.' 'Cause everything my dad did at that time, for some reason, ended up in the papers."

In Nashville, where she lives with her husband and son, Andra Eggleston launched her new fabrics last year at the Wilder Design Store.

Her line, called Electra Eggleston, has been written up in W magazine. The French fashion house Agnes b. is making dresses out of her fabrics.

It's all deepened her relationship with her father. "He started looking at things in a different way," she said. "And I never thought I would get William Eggleston to look at something in a different way! Me?"

Mason asked, "Do you think he got a clearer path to you as well?"

"I do, I do. He's said a lot of things to me recently that I never heard him say before."

"Isn't she somethin'?" her dad enthused.

"He is just very silent. He's been supportive in his own way; he's just never been so vocal."

"And what do you do with that except take it?"

"Total and utter appreciation for what's happening. It's been very healing for me. It's helped me love him more."

"Does it matter that it took so long?"

At the end of our day together, after a few bourbons, Bill Eggleston sat at the piano in his Memphis apartment, and for half an hour just improvised.

"And I just close my eyes and hear that music -- it just still pierces me," Andra said. "'Cause it just ... it just sounds pure."

Always this father's most powerful connection to his daughter, but no longer the only one.