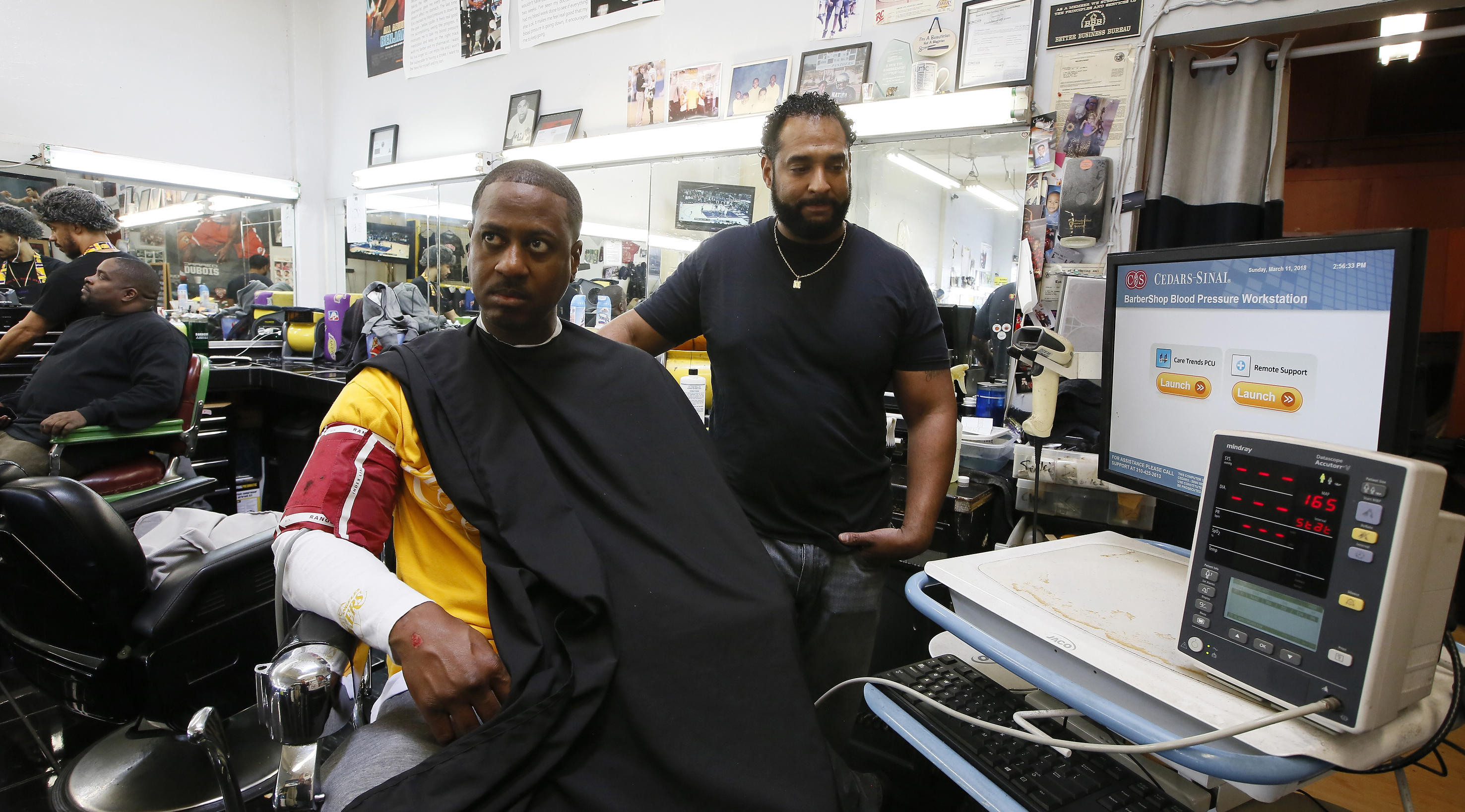 ORLANDO, Fla. -- Trim your hair, your beard, your blood pressure? Black men reduced one of their biggest medical risks through a novel project that shows the power of familiar faces and trusted places to improve health.

The project had pharmacists work with dozens of Los Angeles barbershops to test and treat clients. The results, reported Monday at a cardiology conference, have doctors planning to expand the project to more cities nationwide.

"There's open communication in a barbershop. There's a relationship, a trust," said Eric Muhammad, owner of A New You Barbershop, one of the barbers who participated. "We have a lot more influence than just the doctor walking in the door."

Black men have high rates of high blood pressure -- a top reading over 130 or a bottom one over 80 -- and the problems it can cause, such as stroke and heart attacks. Only half of Americans with high pressure have it under control; many don't even know they have the condition.

Churches, beauty salons and other community spots have been used to reach groups that often lack access to doctors, to promote cancer screenings and other services.

"Barbershops are a uniquely popular meeting place for African-American men," Victor noted, and many have gone every other week to the same barber for many years, he said. "It almost has a social club feel to it, a delightful, friendly environment" that makes it ideal for improving health.

Victor did a study in 17 Dallas barbershops a few years ago. In that one, barbers tested patrons and referred them to doctors. Improvements were modest.

In the new study, "we added a pharmacist into the mix" so medicines could be prescribed on the spot, he said.

The new work involved 303 men and 52 barbershops. One group of customers just got pamphlets and blood pressure tips while they were getting haircuts. Another group met with pharmacists in the barbershops and could get treatment if their blood pressure was high.

At the start of the study, their top pressure number averaged 154. After six months, it fell by 9 points for customers just given advice and by 27 points for those who saw pharmacists.

Nearly two-thirds of the men who saw pharmacists lowered their pressure to under 130 over 80 -- the threshold for high blood pressure under new guidelines adopted last fall. Only 12 percent of the men who just got advice dropped to that level.

"This is a home run ... high-touch medicine," said one independent expert, Eileen Handberg, a heart researcher at the University of Florida in Gainesville. Most drug trials only dream about such good results, yet they were achieved in a regular community setting, she said.

"If we could just save one life I think it's a win," Muhammad said.

Nineteen of Muhammad's customers finished the program, and "all their blood pressures were down, every single one of them," he said.

"It woke me up," said Sims, who has a young son. "All I could think about was me having a stroke and not being here for him. It was time to get my health right."

Medicines lowered his pressure to 125 over 95.

Treatment doesn't always mean medicines; healthier lifestyles can do a lot. Poor diets, lack of exercise and other bad habits cause most high blood pressure. Making some lifestyle changes helped Sims, too.

The National Institutes of Health paid for the study. Results were discussed at an American College of Cardiology conference in Orlando and published by the New England Journal of Medicine.

The cost of doing this isn't really known. Victor now aims to do a study of 3,000 men in many cities around the country that will include a look at that. He also hopes to tackle high cholesterol with a similar approach.

The results show that "you don't need cardiologists" to improve things, said Dr. Willie Lawrence, an American Heart Association spokesman and blood pressure specialist in Kansas City, Missouri. "We can partner with others in the community and get this epidemic under control."