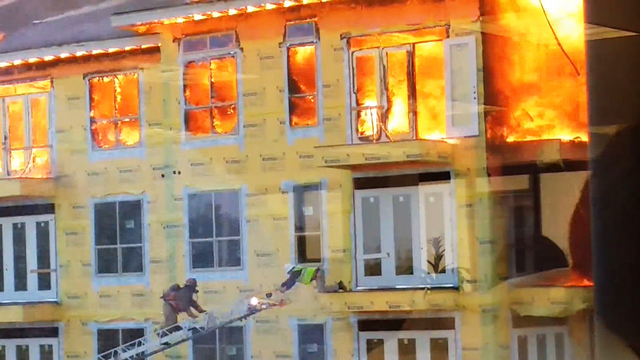 HOUSTON -- Dramatic video shows a worker being rescued from a burning under-construction Houston apartment complex after flinging himself from a fifth-floor ledge to a lower floor.

Some bystanders Tuesday afternoon videotaped the scene as the roaring fire consumed a planned $50 million luxury complex. Investigators are trying to determine whether the fire was started during welding.

The worker is seen standing on the floor of an incomplete patio. He waves for help as flames draw closer, then dangles his legs over the edge, swings and drops to a fourth-floor ledge.

A firefighter on an extension ladder reaches the worker. The worker reaches and crawls to the ladder just moments before a burning section of upper wall collapses next to them.

The ladder then draws the worker and the firefighter to safety.