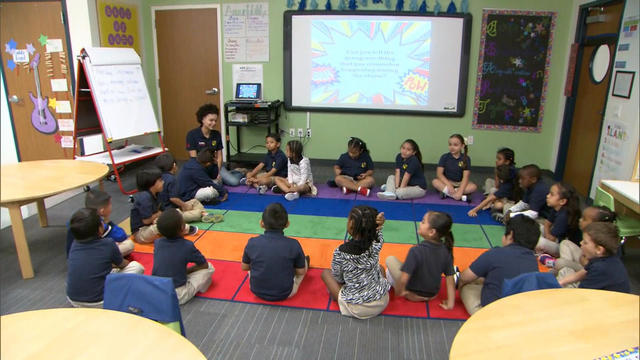 Most Houston schools are open again Tuesday after Hurricane Harvey. Before the storm hit the city, schools were converted to shelters and drop-off sites for donations. Now, more than 215,000 students are filling the classrooms.

First-year teacher Destiny Riley offered hugs to each of her returning students last week at Houston's KIPP SHARP Prep – just the thing for a group of first graders looking for a fresh start to their school year, reports CBS News' Omar Villafranca.

"It's paramount. Kids really grow with routine. So having school, you know, I have to be here at 7:30, I have to have my uniform on. I have to be ready to go. It's huge for them now. It gives them something to latch onto," Riley said.

The first day back to Ms. Riley's class included time for students to share experiences from the storm.

"When we sit in a circle and we put all of our energy in the middle of it, they really grow from that. When they're around their peers, they definitely open up because they feel more comfortable," Riley said.

"We want to make sure we're really meeting the needs of our kids," said Michelle Bennett, the principal at KIPP SHARP.

"Do they kind of help you put things in perspective even after something as horrible as this?" Villafranca asked.

"They do," Bennett said. "Relationships matter. People matter. And being there for one another is really important. When we go through these types of disasters, tragedies, we really know when we're here for one another and that's what Houston public schools is all about."

Going back to school, she says, will be a welcome relief for her and her students.

The tireless efforts of school employees made it possible to reopen Houston area schools two weeks after Hurricane Harvey hit, but most agree it's the students who are bringing these communities back to normal.

"I'll be honest. I was very surprised at how well they've handled this. I mean, I, as a 30-year-old woman, was very upset about this, but my six-year-olds are doing very well," Riley said.