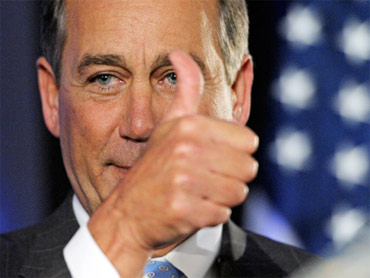 House Republicans today adopted a ban on earmarks in the 112th Congress, continuing the earmarks ban they already have in place.

"This earmark ban shows the American people we are listening and we are dead serious about ending business as usual in Washington," House Republican Leader John Boehner said in a statement.

Senate Republicans - driven by Tea Party-backed lawmakers - adopted an earmarks ban on Tuesday, despite concerns from Republican leader Mitch McConnelland some other Republicans that in doing so they are ceding spending authority to the executive branch.

Earmarks account for less than one half of one percent of the federal budget, and their elimination would have a relatively insignificant effect on the budget deficit. (They still generally make up about $15 billion of the budget each year.) But they have become a symbol for many Americans of wasteful government spending, and Republicans are eager to show their supporters they are serious about fiscal discipline.

In March of this year, House Republicans adopted a year-long earmarks ban, but that did not stop three members from requesting earmarks anyway. House Democrats last year adopted a moratorium on earmarks directed to for-profit companies.

Senate Majority Leader Harry Reid has said he will allow a vote on an earmarks ban by the full Senate. Only two Democrats have come out in favor of such a ban.

Earmarks are requests by individual lawmakers for funds to be directed to their districts for projects or companies. Earmarking allows lawmakers to get around the bidding process that goes through the executive branch.

President Obama has said in the past that he opposes wasteful earmark spending but that he believes some earmarks can be useful; he put out a statement earlier this week that did not make his position on the issue entirely clear. Pressed for clarification by CBS News, White House Press Secretary Robert Gibbs said Tuesday that the president supports a permanent ban on all congressional earmarks.

In his statement on the House GOP's earmarks ban, Boehner said, "We hope President Obama will follow through on his support for an earmark ban by pressing Democratic leaders to join House and Senate Republicans in taking this critical step to restore public trust."

Some argue an earmarks ban could hamper partisan cooperation because they can be used as tools to win votes.

"If earmarks are used to generate compromise, than you're taking away another tool for lawmakers to use to prevent gridlock," George Mason University economics professor Thomas Stratmann said. "Someone has to give, and to the extent that earmarks grease the wheel, they are beneficial."