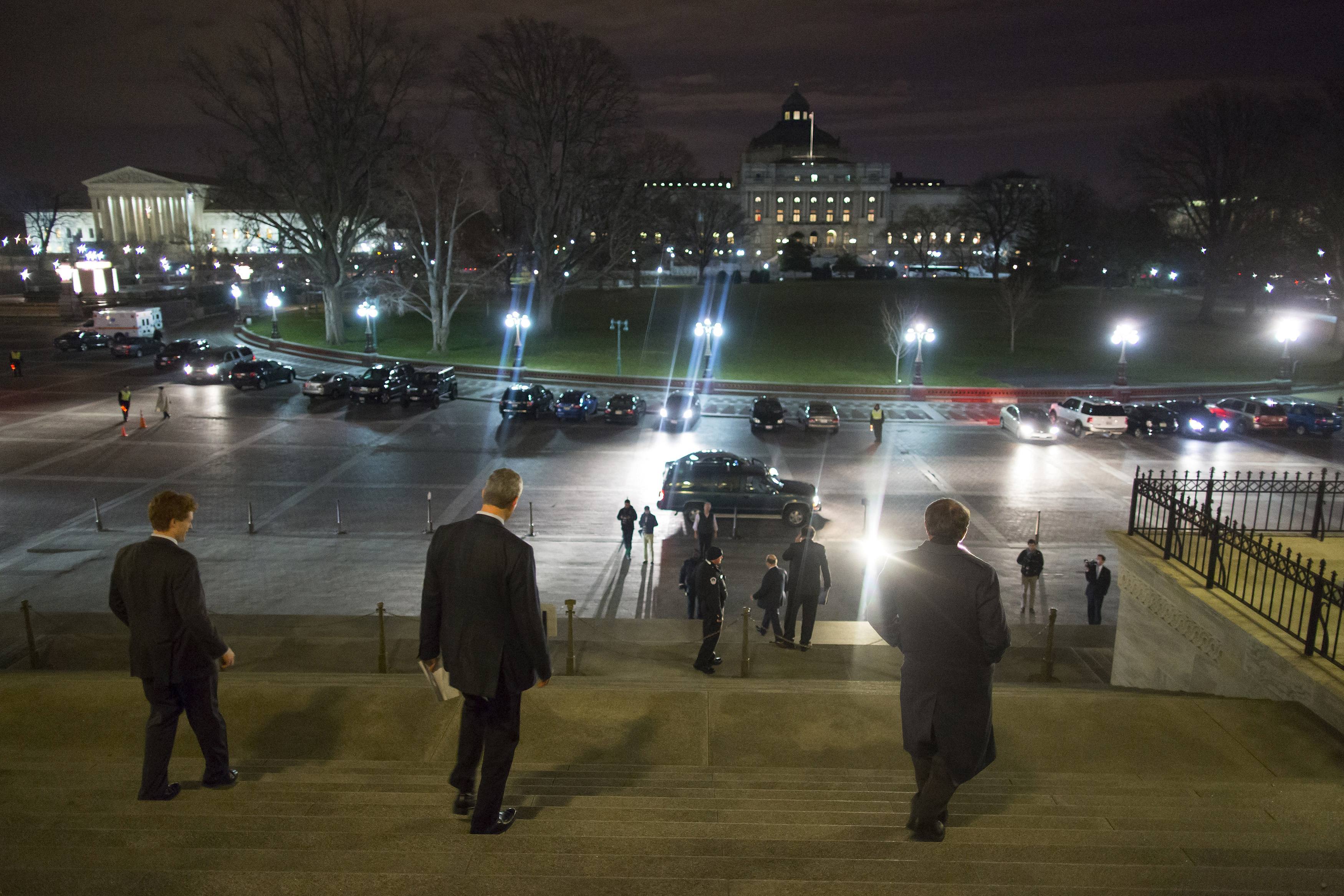 The House narrowly passed the $1.1 trillion spending bill meant to keep the government funded for the next year after a dramatic daylong showdown in which the legislation's opponents were just one vote away from derailing the measure.

Lawmakers in both the House and Senate also passed a shorter, two-day spending bill to give the Senate enough time to take up the larger funding measure.

The first sign of trouble came at midday Thursday, when the legislation just barely collected enough votes to clear a procedural hurdle. Many Republicans objected to the fact that the bill did not immediately deny funding to the Department of Homeland Security (DHS), which will carry out President Obama's program to defer deportation for about 4 million immigrants living in the country illegally (the bill funds DHS through February, giving the House and Senate another crack at denying the president funding when Republicans take control of the upper chamber).

Democrats - who didn't provide a "yes" vote - had two main objections: the elimination of a requirement from the Dodd-Frank financial regulatory reforms passed in 2010 that banks separate their trades of financial derivatives, which played a key role in the 2008 financial collapse, from traditional bank accounts, which are backed by the federal government. Furthermore, they objected to language that would increase the limit on individual donations to national party committees tenfold, from $32,400 to $324,000.

The bill might have failed to get by the procedural roadblock at all, had retiring Rep. Kerry Bentivolio, R-Michigan, not switched his vote from a "no" to a "yes." Bentivolio's former career as a reindeer rancher and Santa Clause actor prompted many to joke that Santa stepped in at the last minute to save Christmas for Congress.

But the drama didn't end there. With a government shutdown looming - government funding expires at midnight Thursday evening - the White House stepped in to give Democrats some cover to vote in favor of the bill. The administration released a statement noting that it opposed the financial and campaign finance reforms, as well as the short-term DHS funding - but that ultimately, it supported passage of the bill, and encouraged Congress to pass it.

That infuriated House Minority Leader Nancy Pelosi, D-California, who took to the House floor to say that everyone in the House was being "blackmailed" to support bad legislation and that she would not support it.

"This is a ransom. This is blackmail," Pelosi said. "I'm enormously disappointed that the White House feels that the only way they can get a bill is to go along with this and that would be the only reason they would sign such a bill that would weaken a critical component of financial system reform aimed at reducing taxpayer risk."

Democrats huddled behind closed doors in the late afternoon to discuss how to proceed. A source in the meeting told CBS News Congressional Correspondent Nancy Cordes that Pelosi told members, "I'm giving you the leverage to do whatever you have to do. We have enough votes to show them never to do this again." She did not urge members to vote either way.

On the House floor shortly before the vote, House Minority Whip Steny Hoyer, D-Maryland, voiced his support for the bill while noting his objections to the financial and campaign spending provisions, as well as the short-term funding for DHS.

"In a world of alternatives I have concluded that it is better for us to pass this cromnibus as it is," he said, using the nickname for the bill that combines its two components, an omnibus spending bill and a continuing resolution.

CBS News Chief White House Correspondent Major Garrett reported President Obama and his cabinet secretaries spent the remainder of the afternoon calling individual members of the House Democratic caucus to urge their support. Ultimately, the White House won out since 57 Democrats decided to join their Republican counterparts, and the bill passed. Another 139, however, voted against the bill.

But with enough fires extinguished on the House side, there may be even more to put out in order to clear a path in the Democrat-controlled Senate.

In the upper chamber, Sen. Elizabeth Warren, D-Massachusetts, was busy firing up her progressive colleagues against the bill - and to ask for some Republican support.

"I'm here today to ask my Republican colleagues, who don't want to see another Wall Street bailout, to join in our efforts to strip this Wall Street giveaway from the bill. This is not about partisanship. This is about fairness. This is about accountability and responsibility. This is about preventing another financial collapse that could again wipe out millions of jobs and take down our whole economy," Warren said.

"If you believe in smaller government, how can you support a provision that could expand a government insurance program and put taxpayers on the hook for the riskiest private activities?" she asked.

After the House voted Thursday night, Senate Majority Leader Harry Reid, D-Nevada, wrote in a tweet that the Senate will debate the bill on Friday and vote on it "as soon as possible."

Unlike Pelosi, however, he indicated he would ultimately support the bill.

"I'm upset with certain things in the bill. Its' [sic] not perfect. But a longer-term funding is much better for our economy than a short-term one," Reid wrote in another tweet.

The Senate passed the two-day spending bill Thursday night by voice vote, giving them time to bring up the bigger measure Friday. If every senator agrees to speed up the voting process, a process called unanimous consent, they could vote on the bill Friday. If even one senator objects, they will have to wait until Monday to vote.