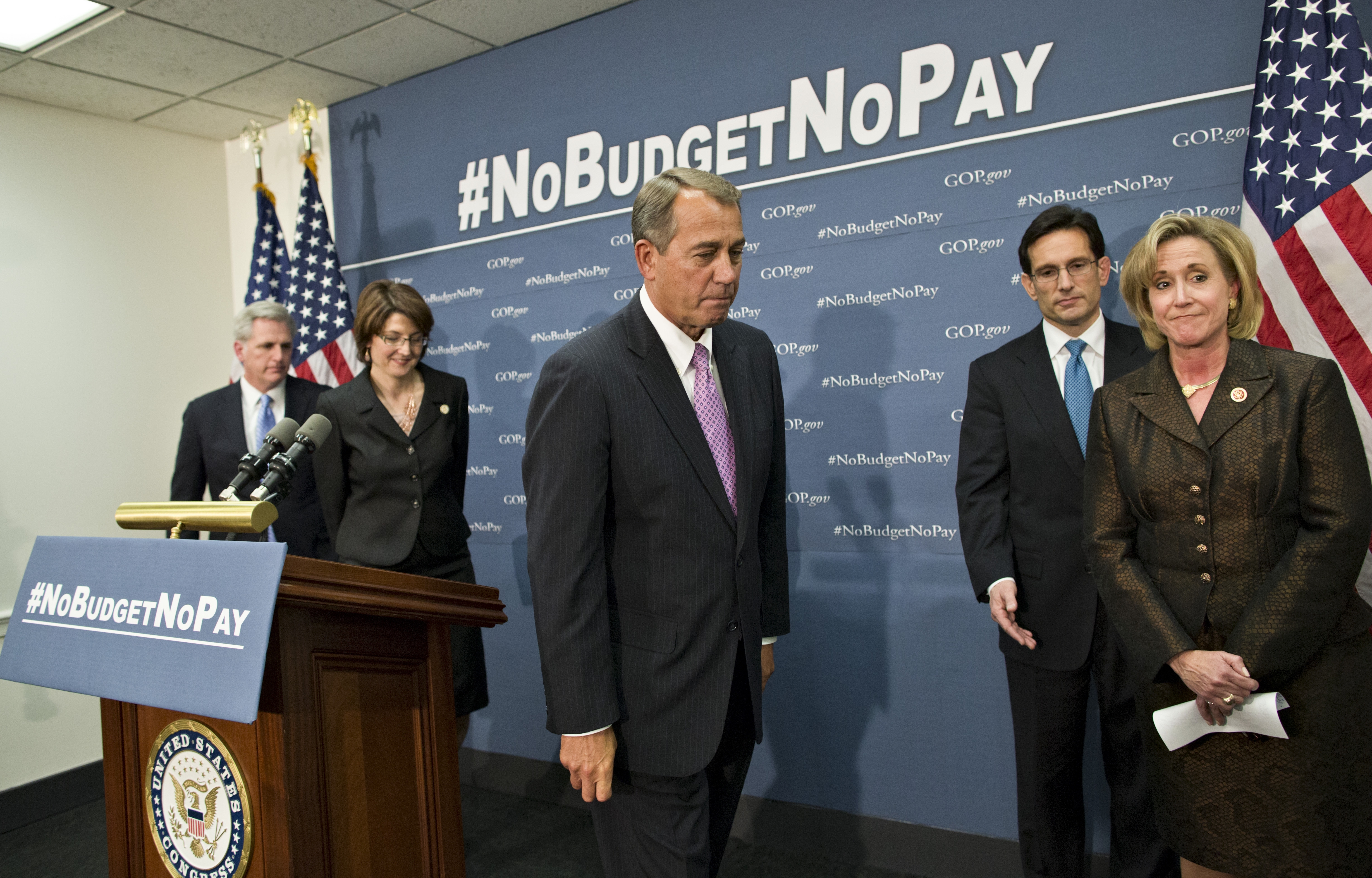 The Republican-led House today passed a bill to "suspend" the nation's debt limit until May, which if passed by the Senate and signed into law, would stave off for a few months the risk of letting the U.S. government default on its loans.

The GOP-crafted legislation also requires both chambers of Congress to either pass a budget or have their salary withheld -- a move that Republicans say puts the nation on a path toward fiscal responsibility and positions them better for the looming fiscal fights. House Democrats, meanwhile, grumbled that the short-term bill amounts to political gimmickry that keeps Washington in crisis mode. Still, some Democrats argued the GOP bill reveals that Republicans are at a disadvantage in the debate over the debt limit.

"The premise here is pretty simple," House Speaker John Boehner said on the House floor. "It says there should be no long-term increase in the debt limit until there's a long term plan to deal with the fiscal crisis that faces our country. Every hardworking taxpayer in America knows that they have to do a budget. Every hardworking taxpayer understands that you can't continue to spend money that you don't have."

Senate Democrats said they will pass the bill as it stands because they were planning to draft a budget anyway, adding that the bill sets the precedent of taking the debt ceiling out of negotiations over government spending.

"Gambling with default was never a sound plan for Republicans," Sen. Chuck Schumer, D-N.Y., said today. "The president stared down Republicans, [and] they blinked because they realized they didn't have the leverage they thought they would."

The U.S. Treasury has already hit its $16.4 trillion borrowing limit, but the department has been able to extend its borrowing authority through various accounting tricks. However, Treasury Secretary Timothy Geithner has informed Congress that the department should exhaust that authority by mid-February or March. If Congress fails to raise the limit by then, the government risks defaulting on its loans, which could have catastrophic economic consequences.

The White House has said that while the "No budget, no pay" bill is far from ideal, President Obama will sign it into law should both chambers pass it, in order to lift the immediate threat of default.

Initially, Republicans wanted dollar-for-dollar spending cuts to match the debt limit increase. President Obama has said he's willing to discuss more spending cuts in separate talks, but that he will not negotiate over raising the debt limit. So, at a House Republican retreat earlier this month, the GOP crafted this plan to avoid the ugly fight over the debt limit that Congress waged in the summer of 2011, to the detriment of the economy and Congress' approval ratings.

By "suspending" the debt limit until May 19, some conservatives have made the case that Republicans have put themselves in a better position for upcoming fiscal fights -- they'll be able to demand spending cuts during debates over the so-called "sequester" and the federal budget (both of which must be addressed by March) while the threat of default hangs on the horizon.

"We know with certainty that a debt crisis is coming to America," he said. "This is not a question of if, it is a question of when."

Democrats like Rep. Jim McGovern, D-Mass., said the "No budget, no pay" bill amounted to a "gimmick," for various reasons. For one thing, while it requires both the House and the Senate to pass their own budgets, it doesn't demand that those budgets be passed into law.

"I have no doubt [Republicans] have the votes to ram whatever [budget] they want through the House of Representatives," McGovern said on the House floor. "This is not a solution, what this is is more political gamesmanship... You pass something in the House, it may never be reconcilable with the Senate."

House Democrats also complained that the bill prolonged the debate over the debt limit rather than solving it.