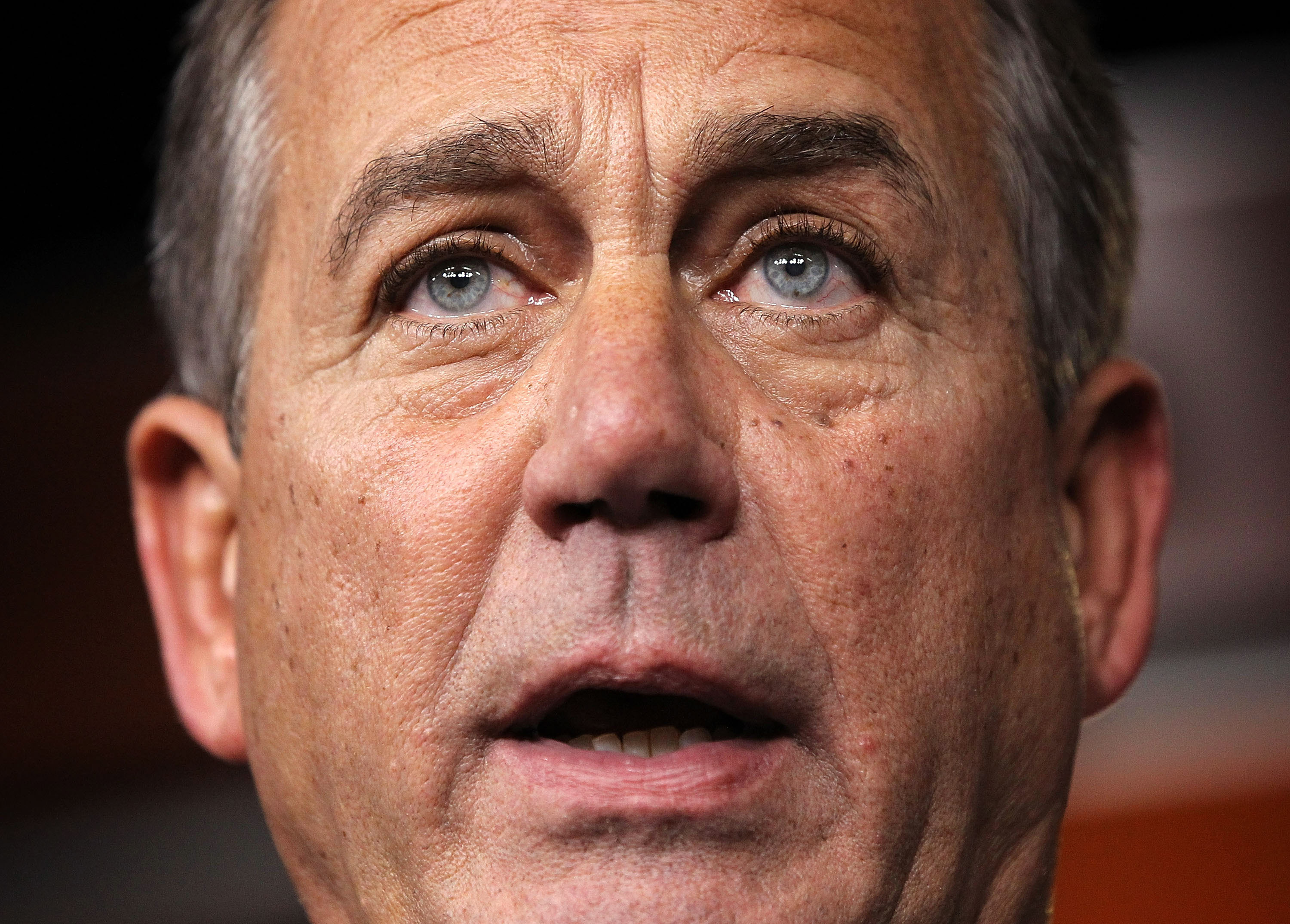 House Speaker John Boehner, R-Ohio, pulled the Republican package known as "Plan B" tonight that was meant to show Republicans were acting to prevent a tax cut for the majority of Americans while allowing rates to go up on millionaires.

"The House did not take up the tax measure today because it did not have sufficient support from our members to pass. Now it is up to the president to work with Senator Reid on legislation to avert the fiscal cliff," Boehner said in a written statement. "The House has already passed legislation to stop all of the January 1 tax rate increases and replace the sequester with responsible spending cuts that will begin to address our nation's crippling debt. The Senate must now act."

In a hastily called meeting of House Republicans, Boehner first led members in the "Serenity Prayer" asking God to "accept the things I cannot change; courage to change the things I can; and wisdom to know the difference."

Members in the room said he then announced to the House Republican Conference that there weren't enough votes to pass the tax plan. Boehner told them that he would still be open to working with President Obama on a deal or the president could work with Senate Democrats on a package, but that the House would go home tonight for the holidays and return after Christmas if there is a deal, but maybe not at all.

White House spokesman Jay Carney said in a statement tonight: "The President's main priority is to ensure that taxes don't go up on 98 percent of Americans and 97 percent of small businesses in just a few short days. The President will work with Congress to get this done and we are hopeful that we will be able to find a bipartisan solution quickly that protects the middle class and our economy."

GOP leaders hoped that they could pass "Plan B" and send it to the Senate for Democrats there to either change and send back to the House or to serve as a vehicle for a final deal to avoid the "fiscal cliff". Mostly, it was meant to show that Republicans were acting to prevent the tax increase while Senate Democrats were not.

Majority Leader Eric Cantor even predicted the package would pass. He said "we're going to have the votes to pass both the permanent tax relief bill as well as the spending reduction package."

But Senate Majority Leader Harry Reid, D-Nev., made it clear that the Republican bill would go nowhere in the Senate.

"We are not taking up any of the things that they're working on over there now" Reid told reporters. "It's time for Republicans to get serious. It's very, very, very unfortunate the Republicans have wasted an entire week on a number of pointless political stunts and that's what they've been."

In the end, conservative House Republicans balked at the idea of voting on a bill that would increase taxes on anyone if it wouldn't go anywhere. The Club for Growth and other conservative groups warned that they would consider this vote a vote for a tax increase, something they would consider when deciding whether to endorse candidates or possible primary opponents.

Rep. John Fleming, R-La.,opposed "Plan B" and said members felt "fatigue" and "frustration". "We just feel like we're not getting a willing partner in President Obama. So we're a little crestfallen we can't get cooperation from President Obama."

Retiring Rep. Steve Latourette, R-Ohio, said that Boehner seemed sad while he announced the plan.  He added it's the same 40 "chuckleheads" that have held up agreements over the past two years.

The revelation that Boehner couldn't muster enough support for "Plan B" virtually confirms what Obama officials told CBS News earlier today: he's short on GOP support for the "fiscal cliff" offer he presented to the president last weekend. The two sides are not that far apart in the "fiscal cliff" negotiations: In their most recent offers, Mr. Obama was offering $1.2 trillion in revenue and $800 billion in spending cuts; Boehner was offering $1 trillion in revenue and $1 trillion in spending cuts.

There were several warning signs of the lack of enthusiasm among House Republicans: Boehner was seen on the House floor Wednesday glad-handling in an effort to win votes, and the decision to hold the vote late in the evening tonight appeared to have been made to ensure there was adequate time to ensure that the bill would pass. Erick Erickson of the conservative RedState blog reported Thursday morning that 34 Republicans planned to vote against the bill and 12 more were considering doing so, more than enough to block passage

This week's GOP maneuvering looks similar to what took place in the debt ceiling debate last summer, when Boehner worked toward a deal with the president that prompted blowback from his caucus once details started to spill out. At the time, House Republicans passed "Cut, Cap and Balance," which was essentially the "Plan B" of 2011 - it had no chance to pass the Senate or be signed by the president, but it allowed Republicans to say that they had at least put forth a plan.

Boehner's attempts to place blame for a possible tax hike on Democrats is complicated in part by the fact that the Democrat-led Senate has already passed a bill extending the Bush-era tax rates on income under $250,000, a bill Mr. Obama has said he would sign. House Republicans discussed holding a vote on that bill, in an effort to show that it could not pass the House, but ultimately decided against doing so.

With the nation set to go over the "fiscal cliff" in less than two weeks - and Boehner sending members home for Christmas - the path forward for negotiations is unclear. Boehner is not the only one facing a potential revolt from his base: Liberal Democrats have expressed concern over the president's willingness to change the way inflation is calculated in Social Security and other government programs - a shift to the so-called "chained CPI."

But it is Boehner who faces the larger challenge in keeping his side on board: Many House conservatives fear that a vote for a "fiscal cliff" deal could mean a primary challenge from a tea party-backed candidate. Though the Progressive Change Campaign Committee said Thursday that a Democrat who vote for a deal that includes chained CPI is "inviting a primary," most Democrats do not expect a vote for a "fiscal cliff" deal to mean potentially losing their seat.

The only way to reach a deal may be to let the nation go over the "cliff." When that happens, the expiration of the Bush-era tax cuts will mean that taxes on nearly all Americans will go up. That fact would seem to make it easier for House Republicans to back a "fiscal cliff" deal, since they would be voting for a tax cut, not a tax hike.

But going over the "cliff" could have significant consequences. To be clear, the "cliff" is actually more of a slope: The $1.2 trillion in automatic spending cuts are phased in over a decade - it's not the immediate punch to the cut that "cliff" implies - and there are budgetary maneuvers that can at least somewhat soften the blow of both the tax hikes and spending cuts. But going over the "cliff" could spook the markets and once again shake world perceptions of the ability of the U.S. government to function effectively. And if a deal is not reached relatively soon after the deadlilne, the $500 billion in tax hikes and $200 billion in spending cuts in the first year will likely start pushing the nation back into recession.

Meanwhile, the nation is expected to reach the debt ceiling once again around February, an issue that Mr. Obama has hoped to take off the table as part of a "cliff" deal. And going over the "cliff" means more than just an increase in tax rates and the start of spending cuts mandated as part of the 2011 debt limit agreement: It also means the expiration of the payroll tax holiday, a lack of a patch for the Alternative Minimum Tax, no expansion of unemployment insurance, no expansion of the "doc fix" to keep physician reimbursements from falling, and a host of other outcomes.