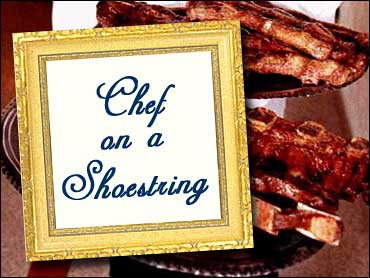 Chef David Burke has a reputation for combining flavors that most people think shouldn't go together. The results of his wild imagination, however, have wowed critics and diners alike.

He responded by creating a delicious three-course gourmet meal for four on our budget of $30.

Chef David Burke is well known for flavorful combinations. His creative dishes have won over critics and diners, despite how crazy the dishes' names may sound.

Burke trained at the Culinary Institute of America and went to France to refine his skills. He worked under several notable chefs, including Pierre Troisgros and Georges Blanc. He then also learned the art of delicious pastries under Gaston Lenotre. Burke says he enjoyed the precision and chemistry of baking. He returned to the U.S. and spent three formative years as Waldy Malouf's sous chef at La Cremaillere in Westchester, New York, where he honed his French cooking skills.

At the age of 26, he became the first American, and one of the youngest chefs on record, to win France's highly coveted "Meilleurs Ouvriers de France Diploma de France Diplome d'Honneur" -- an award given to the chef who shows unparalleled skill and creativity with his native cuisine. He was also one of the first Americas to receive the CIA's August Escoffier Award and recently he was named on of "Nation's Restaurant News' 50 Top R&D Culinarians."

In addition to his restaurant work, Burke is actively involved with culinology, an emerging discipline that marries traditional culinary arts with innovative food science to vastly improve the nutritional and flavor profiles of mass-produced foods.

He has also authored a cookbook, "Cooking with David Burke," which was published in 1995. His second cookbook, "David Burke's Updated American Classics," is due out sometime in 2004.

Burke's menu as our Chef on a Shoestring: an appetizer of Goat Cheese Salad; an entrée of Barbecued Short Ribs; and for dessert, Butterscotch Panna Cotta with Curry Caramel.

Frisée: Burke uses frisée in his salad, which he says pairs nicely with the Boston lettuce because it gives the salad some nice texture and slight bitter flavor compared to the buttery taste of the Boston lettuce. According to the Food Lover's Companion, frisée is a member of the chicory family. It has delicately slender, curly leaves that range in color from yellow-white to yellow-green. This feathery vegetable has a mildly bitter flavor and is often used in the special salad mix, mesclun.

Short Ribs: These are rectangles of beef, which are about 2 inches by 3 inches in dimension and are usually taken from the chuck cut. Short ribs consist of layers of fat and meat and contain pieces of the rib bone. According to the Food Lover's Companion, short ribs are very tough and require long, slow, moist-heat cooking.

Panna Cotta: Chef Burke incorporates butterscotch candies into his panna cotta mixture to add some "crunch" to the very silky dessert. The Food Lover's Companion describes Panna cotta as Italian for "cooked cream." It is a light, silky egg custard, which is often flavored with caramel. It's served cold, accompanied typically with fruit or chocolate sauce.

Combine oil and vinegar with a whisk, or shake in a jar to combine.

Toss lettuce, tomatoes, haricot verts and walnuts in bowl with vinaigrette and arrange in equal portions on 4 plates.

Place goat cheese on each plate, alongside the salad.

Garnish salad with julienned apple if you wish.

Place walnuts in a non-stick sauté pan. Toast lightly for about 2 to 3 minutes on medium heat. Watch closely as they can quickly burn.

Season beef with salt, pepper and chili powder. Place the ribs in a hot pan that contains the vegetable oil. Brown in oil on all sides. Drain oil, then add onions and garlic and cook for 3 minutes. Take care not to brown the garlic.

Remove bacon, reserving bacon fat and sauté cubed potato in reserved bacon fat. Once the potatoes are brown, add mushroom and cook until soft, then add tomatoes, peas, bacon, and herb sprigs and warm through.

Just before serving, toss in chopped chives. Place short ribs on plate, topping them with the grandmother-style vegetables and drizzle with sauce.

In a bowl, add powdered gelatin to the 2 cups of cold heavy cream. Set aside. In a pot, combine the 1 3/4 cups heavy cream, candies and vanilla extract and slowly bring to a boil, so as to infuse the cream with the butterscotch candy.

Once the mixture comes to a boil, stir in the 2 cups of cream with powdered gelatin and stir. Then turn off the heat. Before liquid is completely cooled, strain the liquid through a fine mesh strainer and strain directly into containers of your choice, such as espresso cups, martini glasses or ramekins.

Refrigerate for at least 8 hours so that panna cotta sets properly. Garnish with drizzled curried caramel below.

Add sugar to a pan on very low heat. Stir sugar, helping it to melt. Cook until it turns amber in color, taking care to make sure the sugar does not burn. Once it achieves an amber color, add the warmed cream slowly and stir to incorporate. Add a pinch of curry and bring to a boil, stirring.

Once the caramel mixture reaches a boil, turn off the heat and allow it to cool. Drizzle the caramel sauce on to the firm panna cotta as garnish.

Chef's Note: If you want to prepare this ahead of time, you may do so and it will keep covered in the refrigerator for up to two days.