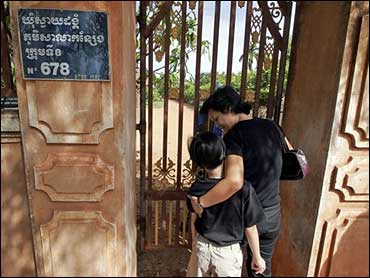 A man driven by a grudge against his former employer spearheaded an assault on an international school in northwestern Cambodia, taking dozens of children hostage and silencing a crying a 2-year-old Canadian boy by shooting him in the head, police said Friday.

The 23-year-old ringleader allegedly persuaded three friends to don masks and storm the school in the town of Siem Reap Thursday morning, herding a teacher and about 30 children into a classroom.

Police say the men, all in their early 20s, wanted to extort money from the foreigners and well-off Cambodians whose children attend the school near the famed Angkor Wat temple complex — the biggest tourist attraction in this impoverished country. The children, aged from about 2 to 6 years, came from about 15 countries.

The alleged gang leader said he initially planned the raid as revenge against a South Korean man who employed him to drive his two children to the school, said Prak Chanthoeun, deputy commander of military police in Siem Reap province.

The suspect said his employer recently got angry with him and slapped his face, causing him to quit his job and return to his hometown in the central province of Kandal.

"Every day, he thought about taking revenge against the South Koreans. So he bought a pistol, then called three friends from his home area," said Prak Chanthoeun.

He then "proposed that they go to the school, find the two Korean children and kill them. But when they arrived there, they didn't see the Korean children," he said.

Ou Em, head of criminal police division in Siem Reap, said police plan to charge the suspects with "illegal detention of persons and kidnaping for ransom."

He said the four are expected to appear in court Saturday. A fifth man was also arrested on suspicion of involvement even though he was not at the scene Thursday.

"They learned there were the children of rich foreigners at the school," said Prak Chanthoeun.

The government, however, was investigating whether the attackers may have had political motives and sought to sabotage Cambodia's tourist industry, which brings in millions of dollars annually for the cash-strapped government.

"We want to know if they belong to any specific group and what their motivation was," said government spokesman Khieu Kanharith.

Dozens of children managed to escape the hostage-takers by hiding or scrambling from the grounds, but police said the ringleader shot the Canadian boy soon after the raid began because he was making too much noise.

Prak Chanthoeun quoted him as saying: "I needed money as soon as possible so I shot this boy and also because this kid was crying a lot, more than the other kids."

A tense six-hour standoff ensued as police negotiated with the gunmen and parents waited anxiously outside. The four demanded money, weapons and a vehicle.

Authorities gave the attackers $30,000 and a van, but when the men got into the vehicle with four children, security forces smashed the van's windows and yanked them from the vehicle.

Some parents grabbed their children and dashed away, while others surrounded the hostage takers and beat them before police took them away, said Prak Chanthoeun.

On Friday, European post-trauma experts and some Cambodian health workers arrived to provide psychological counseling for the victims.

"We're now trying to establish communications with all the parents and teachers involved," said Iris Uyttersprot of the Belgian Technical Cooperation, which coordinates Belgian aid to Cambodia.

The family of the dead Canadian boy had arrived recently so the father could work at a new hotel in normally tranquil Siem Reap. Parents of many children at the school work in the tourism sector.

Cambodian Prime Minister Hun Sen has said the deadly school takeover was a lesson for his government, and pledged to upgrade the readiness of security forces to deal such incidents.