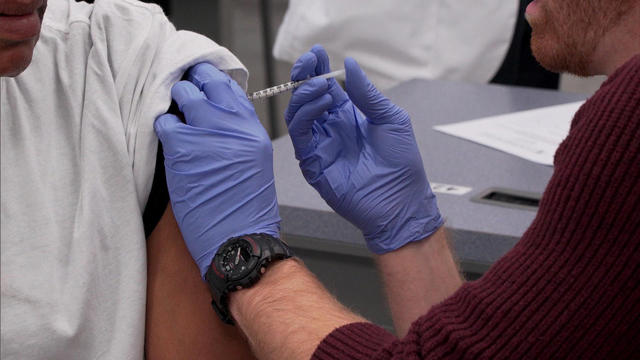 It is flu season, and the U.S. Centers for Disease Control and Prevention says the number of cases is up sharply, with high activity reported in 26 states.

At the Palomar Medical Center near San Diego, the new year ushered in a brutal flu season.

"The day came when we had extended waits in the emergency department up to eight or nine hours for a patient to be seen," said Michelle Gunnett, emergency room nursing director. "We need to figure out other space to see patients."

That space ended up being a triage tent set up right outside the ER.

California is one of the 26 states reporting high flu activity. San Diego County, with 7,314 confirmed cases, has had more than eight times the number seen this time last year.

Other areas feeling the strain include some Miami hospitals preparing flu tents. Emergency visits at a hospital in Toledo, Ohio surged 10 to 15 percent in a single week. A hospital system in Dallas is at critical capacity, and is rerouting non-emergency ambulance patients.

"It's a virus that is a flu strain that's been seen before," he said. "It's not clear why the volume of infection is so high at this time."

The strain, called H3N2, tends to cause especially severe illness. Last season's vaccine was only 32 percent effective against H3N2. It's unclear how effective this year's vaccine will be, but the CDC has advised people to begin antiviral treatment as soon as possible with drugs like Tamiflu.

Even though the flu shot may only be partially effective, the CDC still recommends getting it since some protection is better than none. If you do get the flu, having had the vaccine might lessen the severity of it.