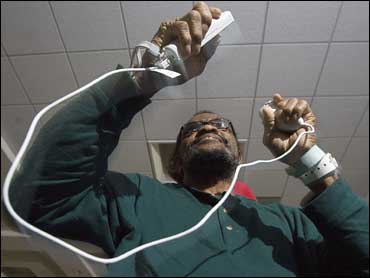 The usual stretching and lifting exercises that help the sick or injured regain strength can be painful, repetitive and downright boring.

"In the Wii system, because it's kind of a game format, it does create this kind of inner competitiveness. Even though you may be boxing or playing tennis against some figure on the screen, it's amazing how many of our patients want to beat their opponent," said Osborn of Southern Illinois Healthcare, which includes the hospital in Herrin. The hospital, about 100 miles southeast of St. Louis, bought a Wii system for rehab patients late last year.

"When people can refocus their attention from the tediousness of the physical task, oftentimes they do much better," Osborn said.

Nintendo Co. doesn't market Wii's potential use in physical therapy, but company representative Anka Dolecki said, "We are happy to see that people are finding added benefit in rehabilitation."

The most popular Wii games in rehab involve sports - baseball, bowling, boxing, golf and tennis. Using the same arm swings required by those sports, players wave a wireless controller that directs the actions of animated athletes on the screen.

Pfc. Matthew Turpen, 22, paralyzed from the chest down in a car accident last year while stationed in Germany, plays Wii golf and bowling from his wheelchair at Hines. The Des Moines, Iowa, native says the games help beat the monotony of rehab and seem to be doing his body good, too.

"A lot of guys don't have full finger function so it definitely helps being able to work on using your fingers more and figuring out different ways to use your hands" and arms, Turpen said.

At Walter Reed Army Medical Center, the therapy is well-suited to patients injured during combat in Iraq, who tend to be in the 19 to 25 age range - a group that's "very into" playing video games, said Lt. Col. Stephanie Daugherty, Walter Reed's chief of occupational therapy.

"They think it's for entertainment, but we know it's for therapy," she said.

WakeMed Health has been using Wii games at its Raleigh, N.C., hospital for patients as young as 9 "all the way up to people in their 80s," said therapist Elizabeth Penny.

"They're getting improved endurance, strength, coordination. I think it's very entertaining for them," Penny said.

"It really helps the body to loosen up so it can do what it's supposed to do," said Billy Perry, 64, a retired Raleigh police officer. He received Wii therapy at WakeMed after suffering a stroke on Christmas Eve.

Perry said he'd seen his grandchildren play Wii games and was excited when a hospital therapist suggested he try it.

He said Wii tennis and boxing helped him regain strength and feeling in his left arm.

"It's enjoyable. I know I'm going to participate with my grandkids more when I go visit them," Perry said.

While there's plenty of anecdotal evidence that Wii games help in rehab, researcher Lars Oddsson wants to put the games to a real test.

Oddsson is director of the Sister Kenny Research Center at Abbott Northwestern Hospital in Minneapolis. The center bought a Wii system last summer and is working with the University of Minnesota to design a study that will measure patients' function "before and after this 'Wiihab,' as someone called it," Oddsson said.

"You can certainly make a case that some form of endurance related to strength and flexibility and balance and cardio would be challenged when you play the Wii," but hard scientific proof is needed to prove it, Oddsson said.

Meantime, Dr. Julio Bonis of Madrid says he has proof that playing Wii games can have physical effects of another kind.

Bonis described his ailment in a letter to the New England Journal of Medicine - intense pain in his right shoulder that a colleague diagnosed as acute tendonitis, a not uncommon affliction among players of real-life tennis.

Bonis said he recovered after a week of ibuprofen and no Wii, and urged doctors to be aware of Wii overuse.

Still, as a Wii fan, he said in an e-mail that he could imagine more moderate use would be helpful in physical therapy "because of the motivation that the game can provide to the patient."

Why some iMessage texts are blue and some are green