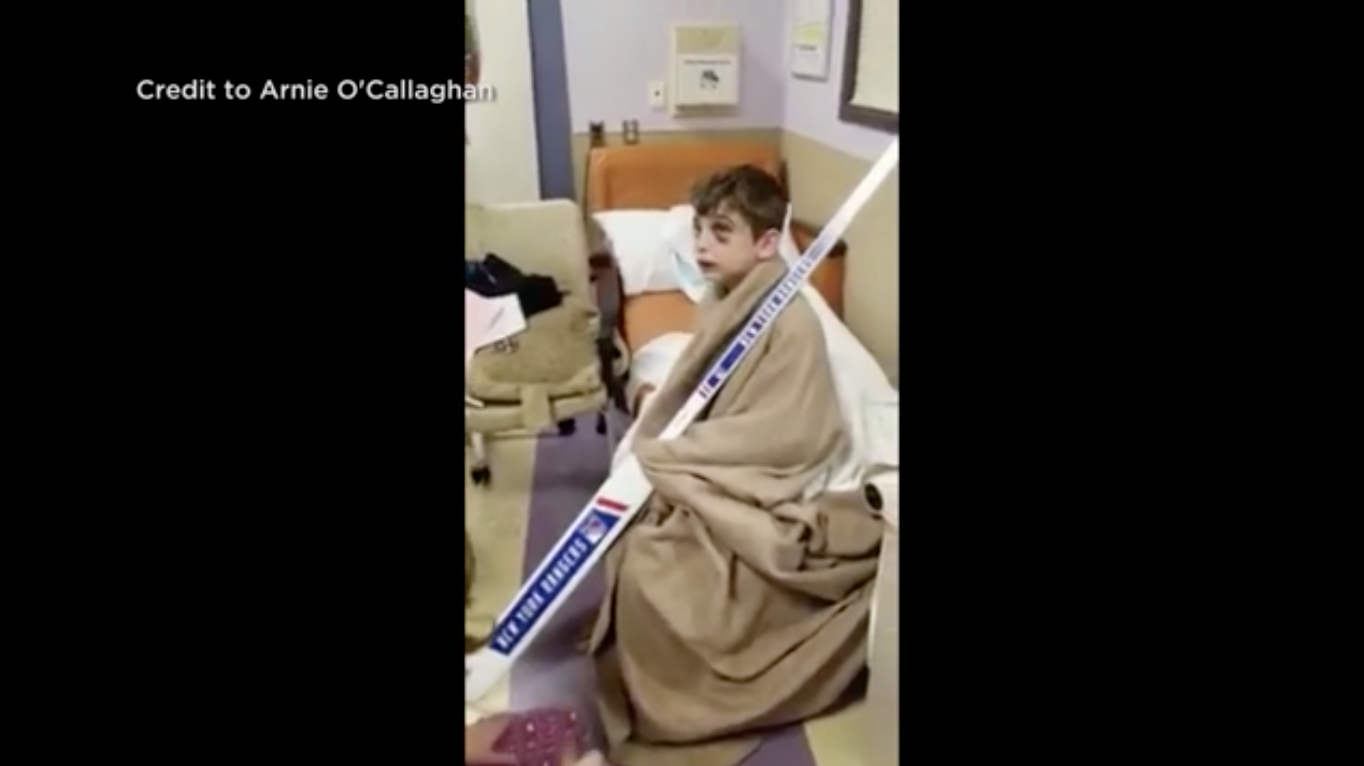 Eleven-year-old Brendan O'Callaghan was seriously injured in a school bus crash in New Jersey last week and has been hospitalized since. The bus was taking fifth graders on a field trip to a New Jersey historic site when it collided with a dump truck Thursday morning. The bus was ripped apart and knocked on its side. Officials said one student and one teacher were killed.

The crash left Brendan with a punctured lung, broken bones and a concussion. Brendan's dad, Arnie O'Callaghan, says his son doesn't remember being in the crash and hadn't smiled in days. But when he was sent a gift from his favorite hockey player, Brendan's face lit up and then he was moved to tears.

"Who's number 30?" his mom asked as she unwrapped the hockey stick. Brendan knew who it was -- his favorite player, Lundqvist. "He signed this for you, Brendan!" his mom said.

"You're in our thoughts and our prayers. Best wishes, The New York Rangers," the team said in the card to Brendan.

In a video his dad took, Brendan appears to be overwhelmed by the gift. He begins crying, then tries to stand up from his hospital bed. "The support has been tremendous throughout friends, family, community and staff of Paramus East Brook Middle School. My family can't thank you all enough," O'Callaghan wrote in the Facebook post, which has been viewed over 100,000 times.

Brendan's family says when he woke up after the crash, he didn't remember the accident, and thought the class trip went on without him. "I don't think he really understands why everyone's doing these things for him now," his dad said. "He wakes up, he thinks he's in a dream, like, a bad dream, and wants to get out."

O'Callaghan said his son is going to need surgery, and when he eventually gets out of Morristown Medical Center, he'll need to go to a rehabilitation center. Brendan will also need some type of nasal reconstruction, his dad says.

The boy "adored" his teacher, Jennifer Williamson. His parents say he still doesn't know that Williamson and his classmate Miranda Vargas died in the crash.

Brendan and the rest of the community are still healing, but this gift showed him that he is not alone.