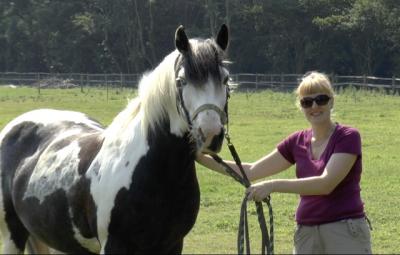 Just as facial expressions are important in human communication, horses are also sensitive to the expressions of other horses, a new study finds.

But unlike humans, equine expression is not limited solely to their face. The study, published in the journal Current Biology, found a horse's ears play a key role.

Previous studies done to investigate communication between animals focused on the same cues humans often use, such as eye gaze. Rather than generalize communication cues for all animals based on humans, researchers Jennifer Wathan and Karen McComb wanted to investigate other cues that animals might use.

"We found that in horses their ear position was also a crucial visual signal that other horses respond to. In fact, horses need to see the detailed facial features of both eyes and ears before they use another horse's head direction to guide them," Wathan explained in a press release.

In the experiment, she and McComb, both of the University of Sussex, took photographs of horses while the animals were paying attention to something. These images were then enlarged to life-size and used to test which parts were most important to other horses. Some of the photos had their ears obscured, while others had their eyes covered. The researchers then placed the photos near two feeding buckets for other horses to see.

What they found was that horses would look the longest when the whole head was visible; they looked less when the eyes and ears in the photo were covered. In addition, the orientation of the model horse's head and body mattered too.

This study challenges the long-held belief that animals with eyes to the side could not glean information from eye gaze.

"Horses display some of the same complex and fluid social organization that we have as humans and that we also see in chimpanzees, elephants, and dolphins," Wathan said.