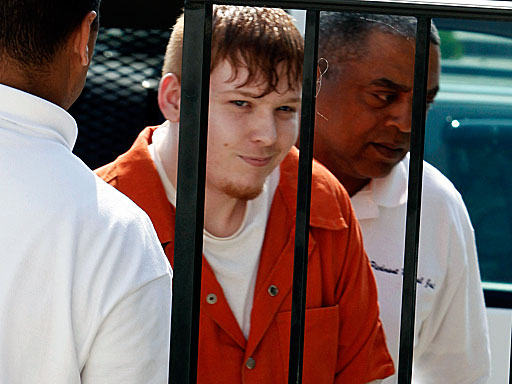 FARMVILLE, Va. (CBS/AP) Sam "Syko Sam" McCroskey, who aspired to being a "horrorcore" rapper, pleaded guilty Monday to killing four people in central Virginia and was sentenced to life in prison.

McCroskey, of California, was charged with killing his girlfriend, 16-year-old Emma Niederbrock; her parents, Presbyterian minister Mark Niederbrock and Longwood University professor Debra Kelley; and Emma's 18-year-old friend, Melanie Wells of Inwood, W.Va., and faced two counts of first degree murder and two counts of capital murder, which could have meant the death penalty if he was convicted at trial.

His attorney, Cary Bowen, said after the hearing that the prospect of the death penalty was a major factor.

Prosecutors said that the women were bludgeoned with a wood-splitting tool while they slept on Sept. 15, 2009. Mark Niederbrock was killed with the tool when he came to check on them, according to CBS affiliate WTVR.

McCroskey's attorneys told the court that the murders happened after their client, with Emma Niederbrock and her friend Melanie Wells, attended a "horrorcore" concert Sept 14. McCroskey and Niederbrock got into an argument at the concert and McCroskey killed her, her mother and Wells the next morning while they slept.

Two days later, on September 17, Mark Niederbrock visited the home and was caught by surprise when he was also struck from behind with the same tool. Sometime between the murder of the women and the murder of the minister Farmville police reportedly conducted a welfare check on the house after Wells' mother called them because she hadn't heard from her daughter in a few days, but the report said that McCroskey answered all the officers' questions "reasonably," according to WTVR.

The bodies were discovered Sept. 18 and McCroskey was arrested without incident on the morning of Sept. 19 while napping at Richmond International Airport.

Family members of the victims sobbed softly during the hearing. They left without speaking to reporters, but issued a written statement: "We have endured a tragedy of unspeakable proportions. We are relieved that justice has been done."

McCroskey's family did not attend the hearing.