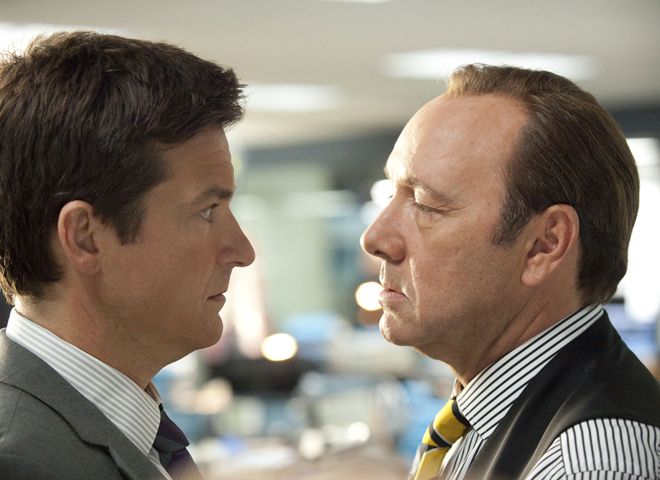 "Horrible Bosses 2": How horrible is it?

The "horrible bosses" are back with a sequel, but it does the film live up to the 2011 original?

The new movie, out Wednesday, stars Jason Bateman, Jason Sudeikis, Charlie Day, Jennifer Aniston, Chris Pine, Christoph Waltz, Jamie Foxx and Kevin Spacey. In the sequel, Dale, Kurt and Chris decide to start their own company but it doesn't go as planned because of a slick investor and a kidnapping scheme.

At last check "Horrible Bosses 2" had just a 30 percent rating on movie review aggregator site, Rotten Tomatoes, with some critics saying the jokes simply fall flat. Others are calling the movie "inappropriate," "racist" and "politically incorrect."

Take a closer look at what critics say:

Bilge Ebiri of New York magazine writes, "It's not really about bosses or office politics. Its only allegiance seems to be to the law of the sequel: It puts the same characters into a vaguely familiar situation, with diminishing, tepid returns. They should have just called it 2."

Claudia Puig of USA Today says: "Bateman's comic timing and slow burn have slackened into blandly dull reactions, while his partners in crime seem to have grown markedly less intelligent...This sequel is misogynistic and occasionally racist. Edgy, inappropriate humor has its appeal, but 'Horrible Bosses 2' is merely offensive, without the barest minimum of wit."

The New York Times' Stephen Holden calls it "one of the sloppiest and most unnecessary Hollywood sequels ever made," adding, "But it is infinitely dumber and not half as funny. ... The story doesn't even try to make sense. You often have the queasy feeling that the screenplay was improvised on the spot."

Los Angeles Times' Betsy Sharkey notes: "The sexually inappropriate and politically incorrect 'Horrible Bosses 2,' the bumbling workplace underdogs played by Jason Bateman, Jason Sudeikis and Charlie Day are about to try their hand at being in charge. And at times, they are horribly funny. Being the boss makes for a lot of incredibly idiotic, highly amusing running amok, especially with a nasty new nemesis in Chris Pine, whose eyebrows and sense of entitlement are completely out of control...Make no mistake, despite some well-earned laughs, 'Horrible Bosses 2' is not what qualifies as a good movie or even a particularly good R-rated comedy. But there is more to laugh at in '2' than the first, so let's go with less horrible, shall we?"

Stephanie Zacharek writes in the Village Voice: "Not every joke hits its mark; maybe only even half of them hit. But the picture skips along briskly, thanks in part to its nimble editing."

Anders Wright of the San Diego Union-Tribune writes: "Even though all three funnymen are on their game, as well as the returning and new supporting cast, the movie relies far more on raunchy humor than its streamlined plot, which, for the record, isn't particularly deep or important."

Tell us: Do you plan to see "Horrible Bosses 2"?