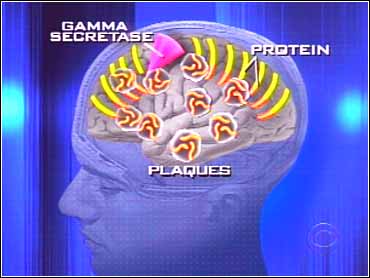 Researchers from around the world gather Sunday in Washington for World Alzheimer Congress 2000, an annual conference on a devastating disease that robs people of their minds and families of loved ones.

This year, however, reports CBS News Correspondent Thalia Assuras, scientists and families with Alzheimer's patients have something to be encouraged about: there is new hope that a disease that will threaten 14 million Americans by the year 2050 could be stopped with a new vaccine in development.

Sarah Harris knows the ravages of Alzheimer's: Her husband Ernie is just 56, but three years into the disease, she must wash him, even brush his teeth.

"One day we woke up and he looked at me and said, 'Who are you?' and that was probably the most devastating thing that could happen to a person," Harris said.

But as puzzling as the disease is to patients an their families, scientists are beginning to grasp its causes.

The physiological problem Alzheimer's patients have is an accumulation of "plaques""—tangles of cut-up proteins that destroy the brains of victims.

Researchers have now discovered a faulty enzyme—called "gamma secretase"—which turns normal proteins into plaques. Scientists are now searching for drugs to block that enzyme and the destruction it causes.

Marvin Citron, a scientist at Amgen, said such a drug "would presumably arrest disease progression and they could possibly lead even to the reversal of some symptoms."

The big news at Sunday's meeting will be a possible vaccine to cure Alzheimer's, one that is about to be tested in humans. In laboratory mice, it managed to shrink and clear the brain of plaques.

"Quite simply what it did in mice is it reduced the amount of plaque in the brain and the development of this ugly gunk, and that's what it needs to do in humans," said Dale Schenk of Elan Pharmaceuticals. "If it does that we have a real shot."

That's good news—perhaps the only good news—for caregivers like Harris, who today have no alternatives.

"It breaks my heart to see it happen, because I can't do anything to make it better," said Harris.

Everyone warns not to expect a quick or easy cure anytime soon. But what scientists do agree on is that, for the first time, Alzheimer's researchers finally have enough basic knowledge of this mysterious disease to make progress possible.