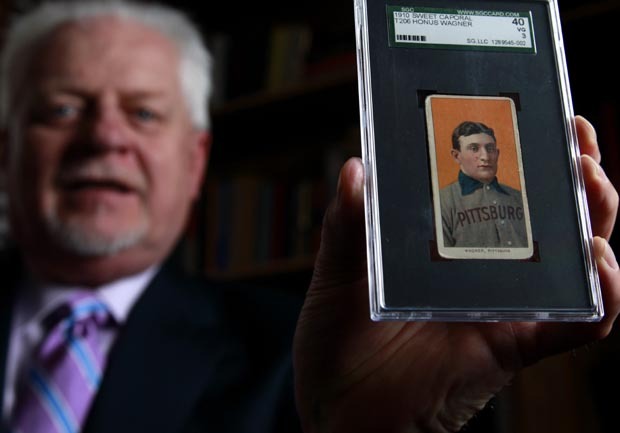 (CBS/AP) ST. LOUIS - A suburban St. Louis man who has been in the collectibles business for a quarter of a century, says the 102-year-old baseball card he's putting up for auction starting Tuesday is about as good as it gets.

Bill Goodwin expects the 1909 Honus Wagner baseball card — one of the most sought-after sports collectibles in the world — to fetch at least $1 million, and perhaps as much as $1.5 million, in the online auction.

"We deal with nice products, vintage stuff, but this is the ultimate," Goodwin, 64, of Sunset Hills, Mo., said. "I can't see topping this, ever."

The card is owned by a Houston businessman who has declined to be identified. The auction continues through April 19.

The 2-1/2-inch by 1-1/2-inch baseball card was released in cigarette packs sold by the American Tobacco Co. from 1909 to 1911. Wagner is a Hall of Famer and one of the greatest players of his era. Nicknamed "The Flying Dutchman," he spent most of his 21-year career with the Pittsburgh Pirates, winning eight batting titles and hitting a career .327.

But what makes the card special is that it was pulled from circulation after about 200 were issued. For years, the consensus was that Wagner didn't want to encourage smoking, especially to children. Goodwin noted, though, that Wagner was photographed with chewing tobacco in his mouth and did advertisements for tobacco companies.

"I, and some other people, think he just wanted to be paid," Goodwin said.

Historians believe about 60 of the 1909 Wagner cards still exist, but many are in poor condition. Based on a rating system by Sportscard Guarantee Corp., the quality of the card Goodwin is auctioning is better than all but five of the Wagner cards in existence, he said.

Goodwin will start the bidding for his card at $300,000 but expects it to bring far more than that.

"Every time a Wagner goes up for auction it seems to go higher and higher and higher," said Bob Snyder of Dave and Adam's Card World in Buffalo, N.Y., which claims to be the world's largest baseball card dealer.

Over the years the art of collecting baseball cards has changed drastically, from a childhood hobby to a billion-dollar industry. Today the market for those collectibles is rapidly collapsing as correspondent Armen Keteyian reports (Watch at left).

"Because of the Wagner mystique you can never overestimate the value in the market," Ceresi said. "When you get into the real rare, cool old stuff like a Wagner card, they come up so infrequently that you never know where that price might go."

Goodwin is auctioning other rare 1909 baseball cards that also may bring in big dollars. That includes an Eddie Plank card that was also pulled from circulation, apparently because Plank wanted to be paid for his image. Plank is a Hall of Fame pitcher who won 326 games, mostly with the Philadelphia A's, in a 17-year career that ended in 1917.

He is also auctioning a Sherry Magee "error" card. Magee was a good but not great player who hit .291 over 16 careers from 1904 to 1919, mostly with the Philadelphia Phillies. What made the card more valuable is the mistaken spelling of Magee's name as "Magie." That card could bring up to $50,000.