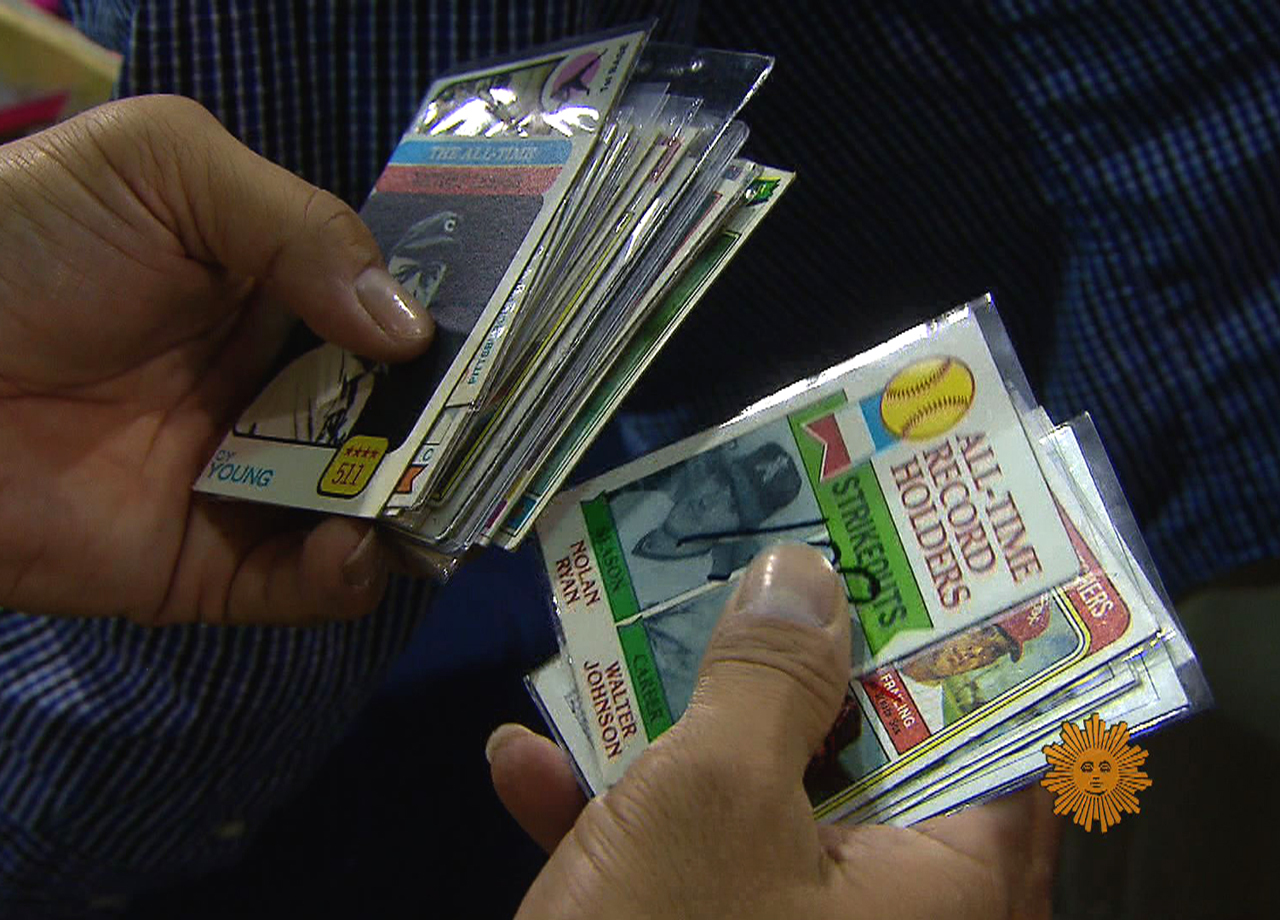 Some baseball cards have become collector's items. But just don't count on it becoming a ticket to Easy Street. As Armen Keteyian is about to tell us, a timeless hobby may really be just a House of Cards:

At the Police Athletic League Youth Center in Parsippany, N.J., there's an irony to be found at the weekly baseball card show started by Mike Gordon back in 1981: The "youth" are missing.

Today the show is a long home run from the mid-1980s when a childhood hobby exploded into a billion-dollar-a-year industry, when thousands of collectors packed shows like this across the country.

"It's definitely an adult hobby," Palma said. "It's turned into an adult hobby. I mean they kind of price themselves out of the kids."

Dave Jamieson is the author of "Mint Condition," a detailed account of the rise and fall of the baseball card industry.

"Baseball cards, for the vast majority of their history, were never necessarily seen as something valuable," Jamieson said."People collected them because they wanted to collect them. They liked the pictures. They wanted to build collections."

Cardboard collections of every player on every team, known as "sets," are built around crown jewels, like the 1952 Mickey Mantle rookie card, destined to become more valuable in the Great Spring Cleanings to come.

"There's this old cliche: My mom threw out my cards. That's what the older guys say," said Jamieson. "The truth is, the cards, they were thrown out - somebody threw them out, whether it was mom, dad, or you just lost them. So those old cards had a chance to become rare.

And that's why they're valuable."

Sports Illustrated came, said Rosen, and produced "an eight-page story, including a centerfold."

A former New Jersey copy machine salesmen, Rosen has been buying and selling baseball cards and memorabilia for 34 years. He said his biggest year was 1989, when he made about $8.7 million in sales.

Last weekend Rosen was at a show in Chicago. One of only five such shows he attends annually (down from 45). Thirty-thousand people used to come to events like this, lined up out the door - entire families of collectors under one roof.

"Can't happen anymore," said Rosen. "The grandfather's dead. The father doesn't have the money to spend. And the son has not really enjoyed the business anymore because he's into computers and girls."

But that's only part of the story. Truth is, as prices rose, more manufacturers - led by The Upper Deck Company - jumped in. In the early '90s an estimated 81 billion cards were printed in a single year.

And then, the bubble burst. The card business struck out.

Today it's down as much as 75 percent.

"I think everybody got greedy," said Jamieson. "The blame can go in a lot of different places. It can certainly go to the card makers, who were printing this stuff like they were basically printing money and were glutting the market."

Add in an eight-month baseball strike in 1994, the explosion of the Internet, video games and soaring prices for glossy gimmicks - and what you get now is Tuesday night in Parsippany, where most of the stuff , on collector finds, is fairly worthless . . . and the likely death of a national pastime.