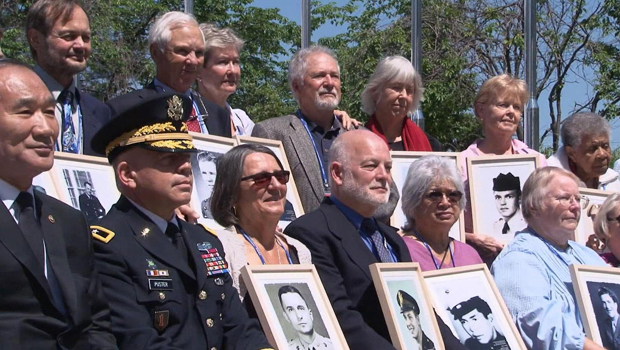 For three years in the early 1950's, troops from the United States fought a very costly war in Korea. The battle to keep the Communist North from conquering the South is sometimes referred to here in America as "The Forgotten War." But the U.S. sacrifice is far from forgotten by the nation our troops helped save. Seth Doane has a Dispatch from South Korea:

Korea, a crowded little finger of land extending out of Asia's mainland, is a nation not much larger than the state of Minnesota.

On June 30, 1950 -- five years after World War II ended -- America went to war again. U.S. ground troops were sent to Korea, where forces from the Communist North -- aided by the Soviet Union and then China -- were threatening the pro-Western government in the South.


The three-year conflict, overshadowed by WWII, is often called the "Forgotten War." And its forgotten victims are the families of nearly 8,000 men still classified as "missing in action."

"MIA is a very difficult term to live with -- not knowing," said Sharon Durrell.

"It's hard to put closure when you don't know," said Sheila Badzioch.

John Zimmerlee's father, an Air Force captain, disappeared while flying a night mission in 1952. He says he "felt like an orphan, was an orphan. They called us war orphans.

In May, the siblings, spouses and children of two dozen U.S. service members who never returned from the battlefield were invited as guests of the South Korean government to visit the country where their loved ones were last seen. For most, it was the first time they'd ever come here.

The trip was organized by volunteer Sunny Lee, who was born during the war, near Seoul.

She says the South Korean government spent the money to bring the families here to pay them back -- "to show them how much we appreciate it."

And to introduce Korea to the families who sacrificed so much -- showing off its music, its folk dances, and even its fashion.

Families paid for half of the flight. Everything else was picked up by the South Korean government.

"It's overwhelming," said Suzanne Schilling. Her dad, a Marine pilot whose plane was shot down over North Korea in 1952, was honored as a hero.

"We all thought it was a tour of Korea," she told Doane. "We would see battlefields, we would see memorials. Had no idea that there were going to celebrate us at the level that they did."

Memorial services were held at the national cemetery, at a military base, and near the demilitarized zone that divides North and South.

At the war museum, families found the names of their loved ones inscribed on a wall. Robert Morin's father disappeared during a reconnaissance mission behind enemy lines.

"I've never seen him memorialized or commemorated or anything of that nature in the United States," he said. "And to come all the way to Korea and see his name on the wall was a shock, a surprise, and something I was not emotionally prepared for at the time."

Morin was also not prepared to see South Korea's appreciation for America's role in a war fought more than 60 years ago.

"The authenticity of their gratitude is astonishing," he said. "I mean, they could not possibly fake what we're experiencing from people here. There aren't that many good actors in South Korea."

Sunny Lee, who now lives in Utah, first pitched to the Korean government the idea of a trip for these families of those missing in action.

Doane asked, "Why do you take this so personally? Why do you feel so deeply?"

"Well, it's like if you're in a burning car. Somebody came to save your life. Don't you feel that they're your hero, to pay back for the rest of your life?" she replied. "I feel like that."

When the armistice was signed in July 1953, South Korea lay in ruins. People were starving. Millions were dead.

But within 60 years, and with the help of foreign aid money, South Korea transform itself into the world's 14th largest economy and sixth largest exporter, in part due to the popularity of Korean brands like Samsung, LG, Kia and Hyundai.

Economists refer to it as the "Miracle on the Han River" -- a miracle that South Koreans insist resulted, in part, from the American sacrifices that earned them their freedom from Communism.

This trip was a celebration of that sacrifice, for what John Zimmerlee calls "war orphans."

"I'm here with all these other war orphans and we all have that camaraderie," he said. "All those pictures kind of arose in one line behind me. It was like all the guys were here, the guys that were missing, had come back. It was the most emotional I have gotten about this whole issue, and I have had emotional moments in the past. All of a sudden, it made sense."

Finally, finding a sense of closure more than 60 years later.