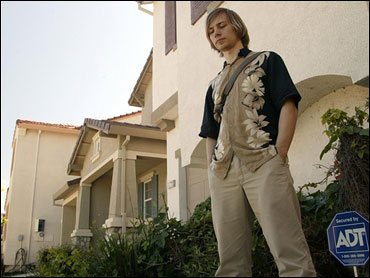 Perhaps the best argument against a government bailout of underwater homeowners can be found in the character of Casey Serin, a 26-year-old would-be mogul in Sacramento, Calif.

In hopes of getting rich quick, Serin took out $2.2 million in mortgages on eight houses, some sight unseen. He lost all of the properties, most to foreclosure, and says he's recently contemplated living on the streets.

Serin achieved a measure of Internet fame by chronicling his failures at real estate speculation on a now-defunct blog, where an audience of so-called "haterz" spent endless hours critiquing his innumerable financial missteps. After selling his Web site to pay down his then-wife's credit card debt, Serin has had time to reflect on how he and other speculators contributed to the biggest housing bubble in history.

"I personally don't believe in bailouts," Serin said in an interview this week. "If you don't get hurt, what's going to stop you from taking on the risk next time? You're interfering with the natural order of things."

Too bad our elected leaders in Washington, D.C. aren't half as thoughtful as a failed housing speculator.

The reality is, as I wrote in an earlier column, housing prices leapt too high, too fast, beyond what economic fundamentals permit.

This is why house prices are falling back to earth. Speculators have moved on or, like Serin, are courting bankruptcy. Lending standards are returning to normal. Debt has given way to moderate thrift. The supply of homes exceeds demand in many areas; prices will stabilize only when homes become affordable again and excess inventory is sold.

Unfortunately, our representatives seem unable to let a return to normalcy take place.

Taxpayer aid to prevent foreclosures on mortgages acquired by the government was part of last fall's $700 billion bailout. Rep. Barney Frank, a Massachusetts Democrat, now wants that money to be used to rewrite mortgages and reduce monthly payments. Politicians are being egged on by homebuilders, real estate agents and lumber companies that set up FixHousingFirst.com a Web site urging taxpayer-funded "foreclosure prevention" and "discounted mortgage financing" to "increase home values."

That's a little like propping up Pets.com shares during their post-dot com bubble slide toward 19 cents and eventual liquidation.

No matter what Washington promises, homeowner bailouts will aid the undeserving - the Casey Serins and speculators of his ilk - at the expense of the fiscally prudent. Why should Americans who rented and saved their pennies for a 20 percent down payment be taxed to bail out those who gambled and lost? Where in the U.S. Constitution has Congress been delegated the power to hand out such largesse? And do banks and lenders need government help to decide whether writing down loans is better than expensive foreclosures?

This is not politically correct to say, but the reality is that not everyone can afford a house. A fast food assistant manager makes $9.95 an hour, and the median price of a new home sold last fall was around $218,400. With reasonable assumptions about taxes and interest rates, our assistant manager would have $0 a month left over for food, clothing, and car payments. Unless a house is unusually cheap, renting could be wiser.

Yet for at least a decade, the official policy of the U.S. government has been that if you breathe, you qualify for a mortgage. As George Mason University economics professor Russell Roberts noted, that official policy is what created the housing bubble - nonexistent oversight of Fannie and Freddie; the Federal Reserve's artificially low interest rates; the Community Reinvestment Act and its Clinton-era expansion; and a 1997 law that made capital gains tax-free.

We know how that turned out. Americans queued up for exotic zero-down mortgages on houses they couldn't afford, with unscrupulous lenders taking advantage of greedy buyers, all with Uncle Sam's blessing. Then came foreclosures and trashed credit and realization that many buyers would have been better off renting all along. (The average home ownership rate from 1970 to 1990 was 64 percent, according to U.S. Census data. Today the rate remains at a historically high figure of 68 percent.)

"Pain is one of the best ways to make change happen," said Serin, the speculator-turned-tell-all-blogger. "If you were just completely reckless about it, you deserve to fall flat on your face. I was reckless. But I don't know what I deserve."

One thing Serin doesn't deserve is a taxpayer bailout. Alas, if Rep. Frank and his political allies have their way with our pocketbooks, others who were just as irresponsible and dishonest will receive precisely that.

Declan McCullagh is the chief political correspondent for CNET. He previously was Wired's Washington bureau chief and a reporter for Time.com and Time magazine in Washington, D.C. He has taught journalism, public policy, and First Amendment law. He is an occasional programmer, avid analog and digital photographer, and lives in the San Francisco Bay area. His e-mail address is declan.mccullagh@cnet.com
By Declan McCullagh
View CBS News In