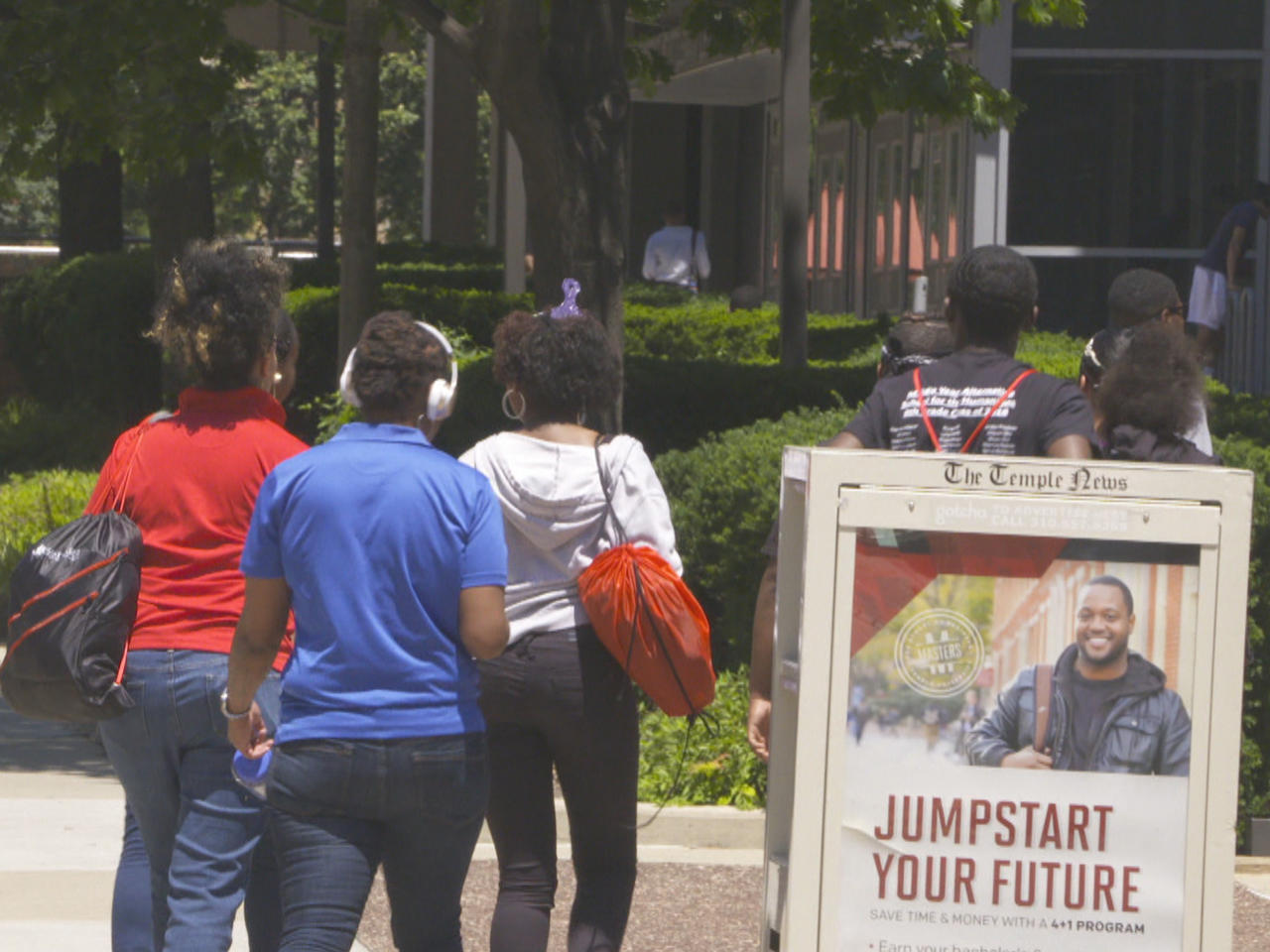 College senior Jasmine Bigham can almost taste graduation. Like most students at Humboldt State University, nestled in the shade of the California Redwoods, finals are coming, and she's studying hard. But it's her life outside her college classroom that may be the toughest test of all. "The hardest thing was just not being able to find housing, and so that was, like, the big issue that stood in my way," Bigham said.

"So, what did you do?" asked correspondent Lee Cowan.

"I lived in my car, and then I kind of couched surfed. After that I moved into this big trailer, and then the trailer roof collapsed a little bit!"

All of that makes the van she now lives in seem not so bad. She lives in a parking lot not far from the library.

Being homeless isn't something you'd expect from a student on a Ford Family Foundation scholarship, but even that money wasn't enough to help with the high cost of housing near campus.

"There was some emotional points, you know, where I just was like crying 'cause it was hard," She said. "It's how I think about things – I put myself here, so I had to deal with it."

"But you put yourself here for a good reason, though, to get through school," said Cowan.

"Yeah, for sure. Yeah, there is a goal at the end of the tunnel, I guess."

Every morning she makes her way to a women's locker room on campus. There, she brushes her teeth, showers, and then heads off to class. Later, it's back to the van.

Cowan asked, "What is it that's so important for you to go to school and get your degree that you'd put yourself through all of this?"

"I'm gonna go become something," she replied. "And I'm gonna succeed in it and keep trying, you know? If things are hard, you just gotta keep trying."

The number of homeless college students struggling just like Bigham is hard to quantify, but it's big. According to financial aid applications, there are more than 68,000 students who claim to be homeless.

"I think the idea that hard-working, talented people who are trying to get an education are being derailed by homelessness, is a crisis," said Sara Goldrick-Rab, the leading national researcher on the problem. She's a professor of higher education policy at Temple University in Philadelphia, and the founder of the Hope Center.

"One of the things that's changed in the United States over time is that, if you grew up without money, we have sent a pretty strong signal to those students that financial aid is available, and you should try college, because it's your route out of poverty," Goldrick-Rab said.

Cowan said, "So, part of the problem is that people who weren't going to college before …"

"Go to college now. It's hard to view that as a problem. I'd say the problem is that they're going to college but we didn't build the support for them."

Unlike elementary and secondary school students, whose families can get some support from things like federal free breakfast and lunch programs, for college students much of that assistance dries up.

Goldrick-Rab says whenever she tells people about the problem of homeless students, they seem surprised and shocked: "It's been hidden. I think a lot of people didn't talk about it. I also think that most people just think about tuition; they don't think about living [expenses]."

Some of those struggling with housing responded to a recent survey that Goldrick-Rab conducted. It was the largest of its kind ever done, involving more than 43,000 students at 66 institutions. The result: Nearly one in ten college students said they were homeless in the last year, meaning they had at least one night where they didn't know where they were going to sleep.

"I tend to think the people who are struggling the most are not taking our surveys," said Goldrick-Rab, "and that's the part that scares me."

"That you don't know how deep the problem really is?"

"That the problem is actually a lot worse."

Colleges generally don't like to talk about homelessness, she said, and neither do most students.

Dom Coronel is a 22-year-old undergraduate at DePaul University in Chicago. He told Cowan he did not want anyone to look at him differently, and so kept being homeless to himself.

"There's that underlying feeling of just shame, that feeling of loneliness," he said.

Coronel's parents have been out of the picture since childhood – his mom has struggled with addiction, and his dad has been in and out of prison.

Money for his tuition comes from a patchwork of funding – scholarships, student loans, and some financial aid. He stretched all of that as far as he could, but last spring he found himself living in a shelter outside of town. He told Cowan, "Sometimes you don't make it to the shelter in time because you have to be there at a certain time to get in. Sometimes I had to sleep in parks or forests."

"How often would you go hungry?"

"Like, two days without really eating a meal. I hate to say it, but I've eaten out of the trash before. When you're just trying to survive, you'll do whatever it takes."

He had to sneak onto a commuter train just to get to class most days, and one day it almost became too much to bear. "As passionate as I was about my classes, and about the things I was learning about, it just got too hard to be homeless," Coronel said. "I remember I was standing on the platform of the L train, and honestly I thought about jumping, and just giving up."

Cowan asked, "What kept you from jumping?"

"I think it was knowing very well that there are a lot more kids like me," he replied.

Depaul USA, a national homeless charity, has seen the problem all across the country, and in Chicago started a homeless housing program called Dax designed just for students.

It leased a house where it could offer at least a half-dozen students a low-cost place to stay, as long as they keep up their grades and do chores around the house.

Morris has never forgotten the day Dom Coronel came asking for help: "He came into my office and I said, 'Hey, have you eaten today?' He said, 'No.' I said, 'Let's go get lunch.' And in the middle of lunch he stops eating. He said, 'Abe, I'm sorry, I can't eat no more, because I don't eat that often, my stomach has shrunk, and I can't eat that much food.'

"And at that point it hit me, like, Oh my gosh, this guy needs some place to go NOW."

So, Morris converted an office into one more bedroom, an act that very likely saved Coronel's life. "It's still surreal to me," the young man said. "I still wake up sometimes and it's like, Whoa, I'm here!"

"Yeah, even now. I feel like a weight has lifted off my shoulders. Like, I can concentrate on my classes. I made it on the Dean's List. I had never done so well during a college quarter."

"But you never had this stability before."

Homelessness is indiscriminate. It can effect anyone, anywhere. Sara Goldrick-Rab has found students struggling all across the country, from big universities to rural colleges. "There are middle class people going through these problems and they're going through them for the very first time in college," she said. "Most people don't realize the research on homelessness indicates that one of the guiding factors contributing to homelessness is just bad luck."

Luck isn't something most educators can spot, even if they see these struggling students every day.

Kathryn Jeffery, president of Santa Monica College in Los Angeles, told Cowan, "I remember walking across campus one day and a young man walked up to me and he says, 'Are you the college president?' And I said, 'Yes, I am.' And he says, 'Well, I wanna talk to you because I live under a freeway.'

"And he ended by saying, 'And I want you to know that there are other students on campus just like me.'"

Santa Monica College doesn't offer housing, but the school has tried to address students who are going hungry by offering food pantries. "We have a variety of canned beans and ravioli, and of course peanut butter – all the college staples!" Jeffery said.

While helpful, they're not the healthiest options, so students worked with administrators to organize a farmers market, where fresh fruits and vegetables are handed out each week, no questions asked.

But perhaps the most innovative idea came from UCLA students who, with the help of donations and grants, set up the Students 4 Students Shelter in a Santa Monica church. It's completely run by more than 80 student volunteers like Jordan Vega.

"We have four student volunteers from UCLA who are on-site every day," Vega said. "We cook dinner for the residents. We eat together. We really bond with each other … It's a community."

Maritza Lopez knows she was lucky to get in. There's a waiting list of at least 100 students.

She's studying Art History at nearby Santa Monica College, and shares a small room with nine other homeless students. As small as it is, it's coed.

Cowan asked, "So, you don't have a lot of privacy here though, do you?"

"I think it's pretty private," Lopez replied. "I can't really ask for too much, 'cause I'm already, I've been given a lot."

Because the students who run it also have to go to class, the shelter has to empty out from 7:00 in the morning all the way until 7:00 at night.

Usually Lopez passes that time by studying on campus. "I always kind of say, 'Hey, let me think about today and tomorrow. How am I gonna survive? Like, what can I do today? What can I do tomorrow?"

"So, where does all that optimism come from?" Cowan asked.

"I don't know! I got a little soul in here, right?" she laughed.

"You've got a big soul, I think!" Cowan replied.

This past June, Lopez got her associates degree, graduating with honors: "It's good," she said. "It's not high honors, but..."

"You say that like you're shy about it. That's fantastic!" Cowan said.

"It hurts though, like, knowing that, what if I did have a place to live? I could have done way better than what I'm doing now."

Lopez is now out of that shelter, and she's working on her Bachelor's at her dream school, UCLA, which is covering her tuition.

It was the volunteers at the Students 4 Students shelter who helped hook her up with cheap housing near campus.

As for Jasmine Bigham, she and her van have finally left that parking lot. Last month, she graduated from Humboldt State with a degree in kinesiology, with hopes of becoming either a teacher or an athletic trainer.

We will likely never know just how many homeless students start college but have to leave without their degrees, an elusive statistic Dom Coronel says is actually a loss for everyone.

"We don't wanna be looked at, 'Oh, there goes that homeless college kid,'" he said. "We are future lawyers. We're future doctors and future politicians and nurses and teachers. We may be homeless, but we're a lot more than that, too."