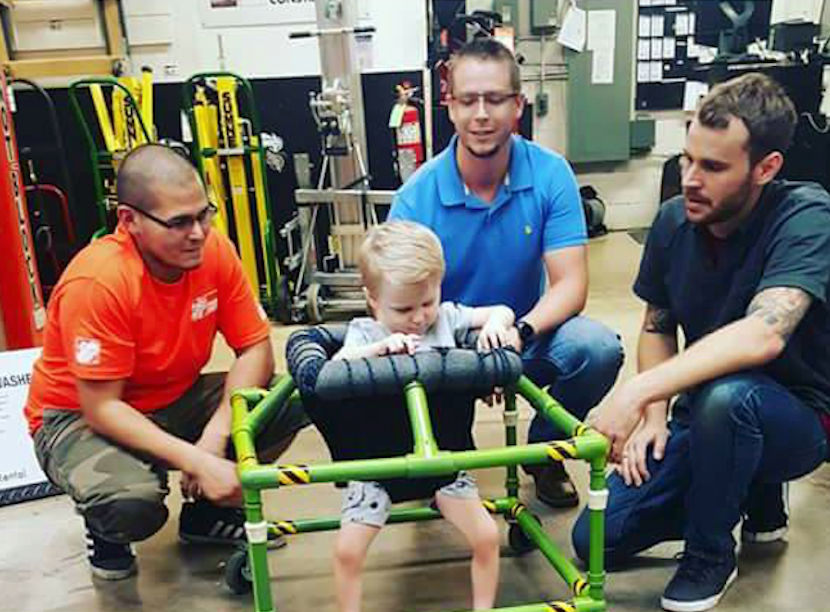 Watching her blind 2-year-old son stand using his very own customized walker for the first time was like a “fairytale” for his mother.

And it wouldn’t have been possible without the help of three total strangers, who the boy’s mother, Jessica Johnson, calls “angels on Earth.”

The mother from Fort Worth, Texas, scoured the internet to find special walkers for her son, Silus, who suffers from Norrie Disease -- a rare genetic disorder that leads to blindness in male infants and delays muscle development. Silus is already too tall for traditional walkers and needs one that will accommodate him as he continues to grow. It wasn’t until she walked into a local Home Depot in North Richland Hills that she found the answer she was looking for.

Silus’ great grandpa went to the store last week searching for tools to build his own adjustable walker. After explaining his needs to store supervisor Matt Spencer, he was introduced to two employees that would change his great grandson’s life.

Well, it did really happen.

The two employees, Eric Bindel and Christopher Wright, volunteered to help create a customized walker for the little boy.

Three days later, Johnson and Silus came to pick it up.

Johnson couldn’t believe her eyes as she examined the lime green walker on wheels. Carefully, she picked up Silus and put him in a bouncy chair in the center.

“As soon as we put him in there he was spilling around,” she said. “He was able to move; the cause and effect of him doing that -- that’s awesome.”

Silus’ doctors say it’s important for him to move around to build up strength in his muscles.

Having just moved to Texas from Oregon, Johnson said she was moved by the strangers’ kindness.

“All I can think is it’s God’s will,” she said. “God puts people into our lives for a reason.”

When the employees saw the little boy jumping around in the walker, they were all smiles, Johnson said.

The walker is adjustable to Silus’ height. So, when he grows, it grows with him.

That means Johnson will be able to focus on helping her little boy walk and strengthen his muscles for years to come.

“We’ve alread added bells on it and other toys to kind of play with; it’s really exciting to actually see him enjoy it and sit in it,” Johnson said.