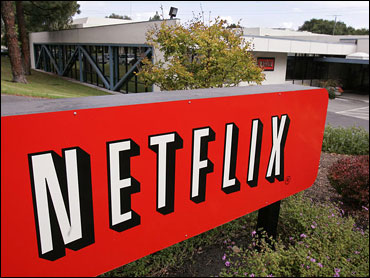 This story was written by CNET's Greg Sandoval

At this point, who could begrudge Reed Hastings and his Netflix management team from celebrating, from performing the corporate equivalent of an end-zone dance?

Wall Street and Netflix subscribers appear overjoyed with the direction that Netflix's CEO has the Web's top video-rental store pointed in. The only people who don't seem pleased with Netflix's success work in Hollywood.

Just days before Netflix reported third-quarter earnings that jumped 48 percent from a year ago and subscriber growth of 28 percent during the same period, two executives from different studios told me they aren't getting their fair share.

"The thing with Netflix is that people are taking notice that they keep reporting these big quarters," said one studio exec. "We aren't participating in that and that's going to change."

Another entertainment executive told me Netflix contributes less to the studios' bottom line than other distribution modes, such as DVD sales. In addition, Netflix and other digital rental stores, including iTunes, may also be luring customers away from these more profitable outlets. He said that the film industry is just like any other supplier - it wants to see the partners who pay most for its product fare the best.

The problem here, of course, is that Hollywood's best partners are ailing. DVD sales are in decline. Cable providers are seeing customers drop their subscriptions and turn to the Internet for entertainment. Theater revenues are up but that's due to rising ticket prices. The more important statistic is the number of moviegoers and that's shrinking, according to one of the studio execs.

As this Hollywood tearjerker plays out, Hastings and his Netflix crew continue to report knockout earnings. In addition, Apple CEO Steve Jobs is growing iTunes' video-rental business as well as its download-to-own sales, according to multiple studio sources.

In this environment "there's a lot of jockeying for position," said Tom Adams, the principle analyst and founder of Adams Media Research, a company that has provided market data to Hollywood for 25 years. "The studios don't love the rental market as much because the focus has always been on sales. They've had Wal-Mart and Target, stores that are willing to take slim margins for the traffic-generating capability that comes with selling DVDs."

Look at the situation from the eyes of a studio chief: Netflix charges $9 a month and that enables a subscriber to watch all the movie titles Netflix offers online. Compare that with the money the studios get when a consumer pays $14.95 for a single DVD.

The lords of tinsel town would be wise to keep an eye on Hastings. It was just a couple of years ago that many predicted the company he co-founded in 1997 would be crushed by digital-distribution services.

But Hastings is turning out to be the John Elway of digital entertainment. Like the famed former Denver Broncos quarterback, the Netflix CEO has a knack for executing better than competitors and leading his troops out of jams. Plenty of pundits wrote not long ago that online-video services would eclipse Netflix's DVD mail-order business - with its profit-chomping warehouses, big postage costs, and inability to provide instant gratification. Customers who rent discs must wait until the mailman arrives to watch a movie.

But Elway engineered "The Drive" and Hastings' engineered the strategic partnerships with Microsoft's Xbox, Roku, LG, Sony and other set-top makers that enable Netflix users to watch streaming video on their TV sets.

Under Hastings' stewardship, Netflix has staked out prime turf. By bridging the so-called "last 10 feet" from the Web to the TV, Netflix promises users a viewing experience that rivals the one provided by traditional cable and broadcast stations. Apple can't do this (who owns an AppleTV?). Ad-supported Web video services, such as Hulu or YouTube, aren't hooked up to the TV yet in any important way.

As for Hollywood's concerns that Netflix is hurting more profitable outlets, there appears to be room for negotiation.

Hastings suggested during Netflix's third-quarter earnings call (PDF) on Thursday that he is willing to share more with the studios once more customers opt for streaming content, which will reduce the costs of shipping DVDs.

"In the long-term, as we license more and more content for streaming and as consumers use streaming more, that enormous and growing postal expense will start to flow to content owners and we will become one of the studios' and networks' largest customers," Hastings said. "The rate of evolution for this depends both on how much streaming content we can license and how many homes have a Netflix-ready device or enjoy watching video on a laptop."

Hastings appears to be sending Hollywood a message here by saying that Netflix's streaming service will help turn it into a much more profitable partner, provided the studios give the video store greater access to films and TV shows.

Adams said that Netflix has enjoyed a "grace period" with the studios because the success of Netflix's steaming service caught many in Hollywood by surprise. (Note: Adams credited Microsoft's Xbox with fueling much of the speedy growth and said that his research shows Xbox households are watching 17 hours of Netflix streaming content a month, a number he called "significant").

Adams said he thinks a deal will get done that benefits the studios and Netflix.

Maybe, but Hollywood has a history of going to war with companies like Netflix when negotiations don't go its way, according to Hastings.

"Occasionally, a studio tries to find ways to restrict a rental firm's ability to buy at retail," Hastings said during the earnings call on Thursday. "But retail is so big and diffuse, this strategy has never worked. Four years ago, Blockbuster, in an attempt to have an exclusive in rental, paid the Weinstein Company to block all purchases of their films by Netflix. This attempted blockade continues today but we've never had a problem buying Weinstein DVDs."

One thing to keep in mind is that the "blockade" he was talking about was for physical discs. Part of the reason why it wasn't successful is that as long as a video store can find someone to sell it a DVD the law allows them to do pretty much anything it wants with the disc.

This doesn't apply to streaming movies, however. To distribute films online, Netflix needs to reach an agreement with the studios. The studios could conceivably stifle the growth of Netflix's streaming business by holding back content.

Here's something else: Hastings said there's talk the studios may attempt to create a brief "sales-only" period. He didn't provide many details, but he also didn't sound too worried.

"If some studios choose to support a sales-only window and delay rental, it would shrink the rental market a bit, but it would grow sales revenue for those studios," Hastings said. "If we can agree on low enough pricing for delayed rental, it could potentially increase profits for everyone...A short sales-only window would be a benefit to DVD sales and therefore, to the health of the whole DVD ecosystem. Plus, it would allow us to spend less on discs and more on streaming content. "

What this means to me is that the studios may protect DVD sales while making Netflix even stronger in the rental sector. We've seen what Hastings can do when the odds are against him.

How do you think he will fare when he's out in front?