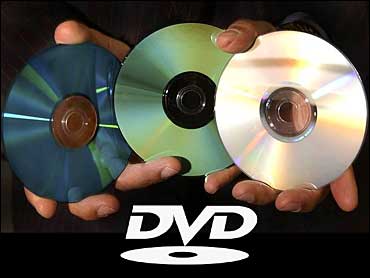 Brian Martin, a computer consultant in Maryland, is careful when he handles the plastic discs in his DVD library of more than 200 movies. But accidents - and scratches - still happen.

"The worst thing is, one little scratch is enough to make the movie skip forward a chapter," says Martin, who estimates his collection at more than $3,000. "That's become really annoying with a few of mine."

An increasingly popular class of software lets consumers make duplicate DVDs as backups by copying movies onto inexpensive blank discs using their home computers. With two mouse clicks, one such package creates a near-perfect copy of a two-hour feature in as little as 20 minutes.

But movie buffs who want to make backups of their treasured DVD libraries are running into a formidable enemy: Hollywood, where studio executives worried about convenient, widespread movie piracy are about as nervous as Abbott and Costello in the mummy's tomb.

Painfully aware of technology's impact on the music industry, moviemakers were in court Thursday to persuade U.S. District Judge Susan Illston in San Francisco to declare the distribution of such software illegal under the 1998 Digital Millennium Copyright Act.

"It is precisely the type of case Congress foresaw, predicted and legislated," a lawyer for the film studios told the judge.

The legal battle, which focuses on software products sold by 321 Studios Inc. of Chesterfield, Mo., is emerging as one of the most significant technology debates in years. Congress, which once appeared inclined to intervene, is sitting out until the courtroom fight gets resolved.

The powerful Motion Picture Association of America argues that this type of software circumvents the anti-copying digital "locks" that studios employ on DVDs, which would be illegal under the 1998 copyright law. There are typically no such locks on music CDs.

The MPAA maintains that consumers aren't permitted to make personal backups of DVDs, saying a movie buff whose disc becomes scratched needs to buy a new one.

Robert Moore, the head of 321 Studios, which sells its copying software for $99, said Thursday his company has the capability to develop other products that wouldn't be affected by an adverse court ruling against the DVD copying software.

"The future of our company is not at stake, but the future of consumers' expectations and what they perceive to be their rights are in question," Moore said. "This case represents something very significant; it could set the standard."

The latest software product from Moore's company, called "DVD Xpress," is enough to cause fits for studio executives. Unlike similar programs that can take hours to make copies and span most Hollywood movies across two blank discs, Xpress can squeeze a near-perfect copy onto a single disc in as little as 20 minutes.

"If I own the DVD and make a copy for my own personal use, there should be no problem with that," said Martin of Laurel, Md., who doesn't use 321's software but has followed the technology debate. "They're being a little overzealous in stopping me from protecting my assets."

In a minor concession to Hollywood, 321's software adds to each blank disc a warning about copyright laws and refuses to make further copies from a duplicate disc. But experts note that other copying software, freely available on the Internet, doesn't include such concessions and can make third- and fourth-generation copies just as perfectly.

"It's almost to the point of a one-click operation, where even the average Joe can make a DVD backup," says Adam Sleight of San Diego, who runs the popular Mr. Bass Web site with instructions on copying DVD movies.

Sleight says he's copied hundreds of DVD movies onto blank discs, including many Disney films for his two children. One advantage of his efforts: When Sleight makes copies, he eliminates five to 10 minutes of previews and advertisements that typically precede his children's movies.

Sleight acknowledges that "probably the majority of people" use such software to make illegal duplicates - such as copies of DVD rentals or movies borrowed from friends.

"That is probably what happens a lot of the time, but I think the movie studios should prioritize," Sleight said. "They should target the people in China and the street vendors who sell them at a profit. The true thieves are the people who make a profit off them."