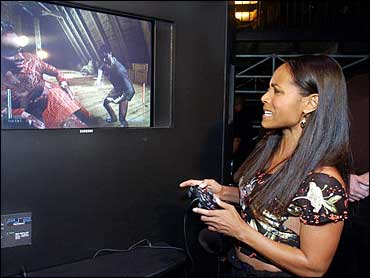 It was virtually "Game Over" from the start for designer Dave Perry's video game version of "The Terminator."

Neither Arnold Schwarzenegger nor co-star Linda Hamilton would allow him to use their images for the 1992 Sega Genesis title, which was ultimately forced to focus on a third character, who dies at the end of the film.

"They said, 'You can't have the Terminator in your game,"' Perry recalls. "The vision of what it could have been was so ruined."

More than a decade later, however, bigger budgets and an increasingly cinematic style are beginning to attract top Hollywood talent to computer versions of "The Matrix" and "The Lord of the Rings," as well as to original game projects such as "Grand Theft Auto: Vice City."

When Perry started work on "Enter the Matrix," a game version of the upcoming sequel "The Matrix Reloaded," the film's writer-directors, Andy and Larry Wachowski, promised unprecedented cooperation.

They created a new story that wove in and out of the movie plot, and shot an hour of footage exclusively for the game using the same cast, crew and sets as the film.

"This is where the page turns and the new chapter begins," Perry said. The game is set for release on all game consoles May 15 - the same day the movie opens.

Jada Pinkett Smith, who co-stars as Niobe in the film, is the game's main character, while stars Keanu Reeves, Laurence Fishburne and Carrie-Anne Moss take on supporting roles.

"I just thought it would be cool to see myself as a video game character," she said. "I was surprised to know how extensive it was going to be. ... This was much more difficult (than film)."

It is newcomers and supporting players like Pinkett Smith who will show A-list actors how to reach new fans through game acting, predicted LucasArts designer Jon Knoles.

For instance, his recent game "Star Wars: Bounty Hunter," about the masked mercenary Jango Fett from "Star Wars: Episode II - Attack of the Clones," was a chance for actor Temuera Morrison to expand on his character, a favorite among "Star Wars" fans.

Sometimes, celebrities find it's just hip to do digital cameos.

"Video games used to have really poor acting, since the voice stuff was Joe the programmer in front of the microphone," he said. "The quality is being bumped up."

Another fusion of Hollywood and Silicon Valley was the recent Electronic Arts game "The Lord of the Rings: The Two Towers," which used the film's stars Ian McKellen, Viggo Mortensen and John Rhys-Davies to provide dialogue for the action sequences.

As players fight their way through the levels of Middle-earth, they are also rewarded with documentaries about the movie and footage of the stars.

"The Two Towers" game producer Neil Young said that consulting with the movie's director, Peter Jackson, helped him "capture the core essence and language of the film," since both projects were being assembled simultaneously.

Filmmaker involvement is crucial to coordinating the release of game adaptations with the movies, said Activision executive Kathy Vrabeck, since games typically take at least a couple of years longer than films to create.

Filmmaker Sam Raimi's assistance on Activision's "Spider-Man" helped ensure that it was out two weeks before the movie last summer, and the company is already working with Raimi on the game version of the sequel due in 2004.

On Activision's recent "Minority Report," director Steven Spielberg consulted with game developers on the look of his futuristic world and on his crime-and-punishment themes. The game lacked the rights to star Tom Cruise's image, however, so designers had to make the main character tall and blond - unlike Cruise - which broke some of the continuity established by Spielberg's help.

"You're playing in the same world, with the same goals, same gadgets, same kind of plot - but it's not ideal," Vrabeck said.

The makers of the new LucasArts "Indiana Jones" games have had a similar problem trying to render their character without the help of Harrison Ford. For "Indiana Jones and the Emperor's Tomb," due Feb. 21, they studied photos and film footage to assemble something close to his likeness - including his signature chin scar.

Some game makers try to attract stars by minimizing the workload.

The team designing the recent James Bond game "Nightfire" persuaded actor Pierce Brosnan to undergo a few minutes of digital facial scanning, but did not push for him to do the voice recording and character movements, said Scot Bayless, who oversees the franchise for Electronic Arts.

Next time, Bayless said, they hope he'll agree to do more.