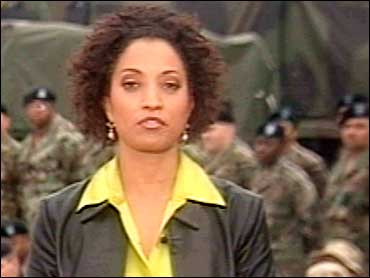 With the men and women of his 3rd Infantry Division advancing on Baghdad, their rear detachment commander, Major Charles Auer, is looking after their families back in Fort Benning, Ga.

The Early Show co-anchor Rene Syler spent Friday at the Army base, which is home to the 598th maintenance company. They provide construction, maintenance and transportation for the infantry division.

"You watch them on TV all the time and they're doing an outstanding job," says Auer. "I wish I was there with them." But his main function is to take care of the families, the facilities and the soldiers who are at Fort Benning now.

"I've had a couple of phone calls from our brigade assistant, asking who was in the Final Four the other day," Maj. Auer says with a laugh, referring to the NCAA basketball championship games. "They're getting their mail, getting their supplies and they all seem like they're doing very well," he continues.

The 3rd Brigade is a mechanized infantry. It has about 3,600 soldiers and about 95 percent of them have been deployed to Kuwait. Maj. Auer says, "Every time that I've talked to them they always tell me that the morale is high. They're doing a great job. They've moved farther and faster than anyone in history. I think everyone's very proud of what they've done over there."

While at home, he is doing his best to take care of the families of soldiers deployed.

"We have an outstanding family readiness group," he says. "We were set up from our last trip; we were in Kuwait last year at this time for 'Operation Desert Spring.' So out of the last year, the brigade has been deployed nine months of it. So our families were kind of a little bit prepared."

They even have a Web site for families, he says. But with all the preparations, there is always room for unpredictability.

"There are always things that happen that are unexpected," Maj. Auer says. That's when he and the commanders use Army community systems in place to assist the families.

"I think everybody is very proud of how our military is doing, how our armed forces are doing over there," he adds. "At least I am. We're doing a great job over there. Our soldiers, sailors and Marines, airmen are just doing an outstanding job. I'm proud to be an American, right now."