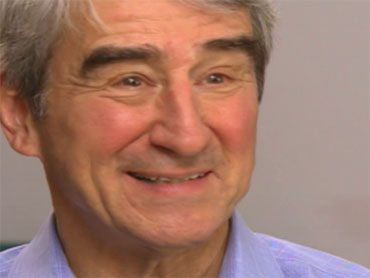 Whatever the role, Sam Waterston projects a rock-solid image that has won him an unshakably loyal following. Anthony Mason explores how he's been able to do that in this Sunday Profile:

Sam Waterston was warned early and often that acting was an "unreliable" profession.

"I mean, the truth is that at any time in this business you could fall off the edge of the world," he said.

But then, on the NBC series "Law & Order," he stumbled on the rarest thing in his business: A steady job:

For 363 episodes, he has played Jack McCoy, the quiet but tenacious district attorney.

NIH director: The COVID vaccine is "an answer to prayer"

This year it got him a star on the Hollywood Walk of Fame.

He said that notwithstanding everything else he's done, the role which has earned him 3 Emmy nominations was the reason he was there.

"I backed into appreciating it though, for sure," he told Mason.

"You have to understand that I came to show business from my father's point of view, which was that the theater, the classics, were respectable and worthy of interest; that the movies were silly; and that TV was really beneath contempt."

"So how did you find yourself taking a job in television, the industry that was beneath contempt?" asked Mason.

"Well, look at the things I've gotten to do in television," Waterston said.

His first major TV role, in the early 1980s, was in the PBS miniseries "Oppenheimer," playing the physicist who led the development of the nuclear bomb.

In the early nineties, he played a southern district attorney in "I'll Fly Away," the acclaimed series that dealt with civil rights.

When that show was canceled, he joined the cast of "Law & Order": 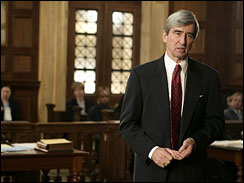 (AP)
Sixteen years later. he no longer has to be persuaded about the power of television:

"I can't tell you the number of people who have come up to me on the street and said, 'I'm a lawyer because of you.'"

Waterston, who'll turn 70 later this year, grew up along the New England coast.

His father, George Waterston, not only taught languages, but he also directed the school plays. Sam says the acting bug came from him.

"He gave me a job, my very first acting job," Waterston said. "I was six years old. And it was at the school where he taught, at Brooks."

His breakthrough came in 1972, playing Benedick in the New York Shakespeare Festival's production of "Much Ado About Nothing." The show was such a big hit it was filmed for broadcast on CBS.

"Katharine Hepburn saw that and decided that it would be worth seeing me about playing her son in 'The Glass Menagerie,'" Waterston said. He was invited for a chat.

Hepburn's assistant showed the young actor into her Manhattan townhouse, Waterston recalled her entrance down stairs, "just like in a movie."

By the time Waterston left, he knew he'd got the part:

"She was very energetic and looked you right in the eye - wanted honest answers at all times. Every conversation was sort of a grilling. But what a great lady."

Waterston was struck by another lady he met that year: Model Lynn Woodruff, who would become his second wife.

It was a pivotal year. He also got a part in his first major motion picture, playing opposite Robert Redford in "The Great Gatsby."

"I was in a panic the first night. I didn't get any sleep at all," Waterston said.

One of the last scenes in the movie was set to be shot first. Anxious, Waterston phoned the director, Jack Clayton:

"He said, you know, 'Don't worry Sam. You'll just be looking out a window!'" Waterston laughed. "'And the nice thing about movies is, if we don't like it, we can come back and do it again. Now go to sleep!'"

"Gatsby" was mauled by the critics, but Waterston escaped with Golden Globe nominations for Best Supporting Actor and Most Promising Newcomer.

Woody Allen cast him in four of his films, including "Interiors," "Hannah and Her Sisters," and "Crimes & Misdemeanors."

But it was "The Killing Fields" that established Waterston as a star.

"It made a huge difference," he said.

His portrayal of Sydney Schanberg, the New York Times journalist who rescues a Cambodian colleague, earned him an Oscar nomination for Best Actor.

It also led him to join the board of Refugees International; he's been a member for 25 years:

"And that's important to you?" Mason asked.

He's also active on the board of Oceana, a group devoted to protecting the world's oceans and the fish who swim in them.

"It was partly because I loved this part of the world," he said.

The only cause he's more passionate about are his four kids, who are all in the business.

Daughters Elizabeth and Katherine are actresses.

"Did you ever sit them down and have a conversation and say, 'You know, maybe this isn't such a great idea'?" Mason asked.

Son Graham Waterston, a filmmaker, said, "His initial reaction was like a fearful gasp, and then full support."

Son James, also an actor, said there's another side to their famous father: "There's a huge side of him that's not being used by the industry. I mean, he's a really silly guy!"

Waterston did show that silly side on "Saturday Night Live," a far cry from "Hamlet."

He likes to play people in "morally ambiguous situations," he said. "If I say 'Hamlet,' does that suggest anything? People with crucial moral dilemmas, where it's not at all clear what the right thing to do is. I guess that's why I'm kind of a natural for 'Law & Order.'"

He may be one of TV's most enduring leading men, but Sam Waterston has never really sought the limelight. Success, his father used to say, is like smoking.

Okay, if you don't inhale.