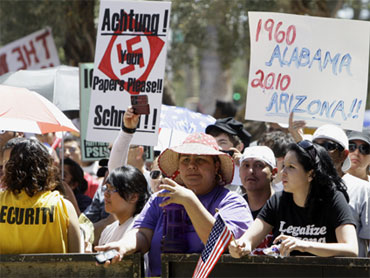 The critical comments by the nation's top law enforcement official and the Cabinet secretary responsible for preventing terrorist attacks on U.S. soil came four days after Arizona's governor signed a law designed to crack down on illegal aliens.

Arizona's new law is subject to potential abuse, Holder told a news conference. The law -- which takes effect this summer - allows police to question anyone about their immigration status if they have reason to suspect they are in the country illegally, and makes it a state crime if they are.

A number of options are under consideration including "the possibility of a court challenge," Holder said in response to questions on the Arizona law posed during a news conference on another topic.

Testifying before the Senate Judiciary Committee, Napolitano said the office of Immigration and Customs Enforcement fears it will have to use its stretched resources to deal with those arrested under Arizona's new law.

"We have some deep concerns with the law .. it will detract from and siphon resources that we need to concentrate on those in the country illegally, those who have committed the most serious crimes," Napolitano said.

President Barack Obama has instructed the Justice Department to examine the Arizona law that he said last week threatens to "undermine basic notions of fairness." He also is pressing anew for national immigration legislation, saying, "If we continue to fail to act at a federal level, we will continue to see misguided efforts opening up around the country."