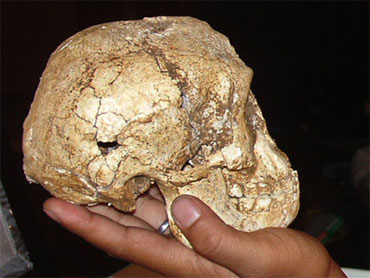 Hunched over a picnic table in a limestone cave, the Indonesian researcher gingerly fingers the bones of a giant rat for clues to the origins of a tiny human.

This world turned upside down may once have existed here, on the remote island of Flores, where an international team is trying to shed light on the fossilized 18,000-year-old skeleton of a dwarf cavewoman whose discovery in 2003 was an international sensation.

Her scientific name is Homo floresiensis, her nickname is "the hobbit," and the hunt is on to prove that she and the dozen other hobbits since discovered are not a quirk of nature but members of a distinct hominid species.

"They butchered the animals here," said the researcher, Rokus Due Awe, studying the toothpick-sized rat bones possibly left over from hobbit meals. Behind him, workers carried out buckets of soil from a cathedral-like cave festooned with stalactites, 130-feet underground.

The discovery of Homo floresiensis shocked and divided scientists. Here apparently was a band of distant relatives that exhibited features not seen for millions of years but were living at the same time as much more modern humans.

Almost overnight, the find threatened to change our understanding of human evolution.

Facebook is used to promote tobacco, despite policies against it

It would mean contemplating the possibility that not all the answers to human evolution lie in Africa, and that our development was more complex than previously thought.

Critics, however, dismissed the hobbit's discovery as nothing extraordinary. They continue to argue that the hobbit, just 3 feet tall with a brain the size of a baby's, was nothing more than a deformed human. Its strange appearance, they say, could be blamed on a range of genetic disorders that cause the body and brain to shrink.

The feud has played out in top scientific journals. But a growing consensus has emerged among experts on human origin that this is indeed a separate and primitive species that lived in relatively modern times - 17,000 to 100,000 years ago. The November issue of the highly respected Journal of Human Evolution was dedicated to the Flores findings and included a dozen studies supporting the hobbit as a new species.

Chris Stringer, research leader in human origins at the Natural History Museum in London, said the critics are "very much in the minority now." He said that he just returned from a meeting in Arizona of more than two dozen experts on human origins and found widespread support there for the new-species theory. No one, he said, "took the view that this was some weird, pathological freak."

William L. Jungers, a paleoanthropologist at Stony Brook University Medical Center who co-edited the Journal of Human Evolution issue, insisted the debate was over. He has published a study of the hobbit's feet which found it had traits associated with both modern humans and apes.

"This is a new species that cannot be explained by any known pathology," Jungers said.

(AP/William Jungers, SBUMC)
The mounting evidence has prompted Australian archaeologist Mike Morwood and his team to expand their research to the Soa Basin on Flores and the nearby Indonesian island of Sulawesi to answer several questions: Who were the hobbit's ancestors? Where did they come from? What were their interactions, if any, with the modern humans of the time? Why are they extinct?

Africa is central to any narrative about human evolution because it is believed that Homo erectus was the first hominid to leave the continent 1.8 million years ago, and most hominid fossils have been found there.

But the discovery of the hobbit, with its primitive traits, suggests that important stages in hominid evolution may have occurred in Asia, said Morwood, the coordinator of the hobbit dig. For example, he said, it may turn out that Homo erectus evolved in Asia.

"For many people, this was totally unexpected and indicates how little we know about hominid evolution, particularly in Asia," which may have "played a prominent role in some major developments in human evolution," he said.

Stringer, for one, believes the hobbit's ancestors could have been a forerunner of Homo erectus. If fossils are found to prove that, he said it would upend the belief that erectus was the first of our ancestors to make it out of Africa and eventually migrate to China and the Indonesian island of Java.

Instead, something more primitive may have left Africa, evolved into erectus and then returned to the continent.

"We'd have to say something got out earlier than that and we don't have any record of its evolution in the whole of Asia," Stringer said. "That means there is a complete missing chapter of the story of human evolution in Asia if that is correct. That would be very interesting and important if true."

Still, no one who supports the new-species theory suggests the hobbit is a direct ancestor of modern humans. Rather, they believe it represents a previously unknown branch of a pre-modern, hominid lineage.

Morwood, 59, a Willie Nelson lookalike with gray hair and grizzled beard, made his name studying Australian aboriginal rock art and originally came to central Flores in search of the Aborigines' ancestors

He first turned to the Soa Basin, a wind-swept savanna ringed by mountains, where Ngadha people still hunt pig and deer on horseback. Sites there produced stone tools dating back almost 1 million years which indicates Homo erectus or an earlier hominid species reached the island.

In 1999, Morwood accompanied his Indonesian colleagues to Liang Bua cave, which is hidden in the mountainside and overlooks rice paddies.

"Stepping into the cave for the first time, I was immediately struck by its size, and particularly impressed by its suitability for human occupation," Morwood wrote in "A New Human," his book about the hobbit discovery.

The team found a hobbit arm bone in 2001. Two years later, a worker hit what turned out to be a skull, and soon an entire female skeleton was unearthed. The researchers at the site that day - Due Awe and fellow Indonesians Thomas Sutikna and Wahyu Saptomo - knew they had found something special.

It appeared to be a child because of its size. But Due Awe determined it was an adult based on its worn molars. Even more perplexing, its brain was about one-third the size of a modern human one. Its short legs and potbelly appearance during its lifetime also closely resembled a famous, 3.2-million-year-old African fossil find nicknamed Lucy.

"Homo floresiensis is the only species out of Africa with those primitive body proportions," Morwood said. "You go to Africa and you are talking about hominids which are 2 million to 3 million years old. Here, you have a small-bodied, small-brain hominid that lived to a mere 17,000 years ago."

Recognizing the importance of his find, Morwood called in other experts to examine the remains from teeth to toes and determine whether the hobbit was a new species or a diseased, modern human.

Findings suggested a new species: teeth showed similarities to ancestral species, the brain looked nothing like a diseased modern human's, and a wrist looked like it came from an ape or early hominid - not a modern human.

If it is a new species, then who were the hobbits' relatives?

One theory is that the hobbit actually evolved from the much taller and big-brained Homo erectus.

Once Homo erectus reached Flores, according to this theory, it succumbed to what is called the island rule, where animals bigger than rabbits shrink in size because of limited food, and those smaller grow larger because of the absence of predators.

There are plenty of examples of that on Flores, where elephants shrank to the size of cows, while rats grew as big as dogs.

But Morwood, Jungers and others note that this evolutionary process has never been documented in a human population.

They believe the hobbit is descended from a more primitive relative of Homo erectus such as Homo habilis, which lived as early as 2.3 million years ago - before hominids are believed to have left Africa. They maintain that the ancestor evolved over nearly a million years to become Homo floresiensis.

To settle the debate, Morwood says, they need to find bones of the hobbit's ancestors and see whether they resemble Homo erectus or a more primitive hominid.

Already, the team has identified charred and chipped remains of Komodo dragons and pygmy elephants, proving the hobbits cooked over fires. Stone flakes found in the cave show these tiny people hunted and scavenged much larger animals.

This year, the team plans to excavate a spot around a boulder at Liang Bua that is among the most promising untouched areas of the cave. On their wish list is another hobbit skull, more teeth and wrist bones.

"It would be nice to have a whole complete male," Morwood said.
By AP Environmental Writer Michael Casey