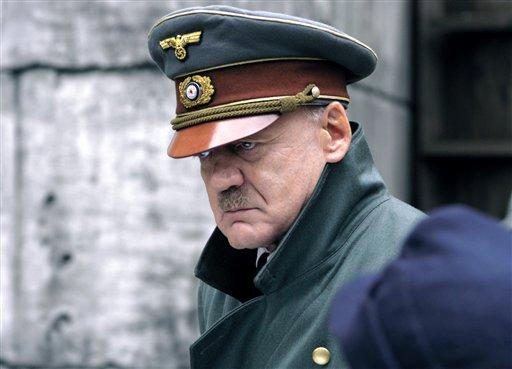 Adolf Hitler, for years a vessel of frustration in a popular Internet meme, has been quieted.

"Downfall," a German film released in 2004 about Hitler's last days, has been adopted for wildly popular YouTube parodies that have spanned mock rants about topics as varied as playing Xbox video games to Kanye West to Apple's new iPad.

Every spoof is from the same scene in the film: A furious, defeated Hitler, played by Bruno Ganz, unleashes an impassioned, angry speech to his remaining staff, huddled with him in his underground bunker.

The scene takes on widely different meaning when paired with English subtitles about, say, a late-season collapse by the New York Mets. Most any subject could be - and was - substituted, made even funnier by the scene's intense melodrama, artful staging and timely cutaways.

It was the meme that refused to die - until it did.

On Tuesday, the clips on YouTube, many of which had been watched by hundreds of thousands, even millions, began disappearing from the site. Constantin Films, the company that owns the rights to the film, asked for them to be removed, and YouTube complied.

Martin Moszkowicz, head of film and TV at Constantin films in Munich, said the company had been fighting copyright infringement for years. Jewish organizations have also complained about the tastefulness of the clips, he said.

"When does parody stop? It is a very complicated issue," Moszkowicz said. "So we are taking a simple approach: Take them all down. We've been doing it for years now. The important thing is to protect our copyright. We are very proud of the film."

Abraham Foxman, national director of the Anti-Defamation League, said the league was "delighted."

"We find them offensive," said Foxman of the videos. "We feel that they trivialize not only the Holocaust but World War II. Hitler is not a cartoon character."

Moszkowicz disputed the idea that all the attention to "Downfall," which grossed $5.5 million at the U.S. box office and was nominated for a best foreign language film Oscar, had helped the film.

"We have not been able to see any increase in DVD sales," he said. "There is no correlation between Internet parodies and sales of a movie, at least not that I am aware of."

Moszkowicz said he didn't know why the videos were only recently taken down and suggested that it could have been "something on the YouTube end."

Some have argued that, being parodies, the videos are protected under "fair use," the legal doctrine that holds that the use of some creative works for purposes such as parody and education may be considered "fair."

The site's policy about content that infringes on copyright is that it will remove videos if the copyright holder requests it. Using "Content ID" technology, the site is able to digitally search through its enormous archives and automatically remove any videos in violation.

That's a process that typically takes days or weeks.

However, YouTube promotes the ability to monetize such videos and allow the copyright holder - if it chooses to allow the user-uploaded videos to remain - to earn a percentage of advertising from the clips. YouTube claims that the majority of the more than 1,000 media companies using its Content ID technology opt for this route.

Many Hitler clips were still online Wednesday, and new parodies were popping up featuring Hitler ranting about his removal from YouTube.

For years, the meme has held an unusually steadfast position in Internet culture. While most online parodies come and go overnight, new "Downfall" spoofs have been continually created for years. It's not known exactly how many have existed but estimates run in the hundreds.

They have served as a kind of soapbox for real and mock anguish, a way to comically vent about anything and everything.

The film's director, Oliver Hirschbiegel, told New York magazine in January that he was constantly sent the parodies and he very much liked them.

"The point of the film was to kick these terrible people off the throne that made them demons, making them real and their actions into reality," Hirschbiegel told the magazine. "I think it's only fair if now it's taken as part of our history and used for whatever purposes people like. If only I got royalties for it, then I'd be even happier."

The loss was felt across the Web on Wednesday as if a grand, beloved tradition had been stifled.

In one of its most commented-on posts, the blog Techcrunch lamented that a voice had been lost, writing: "Memes on the Internet don't get any better than the Hitler one."