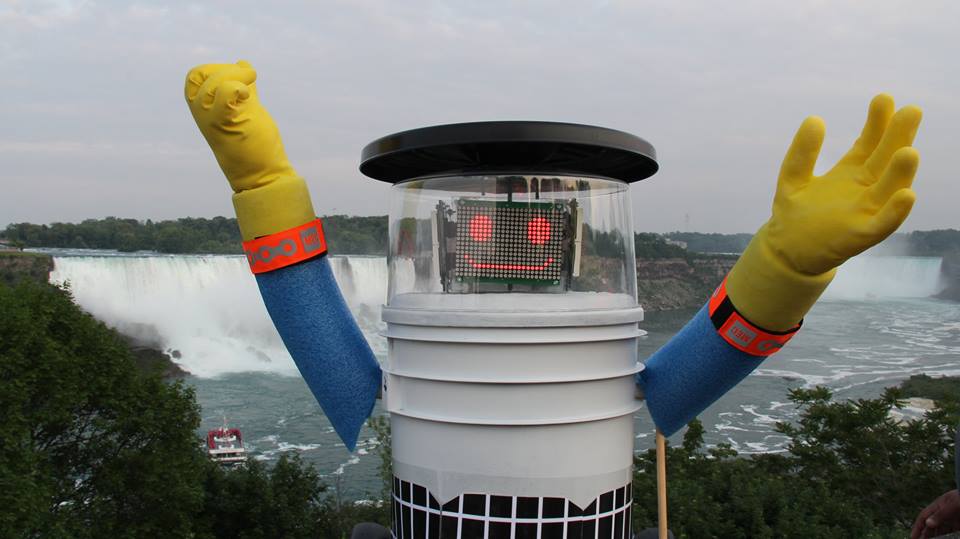 With its thumb raised skyward and a grin on its digital face, the robotic creation of two researchers in Canada is about to start a hitchhiking journey across the U.S.

The humanoid robot named hitchBOT has already caught rides across Canada and in Europe, relying on the kindness and curiosity of strangers. But on Friday it started its first U.S. tour, setting out from Salem, Massachusetts, with dreams of San Francisco ahead.

Along the way, it hopes to see some quintessential American sites, including Times Square, Mount Rushmore and the Grand Canyon.

The kid-size robot is immobile on its own, so it gets from place to place by being schlepped around by strangers. Travelers can pass it off to others they meet, or leave it at a gas station or shop. They can just leave it seated on its kickstand with its thumb raised.

Ideally, the creators hope, drivers won't leave the bot along busy roads and will charge the battery when it runs low. Otherwise, there are no rules.

"We want to see what people do with this kind of technology when we leave it up to them," said Frauke Zeller, one of the creators and an assistant professor in professional communication at Toronto's Ryerson University. "It's an art project in the wild - it invites people to participate."

On the outside, hitchBOT looks like it's built for play rather than performance. It has a bucket for a body and bendy foam limbs capped by yellow gardening gloves and matching rubber boots. The whimsical attire is intentional, its makers said, to make it approachable and to deter potential thieves.

"It has a really low-tech look to it, something we dubbed the 'yard-sale aesthetic,'" said David Harris Smith, the other creator and an assistant professor in communication studies at McMaster University in Hamilton, Ontario. "The head is actually an acrylic cake-saver."

Designed to be a talking travel companion, the robot can toss out factoids and carry limited conversation. It can be charming and cheeky, its makers said.

So far, there are no signs of anything nefarious done to the robot, but there's also no proof. Its creators intentionally cast their gaze aside.

"We want to be very careful to avoid surveillance technologies with this; that's not what we're trying to do here," Smith said.

A GPS in the robot can track its location, and a camera randomly snaps photos about every 20 minutes to document its travels. But the team behind the robot seeks permission from people in the photos before posting them to social media, where hitchBOT has built a devoted fan base.

More than 30,000 people follow the robot on Twitter, and dozens have posted their own selfies with it.

Friday afternoon, hitchBOT tweeted that it had caught its first ride in Massachusetts. The bot was photographed with its new East Coast friends holding a sign that read "San Francisco or Bust."

Researchers are culling data from social media to study how people interact with a robot that needs their help, unlike traditional robots designed to help them.

Among the chief questions researchers are asking, Zeller said, is whether robots can trust humans.

During past travels, the robot has attended a comic convention and a wedding, and it had its portrait painted in the Netherlands. It once spent a week with a heavy metal band.

The cross-country tour of Canada took 26 days, spanning more than 6,000 miles. As for the U.S. trip, researchers don't know how long it will take, or what will happen along the way.

"We want to create something that has a bit of narrative to it, a sense of adventure," Smith said. "We don't really know what's going to happen."