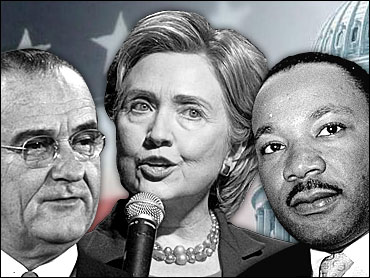 This column was written by Sean Wilentz.

In war, truth is the first casualty - but in politics, it appears that the first victim is history.

The latest maiming of the historical record and elementary historical logic has come over Martin Luther King, Jr., Lyndon B. Johnson - and the presidential primaries of 2008. The media echo chamber is now booming with charges that Senator Hillary Clinton has disparaged Dr. King, praised President Johnson in his stead, and thereby distorted the history of the civil rights movement. It is the latest evidence, say the talking heads, that Clinton is running a subtly racist campaign - or, as the theology and African-American studies professor Michael Eric Dyson worded it on MSNBC, that she is carrying a message with an "an implicit racial subtext."

Ben Smith of Politico was among the first to stir things up, charging that remarks by Clinton on MLK and LBJ offered "an odd example for the argument between rhetoric and action" that Clinton has been making in her contest with Senator Barack Obama.

By the time the charge reached Maureen Dowd's column in The New York Times on Wednesday, it had morphed into a false claim that Clinton actually compared herself to Johnson - a comparison Dowd claimed she never thought "any living Democrat" would do in trying to win the New Hampshire primary. (Dowd had 1968 and Vietnam on her mind, which, unfortunately, was not the matter in dispute: civil rights.)

Now, Representative James E. Clyburn, the most prominent African-American elected official from South Carolina, has picked up the ever-changing story and implicitly accused Senator Clinton of denigrating Dr. King and the civil rights movement. "We have to be very, very careful about how we speak about that era in American politics," Clyburn told The New York Times.

So - let us very, very carefully look at that historical record.

In a pair of television interviews earlier this week, Clinton made the uncontroversial historical observation that Martin Luther King and the civil rights movement put their lives on the line for racial equality, and that President Johnson enacted civil rights legislation.

Her point was simple: Although great social changes require social movements that create hope and force crises, elected officials, presidents above all, are also required in order to turn those hopes into laws. It was, plainly, a rejoinder to the accusations by Obama that Clinton has sneered at "hope." Clinton was also rebutting Obama's simplistic assertions about "hope" and the American Revolution, the abolition of slavery, and the end of Jim Crow.

The historical record is crystal clear about this, and no responsible historian seriously contests it. Without Frederick Douglass and the abolitionists, black and white (not to mention restive slaves), there would have been no agitation to end slavery, even after the Civil War began. But without Douglass's ally in the White House, the sympathetic, deeply anti-slavery but highly pragmatic Abraham Lincoln, there could not have been an Emancipation Proclamation or a Thirteenth Amendment. Likewise, without King and his movement, there would have been no civil rights revolution. But without the Texas liberal and wheeler-dealer Lyndon Johnson, and his predecessor John F. Kennedy, there would have been no Civil Rights Act of 1964 or Voting Rights Act of 1965.

Hope, in other words, is necessary to bring about change - but it is never enough. Change also requires effective leadership inside government. It's not a matter of either/or (that is, either King or Johnson), but a matter of both/and.

Behind this argument over Clinton's comments lies a false, mythic view of the 1960s in which the civil rights movement supposedly pushed Johnson and the Democrats to support civil rights against their own will. In fact, the movement and the elected officials were distinct but complementary elements in the civil rights politics that changed America.

Civil rights protests mounted gradually after 1945. By the spring of 1963, amid the protests in Birmingham, Alabama, a civil rights revolution was plainly underway, undertaken by ordinary black Americans who had outrun their own leadership (including Dr. King), let alone the federal government. President Kennedy, who had to work with a conservative Congress dominated by Southern senators, had initially been cool to civil rights legislation, lest it doom his entire presidency. But he finally embraced the cause in a momentous speech to the nation on June 11, 1963, which became a prelude for a major civil rights act to come.

Kennedy's speechwriter, Theodore Sorensen, describes the June 11 address as a turning point in the history of civil rights politics as well as in JFK's presidency. Kennedy knew well, Sorensen observes, "that it would make other legislation impossible ... and he knew how much was riding on it, politically and historically. He knew all of that." Lyndon Johnson, perhaps as much as any politician of the time, understood the political and historical stakes just as well. As Senate Majority Leader, he had pushed through the Congress, in 1957, the first piece of civil rights legislation since the Reconstruction era.

Picking up the murdered Kennedy's mantle, Johnson used his mastery of congressional politics to push through the momentous Civil Rights Act in 1964. A year later, Johnson responded to the movement's battles in Selma, Alabama, by proposing and shepherding through to enactment the equally momentous Voting Rights Bill of 1965. And in June of that year, Johnson's famous commencement speech at Howard University launched what he called "the more profound stage of the battle for civil rights," which laid the foundation for affirmative action in hiring.

In all of these instances, Johnson responded with political courage as well as sincere conviction about racial equality, but, like Kennedy (and, for that matter, Lincoln) before him, he also needed events to create a climate when his political skills could be applied. Johnson's relations with Martin Luther King were often tense, and the two men parted ways in 1967 over King's opposition to the Vietnam War. On the fundamental issues of civil rights reform, though, Johnson and King were in close contact and worked together as allies. And when Johnson, in his speech to Congress on voting rights in 1965, quoted and embraced the civil rights battle cry - "We Shall Overcome" - Dr. King openly wept. He called Johnson at the White House. "It is ironic, Mr. President," said King, "that after a century, a southern white President would help lead the way toward the salvation of the Negro."

Martin Luther King led the movement; Lyndon B. Johnson supported that movement, played the politics, guided the legislation, and signed it into law. Both were indispensable to the civil rights successes of the 1960s. To acknowledge both denigrates neither man. Describing such an acknowledgement as a denigration of Dr. King is, at best, bad history. At worst, it is a manipulative and inflammatory racial appeal concerning a crucial era in American history - an era that needs very, very careful consideration indeed. Either way, the current heated rhetoric demonstrates that the utopia of post-racial politics has hardly arrived.
By Sean Wilentz
If you like this article, go to www.tnr.com, which breaks down today's top stories and offers nearly 100 years of news, opinion, and criticism