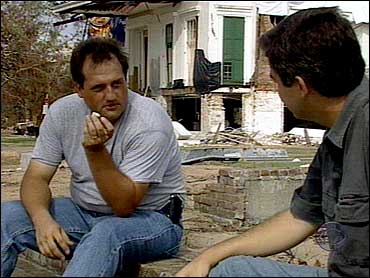 In the aftermath of Hurricane Katrina, most have naturally focused on the human cost — the many lives, homes and jobs lost to the storm.

In the mountains of debris piling up in Mississippi are some of this state's greatest treasures — literally consigned to the ash heap of history.

All along the Gulf Coast, mansion after glorious mansion lies in ruins — like one home that predates the Civil War. All that's left is the palm tree.

Another antebellum gem sits beneath a casino barge.

"The storm was truly a monster. It just ripped off the front porch and scattered it," says Patrick Hotard, the director of Beauvoir, a museum that was the last home of Confederate president Jefferson Davis.

Beauvoir survived the Civil War, but lost the battle of Katrina.

"And I was — just literally my mouth was just hanging open, 'cause I just couldn't believe it," Hotard says.

Hotard spends his days digging through the rubble and salvaging artifacts like a Confederate bullet, or "mini-ball."

"That's an example of sort of the small items that we have to look for amongst all of this rubble and debris," Hotard says of the mini-ball. "It's extremely trying on the soul."

Beauvoir's rebel uniforms and rifles are drying out inside a climate-controlled facility.

With all of this devastation, Katrina herself has made American history, leaving the south with its biggest reconstruction effort since the Reconstruction.

Also wiped out by a runaway casino barge was a house built by Biloxi's freed slaves.

"It just took my heart," says James Crowell, a museum board member.

The Pleasant Reed House was one of the region's only links to its African American heritage — and slated to become part of a sprawling multi-cultural museum.

"That history, that piece of history, has been lost?" Acosta asks.

"It's been lost, but it's still in our hearts and in our minds," Crowell says.

Crowell pledges all of it will be rebuilt.

"This was a dream that the community had," he says. "And we cannot let that dream die just because of this catastrophe."

Now, this state with such a turbulent history has a common dream: making sure Mississippi's rich past has a future.

"Years from now, people will be able to come back to this site and see the house," Hotard says. "And they'll say, 'This is like how I remembered it.'"