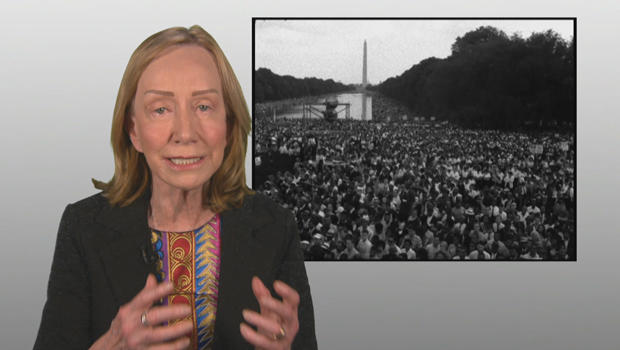 What to make of this complicated time in our nation's history? Some thoughts from Pulitzer Prize-winning historian Doris Kearns Goodwin, author of "Leadership in Turbulent Times":

Everywhere I go people stop to ask, "Are these the worst of times?" No, they're not; history reassures us.

Imagine Abraham Lincoln entering office with the country about to rupture into a civil war that would leave more than 600,000 dead.

Imagine Theodore Roosevelt thrust into office when conflict between the rich and the poor had grown so intense that talk of revolution filled the air.

Imagine Franklin Roosevelt coming into power when the Great Depression had paralyzed the economy and the spirit of the country.

Imagine Lyndon Johnson taking office in the wake of Kennedy's assassination, when a civil rights bill was mired in Congress and racial issues seared the country.

Although these four leaders possessed skills and strengths uniquely suited to guide us through, leadership in a democracy requires a two-way street.

At each crisis, healing change percolated from aroused citizens joining together with their leaders toward a moral purpose. The antislavery movement, the progressive moment, the civil rights movement all laid the foundation for enduring change.

While today's disunity is not as dire, it is potentially deeply damaging. Theodore Roosevelt warned that the rock on which democracy would founder would be when regions, classes, races and parties regarded one another as "The Other," rather than as citizens marked by fellow feeling, banding together for the best interests of our country.

We must remember, as Franklin Roosevelt insisted, that problems created by man can be solved by man, so long as we pull together toward a common end.

And there are many encouraging signs of healing – a wide and deep burst of citizen activism, young voices, a diverse raft of new candidates, including record-breaking numbers of women.

Whether the change we seek will be positive and inclusive depends not only on our leaders but on us. What we as individuals do now, how and if we unite, can make all the difference.

It is time for us to heed Abraham Lincoln's plea that we engage together in "calm and enlarged consideration ranging far above personal and partisan politics." I believe the renewal of the moral vision and purpose that built and sustained us in past turbulent times can do so again.