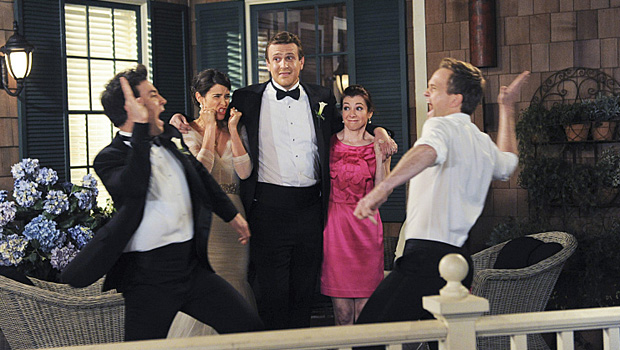 How will it all end?

For nine seasons, we've watched as Ted, Marshall, Barney, Robin and Lily navigated their 20s and 30s in New York City on CBS' "How I Met Your Mother."

From marriage and breakups (including getting left at the altar), to Barney's "Bro Code" and the gang's ongoing Slap Bet (with the supposed final slap taking place last week), the CBS sitcom has brought viewers plenty of laughs and some touching moments, too. For the gang, the journey has been ...wait for it..."legendary."

Now with the one-hour series finale upon us, viewers are wondering how the creators will tie up all those loose ends.

What we do know is that Barney (Neil Patrick Harris) and Robin (Cobie Smulders) are married; they exchanged vows during last week's penultimate episode.

We also know the Mother is played by Cristin Milioti -- she was revealed at the end of season 8. And although she and Ted are pictured in scenes set in the future, her character has yet to meet Ted during Barney and Robin's wedding weekend in Farhampton.

Lips are sealed on the specifics of the finale, but theories abound over how it will wrap. One theory that has gained traction? The Mother has been dead this whole time. Perhaps that's why Ted (Josh Radnor) has been telling his teenage kids the story of how he met their mom.When asked about the death speculation, Milioti told The Hollywood Reporter, "That's insane...There are some crazy conspiracy theories, which actually makes me really love the fans more...That's so crazy."

Alyson Hannigan, who portrays Lily on the series, dodged the question when asked recently by TIME magazine, "We could all be dead. Who knows? But I just love that even though it's only [two] episodes left, people are still trying to figure out the end. As Barney would say, wait for it!"

More
No matter how it ends, series co-creators Carter Bays and Craig Thomas have had the vision for the show's finale since the very beginning. They've know exactly what they wanted to do. So much so that the final couch scene with Ted's children, played by David Henrie and Lyndsy Fonseca, was filmed back in 2006. The young actors were growing up fast, and Bays and Thomas didn't want to risk them looking much older if the series ended up staying on the air for a while.

"It's been the plan all along," Thomas said. "What you see on March 31 has been the plan. We leave the series with a certain message that we wanted to convey."

But with all the hype surrounding the finale, could "HIMYM" ever live up to it all? Hannigan told Jimmy Kimmel last week that she's not concerned about expectations, saying, "The writers really wrapped the show up the way the fans would want it to be wrapped up. They're going to answer all the million questions everybody has and more."

When CBS News caught up with actor Ray Wise, who plays Robin's dad on the show, he said fans are going to love the way the series ends in its ninth season.

"It's going to be beautifully resolved," he told CBS News.

Now after nine seasons -- the last of which took place over one single weekend -- it's time to say goodbye. A lot is expected to be shown in the finale, titled "Last Forever," which could span 17 years of the characters' lives.

"HIMYM" fans are encouraged to say farewell to the show here. And for those still mourning the loss, there's a spinoff coming: CBS is working on a pilot for "How I Met Your Dad" starring Greta Gerwig.

Tell us: How do you think "HIMYM" will end?