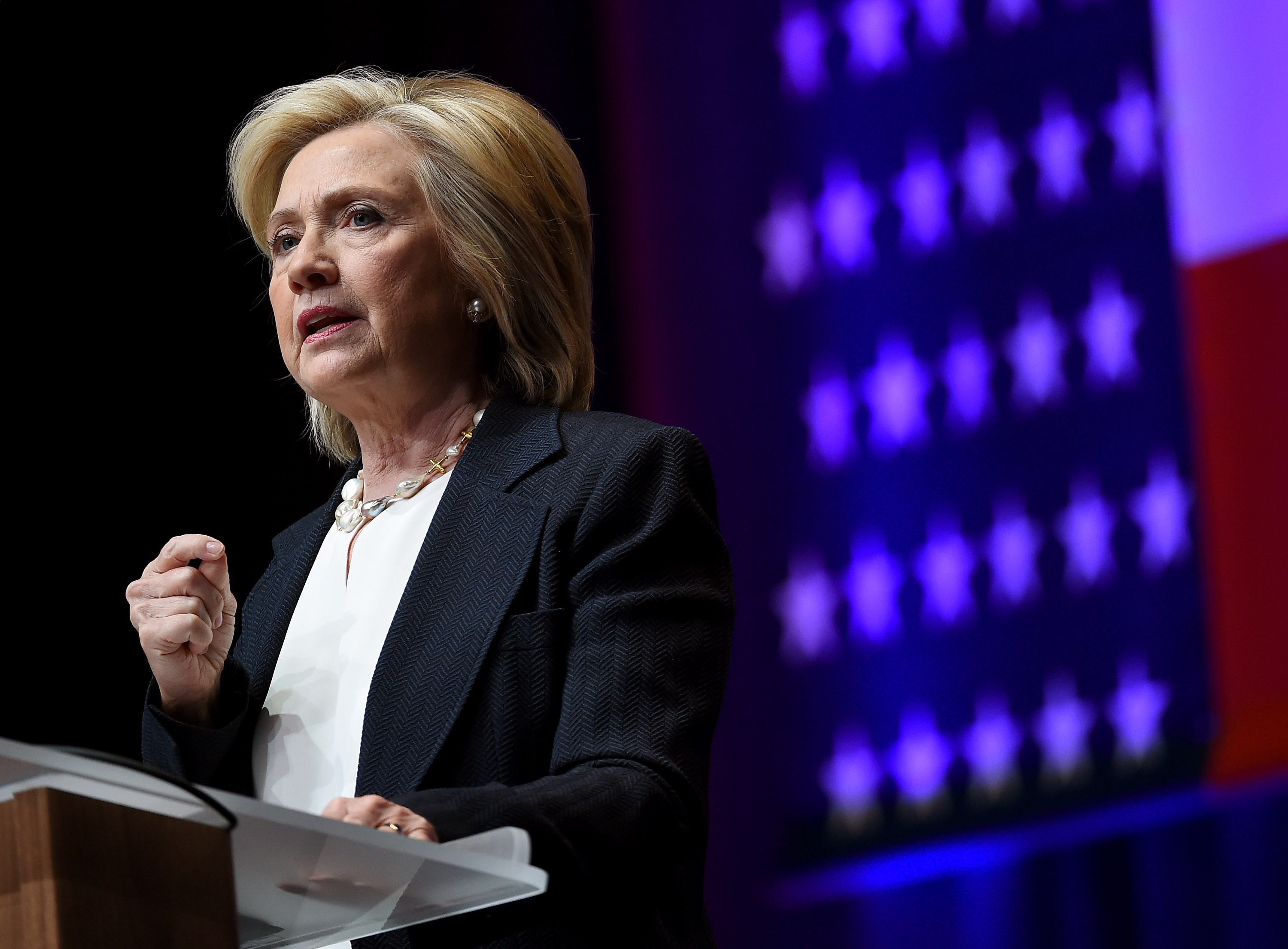 "How many innocent people in our country from little children to church members to movie theater attendees? How many people do we need to see cut down before we act?" Clinton asked a crowd of Latino political leaders in Las Vegas. "As we mourn and as our hearts break a little more, and as we send this message of solidarity, we will not forsake those who have been victimized by gun violence."

"This time," Clinton said, "we have to find answers together."

The Democratic frontrunner, who had spent Wednesday at campaign events in South Carolina, also called for honesty in the aftermath of the shooting.

"In order to make sense of it we need to be honest," Clinton told the annual conference of the National Association of Latino Elected and Appointed officials. "We have to face hard truths about race, violence, guns, and division."

In an appeal to her audience of elected Latino officials, Clinton also addressed immigration issues in her Las Vegas speech, drawing a line in the sand over the deportations of young undocumented immigrants.

"I will stand up against any attempt to expose DREAMers to deportation," Clinton said, referring to those immigrants who qualify under Deferred Action for Childhood Arrivals (DACA) program. "And as I said recently in Las Vegas, if Congress refuses to act, as President I will do everything under the law to go even further than what President Obama has attempted to achieve."

And though several Republican presidential contenders were not in attendance at the NALEO event -- instead choosing to attend the Faith and Freedom Coalition Conference in Washington, D.C. -- the issue of immigration was not far from their minds.

Immigration protestors interrupted Florida Sen. Marco Rubio while he gave a speech at the conservative cattle-call Thursday, yelling for the GOP hopeful to "protect DACA" and "implement DACA."

Kentucky Sen. Rand Paul, who spoke after his fellow GOP contender for the White House, poked fun at the interruption.

"Are there any protestors left?" Paul asked, taking the stage after Rubio. "Come on. If there are we could start with a first question from a protestor."

"I believe that in the greatest democracy on earth, we should be making it easier for people to vote, not putting up new barriers that disempower and disenfranchise Americans," Clinton said. "And who are those barriers aimed at? You know who they're aimed at. Young people, poor people, people of color, even the elderly."

Clinton also promised to fight for early childhood education and to make "quality childcare available to every child in America."

"In my campaign, I'm making early learning and childcare top priorities, setting a course for every four year old in America to be able to access high quality preschool in the next ten years, everywhere," Clinton said. "In every community you represent, in every state of our country."

She also reiterated a proposal to reduce youth unemployment which she made in South Carolina on Wednesday -- a plan that would give a $1500 tax credit to businesses for every young apprentice hired.

Ben Carson, who launched his bid for the White House in May, was the only Republican presidential candidate to take the stage at NALEO, despite invitations extended to all GOP hopefuls. He laid out a plan for securing the border, saying he intended to "seal our borders completely"

"The reason I think we need to seal our borders completely, all of our borders--north, south, east, west--is not so much because I'm afraid of somebody in Honduras," Carson told a crowd Tuesday. Rather, Carson said, it's because "I'm afraid of someone from Syria that wants to bomb us and wants to do bad things."

Carson also proposed creating a guest worker program for the nearly 11 million undocumented immigrants currently living in the United States. The Republican candidate's plan to remove undocumented immigrants "from the shadows" would require them to pay back taxes to the Internal Revenue Service and to "wait in line" in order to apply for citizenship.

"We need to be looking at ways that we can share the wealth and still maintain our borders and integrity," Carson said.