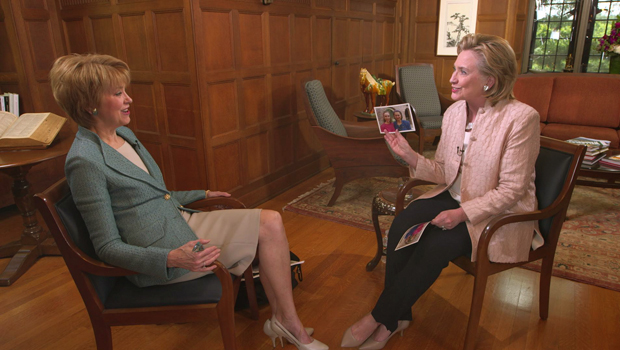 The days of calling Hillary Clinton "Madam Secretary" are over. Now, the question is whether she's again contemplating a run for an even more august title. You no doubt have heard about her new book "Hard Choices" (published by CBS' Simon and Schuster). Several days ago the former first lady sat down with our Jane Pauley for some Questions and Answers...

Beneath the tower of Green Hall, by the shores of Lake Waban, Wellesley College alumnae returned last weekend to their alma mater -- among them, former first lady, U.S. Senator and Secretary of State Hillary Clinton, Class of 1969.

She laughed as she recognized photos of herself from when she was 21 ("Oh my gosh. Yes. Boy, I had long, long hair."

"What are you laughing at?" asked Pauley.

"I'm laughing at my gestures."

And the pants? "You know what, I have to tell you -- I've never been a fashion icon, in case you haven't noticed, but this was a particularly bad choice."

A Life magazine layout (left) was her first appearance on the national scene, at age 21. The Wellesley Class of 1969 had expressed a desire for one of their own to speak to them, and for them.

Ruth Adams, President of Wellesley in 1969, said then, "There was no debate so far as I could ascertain as to who that spokesman was to be."

"The challenge now," Rodham said in her speech, "is to practice politics as the art of making what appears to be impossible, possible."

The night before her speech, an older woman told Clinton she wouldn't trade places for the world with her, given what the world was coming to, and that in effect, she was afraid. Clinton responded: "Fear is always with us, but we just don't have time for it, not now."

She's had time lately to think. and to write. Her new book, "Hard Choices" (from CBS' Simon & Schuster), is about her four years as secretary of state in the Obama administration.

"You have a good working relationship," said Pauley. "Would 'friendship' be appropriate?"

"You did clear your throat before you said that!"

"But -- yep! Let -- let-- let me -- let me take a drink of water. When then-President-elect Obama called me, he pushed me hard to accept his offer to be Secretary of State.

"And finally I said, 'Yes.' And he said, 'Contrary to reports, I think we can become good friends.'"

"There's a moment from your book where the president takes you aside, and I think you're expecting some, you know, important consultation. And he says, 'You've got something in your teeth.'"

As Secretary of State, she famously traveled nearly a million miles. What does she say she accomplished?

"How do you quantify that accomplishment?" asked Pauley.

"We quantify it in a number of ways. Clearly, ending our role in the war in Iraq. In Afghanistan, putting more troops in, in order to try to beat back the Taliban advance so that we could get to the point where we are today, that they've had a peaceful election. Taking on the challenges that are posed by Iran. Getting Russia and China on board to pass tough sanctions in the U.N. Security Council. Negotiating a cease fire in Gaza to try to prevent a war.

And I think we laid the groundwork for the world as it is and how America has to engage in it."

She writes as well about secret talks to win the release of an American held prisoner by the Taliban: "In every discussion about prisoners, we demanded the release of Army Sgt. Bowe Bergdahl."

Pauley asked Clinton what she thinks happened the night Bergdahl went off base.

"I have no idea," Clinton said. "I think that's going to be, I hope, at least clarified by the Army investigation that's been promised. But I agree with all those who have said, starting with the president, going to our military leadership that it's just a core principal: You don't leave anybody behind."

But Sgt. Bergdahl's recent release has only inflamed the president's critics.

"Is there really any question, in your mind, that it violated the administration's own principle, 'Don't do stupid stuff?" asked Pauley.

"Jane, I don't think any of us, and even I, who served for four years in the administration, can from the outside make that judgment," said Clinton. "This was, as I am told, a decision by the military, the intelligence community, the State Department, and the White House."

"And yet, Senator Lindsey Graham is talking about impeachment."

"Well, that's not the first time, I must say!" Clinton laughed. "These are imperfect decisions made by imperfect people based usually on imperfect information."

"Yes. There was a very legitimate difference of opinion," she said. "This was a hard choice. And when the time came, we're in the Situation Room. I happened to recommend that it go forward, and that [Mr. Obama] make that decision. But I was fully aware that he could be riding his presidency on it."

"Your presidency was on the line, too," Pauley laughed. "Let's assume."

"Let's assume hypothetically. Your potential presidency would have been on the line, too."

"But at that point, I was very much in the mindset, I'm not gonna run, I am ruling it out. And so that never crossed my mind."

There are plenty of other things to think about these days. For example, her daughter.

Pauley asked, " How's Chelsea? Is she having a good pregnancy?"

"Yes. And I could not be happier for her or her wonderful husband, and for Bill and me."

But clearly, being a grandmother is not all that's on her mind; Hillary Clinton is weighing another run for president.

"I'm not yet kind of making the list that I like I do, the pros and cons," she said. "I'm just sort of living my life and seeing how it all feels to me."

"And asked every single day?"

"President Clinton told somebody who was with us in this room, personally, 'Hillary says everyone's sick of the Clintons.' Is that how you feel?"

"Well, a lot of people have said that besides me," Clinton laughed. "That wouldn't influence my decision one way or the other, because I think the voters have to the right to choose whoever they want."

Pauley asked if health were an issue. "No," Clinton said. "For me, personally, no, thankfully. I fell on my head and got a concussion, and worked through the, you know, lingering affects of dizziness and double vision. That's all gone, and I'm 100%."

And then there's Benghazi.

"Your explanation," said Pauley, "will never satisfy everyone."

"As I write, this was in the fog of war," Clinton said. "And there were a lot of confusing pieces of information flooding into us from the very first moment. We did our best to sort it out. I did my best to fully cooperate with the Congress. I respect the Congress's oversight responsibility. But there's a difference between unanswered questions and unlistened-to answers."

Still, it's obvious she's looking forward as well as back.

"Look, the most important questions for anybody thinking of running for president are not 'Will you run and can you win?' There is, 'What is your vision for America? And can you lead us there?'" Clinton said. "And if you don't have a clear-eyed sense of what it's going to take to restore our strength and our fairness, our justice, and what we're going to do in this increasingly complex, interconnected world, you shouldn't run.

"It's not a contest for, you know, who looks good and who can have the quick answer, and all the rest, who can get the most outside money. We don't have time for that right now."

"I'm smiling," Pauley said, "because I heard an echo of a 21-year-old Hillary Diane Rodham: 'We don't have time for that.'"

Pauley showed Clinton a list of countries that have already had a woman leader: "I was stunned -- it takes two pages to cover the list."

"And some more than once," said Clinton.

"It includes Bangladesh, Indonesia, Latvia, Liberia, Lithuania, the United Kingdom, of course. Are we waiting for alphabetical order?"

Some of Clinton's longtime Wellesley friends have been waiting since graduation.

Katherine Hall Page told Pauley that in 1969, "My parents said to me, 'If there was ever going to be a woman president, it's going to be Hillary Rodham."

Pauley took a vote of Clinton's classmates on whether she would decide to run; Page, Wendy Judge Paulson, Spenta Captain Kandawalla, and Karen Williamson all said "Yes."

"I'm thinking she has a lot to think about," laughed Kandawalla.

Pauley asked Clinton, "If not you, who? Who is the viable woman, of either party, who could win a primary nomination in 2016, if not you?"

"Well, I think there are any number of qualified women who are holding off . . . "

"But politics is so unpredictable. Whoever runs has to recognize that the American political system is probably the most difficult, even brutal, in the world."

"Here's why I think you're going to run," laughed Pauley. "You quote a poem in that speech [in 1969], T.S. Elliot: ''There's only the trying again, and again, and again to win again what we've lost before.' That 21-year-old girl you were will not take no for an answer, my prediction."