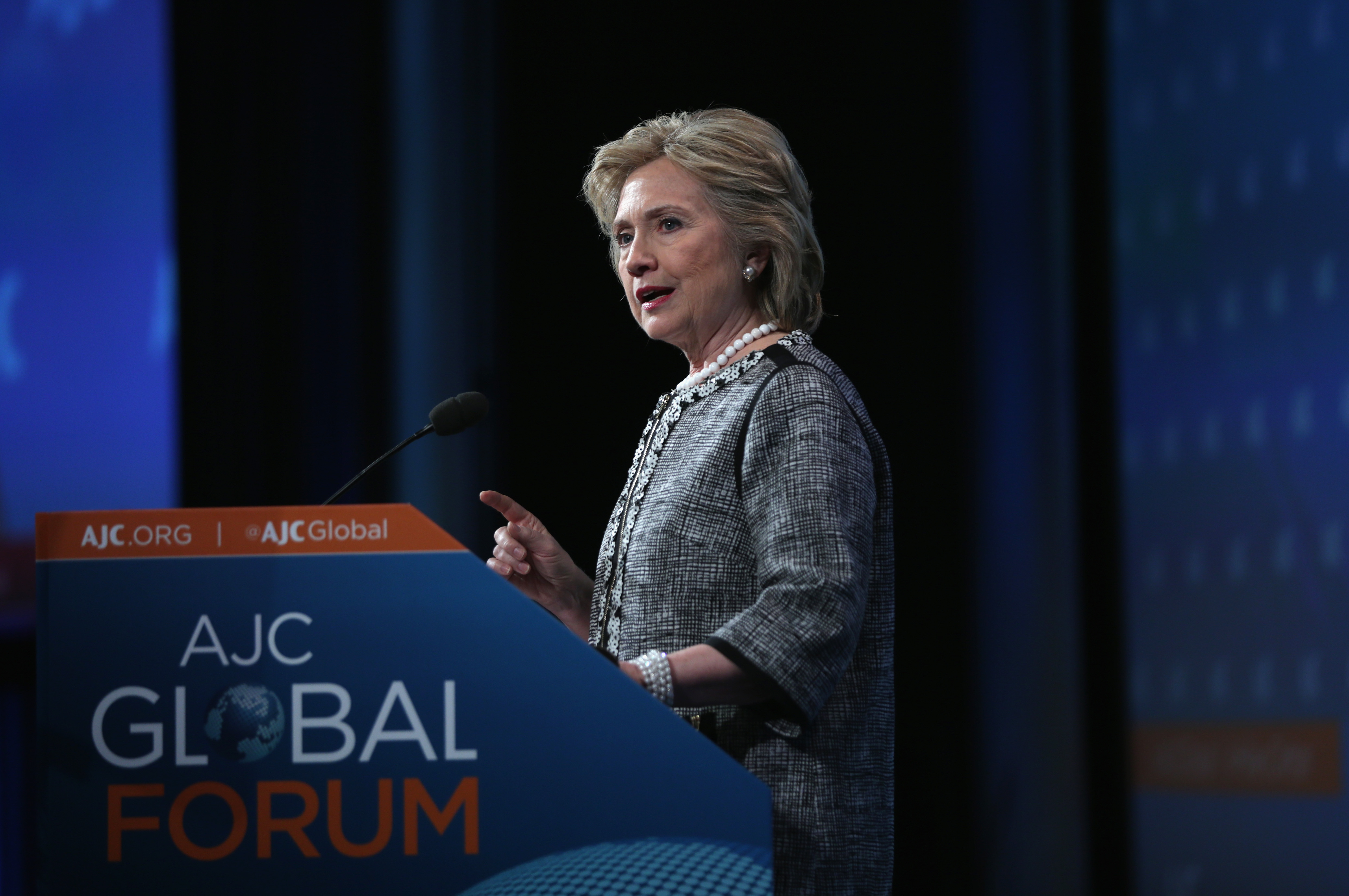 In a nod to the title of her upcoming memoir, Hillary Clinton on Wednesday detailed the "hard choices" she confronted on Iran's nuclear program and Israeli-Palestinian peace negotiations during her tenure as secretary of state.

During a speech before the American Jewish Committee, Clinton said she and President Obama successfully rallied the international community to impose sanctions on Iran and bring the Iranians to the bargaining table on their nuclear program. She also discussed the current state of talks between Israel and the Palestinians, saying the prior rounds of negotiations she guided as secretary of state impressed on her the difficulty of securing a lasting peace.

The remarks were among Clinton's most extended to date on her record at the State Department - a record that she is sure brandish if she runs for president in 2016, but one that critics have said is thin on tangible achievements. The former top diplomat left no doubt that she intends to claim credit for more foreign policy accomplishments than her critics are prepared to concede.

In 2008, she recalled, many believed Iran was "on the rise" -- its regional rival Iraq had been incapacitated by the 2003 U.S. invasion, and oil exports were booming.

To arrest that rise, Clinton said, she and the president decided to "tear up the old playbook and devise a new strategy."

"We decided to use both engagement and pressure to present Iran's leaders with a hard choice of their own: comply and reap the benefits of improved relations or refuse and face increased isolation and ever more painful consequences," she said. "We believed that the effort of seeking engagement would actually strengthen our hand if Iran rejected our initiatives. The rest of the world would see that the Iranians were the intransigent ones, not us."

"That is more or less what happened," she explained, saying Iran's rejection of U.S. overtures allowed the U.S. to persuade the United Nations Security Council to impose "some of the toughest multilateral sanctions ever on record."

"I worked for months to round up the votes," she said.

Paired with even more stringent U.S. sanctions, the international effort began to hammer Iran's economy, Clinton explained, strengthening the hand of more accommodating parties in Iran. With the election of new Iranian President Hassan Rouhani, the Iranians were back at the bargaining table, she said, where they're currently enmeshed in talks with Clinton's successor as secretary of state, John Kerry.

Clinton emphasized to the staunchly pro-Israel organization that she remains "skeptical" Iran will follow through on its obligations, but "nonetheless, this is a promising development, and we need to test it."

"No deal is better than a bad deal," she said. "The next months will be telling."

Turning to Israeli-Palestinian peace talks, Clinton noted that negotiations were recently suspended after Fatah, the preferred U.S. liaison to the Palestinians, announced it would seek reconciliation with Hamas, an organization seen by the U.S. and Israel as more hostile to the peace process.

That development is "obviously troubling," Clinton said. But however the internal Palestinian debate plays out, she added, "Expectations of Hamas must remain the same -- they must reject violence, honor previous agreements, and accept Israel's right to exist."

Clinton said she isn't surprised by the difficulty of the peace process. "Having worked, cajoled, and implored my way through three rounds of direct, face-to-face negotiations," she explained, "I can tell you that hard choices are exactly what it will take to achieve a just and lasting peace."

Clinton said there's no "great mystery" about the general outline of a peace deal, but the challenge remains mobilizing the "political will on both sides" to move the process forward.

Regardless of the outcome, Clinton said, "America's commitment to Israel's security will never waver -- that is not a hard choice."