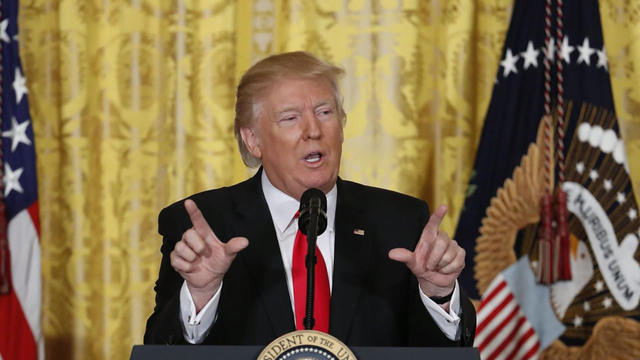 Under growing pressure to address threats against the Jewish community following another wave of bomb threats called into Jewish Community Centers around the country Monday, President Trump broke his silence on the issue Tuesday morning.

After previously deflecting a number of questions about the apparent rise in anti-Semitic incidents, Mr. Trump chose to address the issue at the end of his visit Tuesday to the new National Museum of African American History and Culture in Washington, D.C.

“This tour was a meaningful reminder of why we have to fight bigotry, intolerance and hatred in all of its very ugly forms,” the president said. “The anti-Semitic threats targeting our Jewish community and community centers are horrible and are painful and a very sad reminder of the work that still must be done to root out hate and prejudice and evil.”

His remarks followed days of increasing attention to the problem and weeks of anxiety within the Jewish community.

2016 presidential candidate Hillary Clinton tweeted Tuesday morning that the president should speak out against these incidents himself.

The Anti-Defamation League (ADL) also called on the administration to address these threats. The group issued a statement saying that the “threats themselves are alarming, disruptive and must always be taken seriously,” despite the fact that all of the threats so far have turned out to be hoaxes.

Later in the day, the president’s daughter, Ivanka Trump, tweeted about the bomb threats.

On Monday, a White House official put out this statement: “Hatred and hate-motivated violence of any kind have no place in a country founded on the promise of individual freedom. The President has made it abundantly clear that these actions are unacceptable.”

The head of the ADL, Jonathan Greenblatt, suggested on Twitter that Mr. Trump should speak out against the threats himself.

Mr. Trump dodged questions about a rise in anti-Semitism last week at two White House press conferences. On Thursday, for example, a Jewish reporter asked the president how the administration plans to address the issue and instead of answering it, Mr. Trump told the reporter to sit down and said it was “not a fair question,” then declared “I am the least anti-Semitic person that you’ve ever seen in your entire life.”