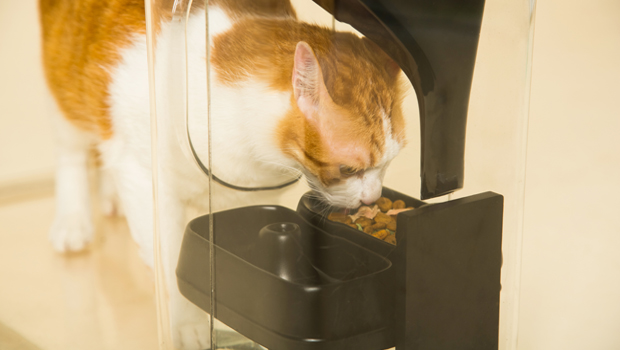 The system is called Bistro, and it has just topped its $100,000 goal on the crowd-funding site Indiegogo. Bistro uses facial recognition software to make sure that each feline, even in a multi-cat household, gets the care he or she needs.

Mu-Chi Sung, founder of 42ARK, a company that specializes in pet tech, came up with the idea after one of his three cats suffered a serious health crisis. Momo the cat became paralyzed and had to have two legs amputated. Sung was determined to not let the same thing happen to other cats.

With his experience in image processing and recognition, Sung developed Bistro, a device that serves as both an automatic feeder and a health manager for pets. Sensors track the cat's weight as well as its feeding and water habits, and the built-in camera, utilizing facial recognition software, differentiates which cats are eating if you have more than one.

"The Bistro system would have notified me within the first day that Momo's appetite had changed. It would also provide advice on what level of changes in appetite warrant a visit to the vet," Sung told CBS News in an email. "Had a vet been able to treat Momo at that early stage, the heart disease wouldn't have kicked in and created the blood clot which necessitated the amputation of her two legs."

A number of wearable devices already offer pet owners insight into similar health trends, such as calories consumed, calories burned, and the amounts of physical activity. However, Sung was less than optimistic about the use of wearables for cats. He notes that most cats are not as willing to wear collars -- "certainly, my three cats do not," he said.

"Bistro connects the cat, its owner and the veterinarian together. There is no other solution on the market that tracks critical health indicators and links the results together with those three parties in real-time," said Sung. "The overwhelmingly positive feedback we've received from vets across America confirms this."

The Bistro feeder has an estimated price of $249, but is being offered to Indiegogo backers for less. The feeder will begin shipping in February 2015, according to the company.

Sung's already thinking about the next step: Bistro for dogs, though it may pose greater technical challenges. He admitted that the Bistro team decided to focus on cats first because of their relatively uniform size -- making engineering problems faster to solve. But "we will begin the design and manufacturing process for dogs sooner if we see sufficient demand," he added.