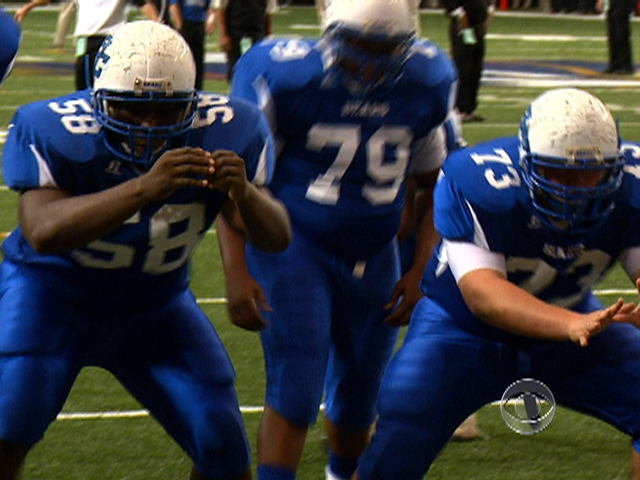 BURKE CO., Ga - A lot of things can cause a football team to have a bad season: a lack of good players or a lack of good coaching. But those weren't problems for the high school team CBS News correspondent Seth Doane found in Georgia. It lacked something most teams take for granted - good nutrition.

It seemed that half of Tiny Burke County turned out to cheer on the Bears recently. Against the odds, their high school football team had finally made it to the Georgia state championship.

Seventeen-year-old defensive lineman Jessie Bush remembers how different things were just four years ago. "A lot of people - they was hungry, tired, and sleepy sometimes."

Those were signs that his coach Eric Parker recognized as the dangerous symptoms of dehydration and malnutrition.

"We had kids who literally by Tuesday had to be removed from practice because of the intensity and the amount of energy they were having to expend," Parker said.

In Burke County, family income is so low that 85 percent of students already qualified for free breakfast and lunch in school. But many were going without any other meals at home.

"We're probably like most small towns in America right now - you know, we're struggling," Parker said. "So, bringing food home and putting it on the table for a lot of our people, you know, that's a big deal."

The idea that some students might be going to school or practice hungry probably wouldn't surprise anyone who knows Burke County, Georgia - one of the poorest counties in the country - where 48 percent of kids live below the poverty line.

It turned out, after doing some research, they could. Martin applied for federal funding through the Healthy Hunger-Free Kids Act. One year later, at the cost of $3 per meal, they provide dinner to 500 lower-income students.

Jessie Bush and coach Parker says that's paid-off on the field. "We started getting better," Bush said. "You didn't hear nobody coming out and saying they were tired or hungry."

"We were finishing games strong," Parker added. "We really had situations where in big games we got stronger as the game went along.

Parker led his team to the biggest game of all, and won the state championship.

"I'm not going to cut the nutrition program and what it did for us short at all," Parker said. "I thought it was a big part of our success." He added there's "no doubt" the nutrition programed played a part in the big win. It gave them a sweet victory on and off the field.