Although Syrian President Bashar Al-Assad has not met with two senior U.S. envoys, Damascus and Washington sounded upbeat on Saturday that their first high-level talks in the Syrian capital in four years would result in better ties between the two countries after years of tension.

Syrian Foreign Minister Walid Muallem sat with Acting Assistant Secretary of State for Near East Affairs Jeffrey Feltman and Daniel Shapiro, a senior staffer on the National Security Council, for four hours as both sides tested the waters to see what concrete offers will emerge as the countries seek a closer rapprochement. 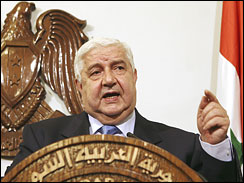 The U.S. is seeking greater co-operation on Iraq and hopes to pull Syria out of Iran's orbit. It addition, the new administration will likely urge Syria to exert pressure on Palestinian Hamas, whose leadership is based in Damascus, to implement a permanent cease-fire in Gaza, and end any influence in Lebanon to guarantee free elections there in June.

But diplomats doubt that Syria will abandon its political approach and give up its cards in exchange for mere overtures of cooperation.

Syria has indicated that it seeks no further quarrel with Washington, even saying it would like the new administration to mediate stalled Syrian-Israeli peace talks to restore the Golan Heights, to end sanctions, and to allow the inflow of Western investment and technology.

Syria suspended its indirect talks with Israel in December to protest the Jewish state's three-week military operation in the Gaza Strip aimed at Hamas militants. The assault left about 1,300 Palestinians dead, half of them women and children, and some 5,000 more wounded.

The visit by the U.S. top envoys, ignored by state-run newspapers in an indication of a cautious approach, has ended Washington's four-year diplomatic embargo in a bid to encourage Assad to help reshape the political landscape of the Middle East.

Assad, who was only 34 when he took power from his father Hafez in 2000, has turned out to be an incisive strategist who knows how to play his cards quite well.

"The discussion dealt with bilateral relations between the two countries and ways of strengthening them, in addition to exchanging views on the regional situation in order to achieve a just and comprehensive peace in the Middle East," read a statement from the Syrian Foreign Ministry.

The statement underlined that both sides' views were "identical towards the importance of continuing dialogue" between them to achieve the goals that serve their common interests and achieve security and stability in the region.

Diplomats suggest Syria might be an easier challenge compared with the difficulties of U.S. engagement with Iran and the dim prospects of a breakthrough on Palestinian-Israeli peace process.

"This is a very constructive discussion point," said Feltman after today's talks with Muallem

"We look forward to making progress in achieving results in the bilateral relationship and in terms of regional issues," he told reporters.

Though it is still early to speculate what may happen, Syria stressed its commitment to peace, an apparent effort to President Barack Obama to keep up his dialogue policy with this Mediterranean country that had been shunned under Bush.

The last senior U.S. official to visit Damascus was Richard Armitage, then a deputy assistant secretary of state, in January 2005.

Damascus denied involvement in Hariri's death, but in the uproar that followed, it was forced to withdraw its troops from Lebanon, ending a 29-year military presence.