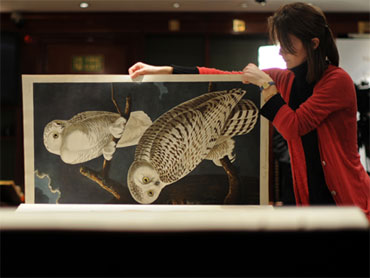 From partridges to swans-a-swimming, 184 birds in all are presented as gifts if you add up all the verses in "The Twelve Days of Christmas". According to this year's estimate by PNC bank, those birds would cost you $44,593.52 . . . small change compared to the tab for the pricey birds our Liz Palmer now takes us to see:

It's not ideal weather for bird-spotting, but David Lindo never let a little fog get in the way.

He's a well known figure on the British birding scene . . .

"By the age of eight I was taking out my fellow school buddies and showing them birds in the local woods," he said. "And I remember pestering my mum to get a pair of binoculars."

This morning's tally is low: A few starlings, and a shy carrion crow. No matter. Every sighting's a feather in Lindo's cap.

British birdwatchers are a competitive bunch, fighting to get the first glimpse of a rare species.

And one of the grandfathers of this national passion is a transplanted American.

"Ask any birder in this country, they would have known and heard about John James Audubon," said Lindo.

At Sotheby's auction house in London, up on the block was Audubon's masterpiece, "The Birds of America," one of the largest - and rarest - books in the world.

Most copies are in museums. There are only 11 left in private hands.

"It's the top dog, it's the number one," said Bernard Shapero, a London rare book dealer. "It's probably the most important book outside the Gutenberg Bible."

Born in Haiti but raised in the woods of Pennsylvania, Audubon was a self-taught naturalist with big ambition to catalogue and paint all the birds of America.

His 400 engravings - though scientifically accurate - are anything but clinical. Brimming with life, these birds look ready to fly off the page.

"His big thing was the one-to-one ratio," said Shapero. "Everyone else cropped the birds. 'No, no,' he said. 'If an eagle is 6 foot, he was going to paint it 6 foot.' He scaled back the wings, but it was life size. That was his cachet."

But Audubon's bird art didn't sell in the U.S. His unorthodox style had ruffled too many feathers. So, almost bankrupt, he decided to migrate to England.

Audubon arrived in England in 1826 dressed up like Daniel Boone.

The frontiersman image went over well in polite English society, and soon Audubon had sold his book project, parceled out five paintings at a time over 11 years.

"Audubon soon after his arrival in Great Britain was introduced to the aristocracy and to the scientific community, and in very short order he got subscriptions from the dukes, earls and the king," said Dr. David Goldthorpe, Sotheby's rare book expert.

At the age of 45, Audubon had at last gained both a fortune and a solid reputation as a naturalist.

"The irony is that he shot a lot of the birds to paint them," Dr. Goldthorpe said, "but in those days, that's what you did. He was a trained taxidermist - he would stuff them, and go back to his studio and arrange them on bits of wire, and paint from that."

"I'm a hunter, when I go out watching birds, I'm doing what he used to do, but with a pair of binoculars," said Lindo.

Sadly, even Lindo's binoculars can't bring some of Audubon's birds into view . . . they're extinct.

"I'm insanely jealous," said Lindo, "but I think most birders would be jealous. He saw species that I can't now."

Audubon's masterpiece was scientifically valuable and exquisitely beautiful . . . but not priceless.

Bang! "Sold for six and a half million pounds."

More than ten million dollars. The Sotheby's sale made it the world's most expensive printed book.

So who's the big league buyer? Lindo says, "Um, well, I scratched my chin at 6.1 million pounds."

Not quite enough. The new owner is Michael Tollemache, a fine art dealer in London. He called the book's design "a masterpiece of 19th century art."

One of America's most iconic books will remain, for now, in the country that gave John James Audubon his legacy.

For more info:
Sotheby's Sale of "Birds of America"